Cost, lack of awareness of resources named as top barriers to accessing mental-health support
Oct 30, 2020 8:00 AM By: Brandon Barrett 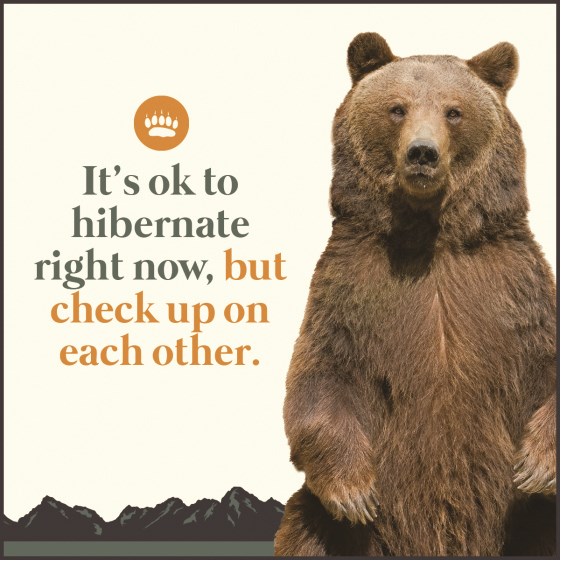 A new Whistler Blackcomb Foundation survey sheds light on Whistler’s mental and emotional well-being through the pandemic. Pictured is a promotional ad that was part of a mental-health awareness campaign launched by the Katz Amsterdam and Whistler Blackcomb foundations this summer. IMAGE SUBMITTED

The Whistler Blackcomb Foundation (WBF) has released the results of its recent mental-health survey, showing how Whistlerites are coping through the pandemic and offering valuable insights to service providers looking to knock down existing barriers to support.

Funded by the Katz Amsterdam Foundation, the survey was spearheaded by the WBF in consultation with a task force of mental-health professionals, social-service organizations and the local school district. Aimed at identifying gaps surrounding mental health and substance use, the results will be used “to create environments that are supportive of mental health and foster a participant-centred approach,” wrote WBF executive director Mei Madden in an email.

Conducted in August, the survey is based on responses from 314 Whistler residents aged 19 and up, and paints a picture of the community’s resilience through trying times.

In all, 77 per cent of respondents felt like they have community connections or services they can turn to in a time of need, while 83 per cent reported feeling confident or somewhat confident in their ability to manage stress and work.

Forty-one per cent of those polled suggested their emotional or mental health was “not good” for one to five days over the prior months, with a fifth of respondents noting they missed between six to 10 days of activities due to poor mental health. Another 40 per cent said they experienced a lack of companionship or felt isolated from others “some of the time,” while 19 per cent chose “often.”

Tellingly, respondents’ reported well-being was often influenced by age and socioeconomic status, with those surveyed more likely, for instance, to feel isolated “often” below the age of 50 and with an annual household income below $60,000.

More than half of respondents who did seek help for their emotional or mental-health needs reported experiencing barriers to accessing support, with the top two barriers listed as cost (45 per cent), and not knowing where to go to find resources (35 per cent).

“I think that’s an important thing for all of us to take away,” Whistler Community Services Society (WCSS) executive director Jackie Dickinson said. “It asks questions of us at WCSS and we’re having conversations [around] the financial criteria we have for people to access our [subsidized counselling] service. We’re considering looking at that financial criteria and reviewing it to see who is missing or needs support that doesn’t meet that financial criteria.”

Resort employers should also take note of the concerns around the cost of accessing support, urged Dickinson.

“From an employer’s standpoint, these results are really important to gather because, if cost is a barrier and you’re an employer that doesn’t have an [employee assistance program] with counselling attached, it is something to consider,” she said.

Whistler’s social-service provider is exploring new ways to reach the community’s younger demographic in an effort to boost awareness of the services available locally, particularly for the seasonal workforce.

“There is a constant flux and turnover in our community, so we have to remember that some people are only with us for a short period of time, and so what are we going to do to reach those people quickly and effectively, and how is that information going to get to them in a prevention-based way rather than a reactive way?” wondered Dickinson.

The results also shed light on alcohol and substance use in the community: a combined 42 per cent of respondents listed alcohol (29 per cent) and drugs (13 per cent) as part of their maintenance toolkit. Again, the results were largely dependent on age, with 35- to 49-year-olds most likely to rely on alcohol (39 per cent), followed by 50- to 64-year-olds (31 per cent). The younger demographics were more likely to resort to drugs, with 22 per cent of 19- to 24-year-olds listing them as a maintenance tool (versus 18 per cent who listed alcohol), followed by 25- to 34-year-olds (20 per cent versus 27 per cent who listed alcohol). A combined 20 per cent of those polled 35 and over listed drugs as a coping mechanism.

The WBF is now using the survey results to form a community hub that will integrate relevant information from a number of sources.

“It will essentially be a ‘one-stop shop’ for accessing mental-health resources and we hope by doing this, our community will be able to know where to turn in their time of need,” said Madden, adding that the hub is expected to be up and running in the new year.

The non-profit is also exploring the creation of a “community collaborative” support model, with input from local service providers, that is aimed at streamlining the counselling intake and referral process so  that it is “participant-centred and supports a warm handoff for those in need of a referral,” Madden explained.