Business owners report they are optimistic about the Sea to Sky corridor's future
May 14, 2014 10:00 PM By: John French 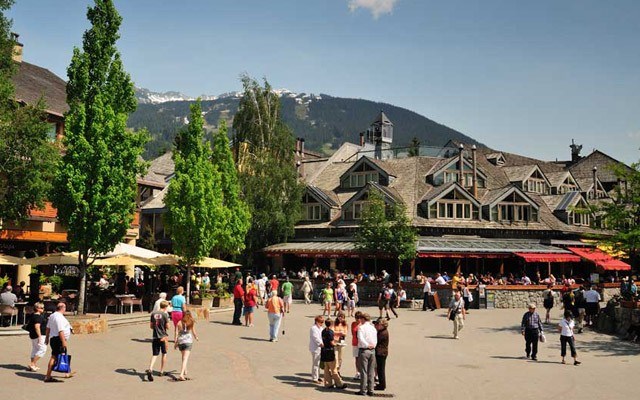 Optimism for future Sixty-four per cent of Sea to Sky business owners, including those in Whistler Village, are feeling good about the coming years. Photo by Mike Crane/Tourism Whistler

A survey of business owners in the Sea to Sky corridor has found 64 per cent of business leaders in the region are optimistic about the future.

Despite concerns about an uncertain economy, a majority of business owners said they are either optimistic or very optimistic. The survey offered "somewhat optimistic" as a choice and 27 per cent chose that response. Only six per cent said they weren't very optimistic about the future.

Duane Hepditch, the president of Guestfolio, participated in the survey. While his business is growing he said he's having difficulties attracting workers with the skills and talents Guestfolio needs.

"We've been looking for software developers and programmers for the past six to eight months," said Hepditch of his software company. "We're offering competitive salaries plus benefits, bonuses and an opportunity to move up. The jobs are here, but we can't find the right people."

He said the people with the specific software development skills he needs are going to big companies with big budgets in major centres like Seattle and Montreal.

"We're looking for more depth and experience than what's coming through," Hepditch said of the three positions he's been trying to fill.

Guestfolio employs 14 people. Two are working from the U.K. while the other dozen are based in Function Junction. Hepditch said he's now looking at possibly moving to a remote-work scenario for the positions he's having trouble filling.

The survey also found that lack of access to capital is preventing businesses from growing. Fifty four per cent of business owners who said they borrowed money, or tried to borrow money in the past six months, found the process difficult. Just 33 per cent of the respondents found the process easy.

Jeff Dawson, general manager of CFHS, said the survey is going to become an annual exercise to give CFHS an ongoing glimpse into the state of business between Squamish and Pemberton.

"Each year, we'll be able to add to that information, which will help us identify and develop programs that will help small businesses in the region," said Dawson.

The survey was conducted in March. A total of 91 small business owners participated the survey. Telephone interviews were done with 44 business leaders and 47 web-based responses were received. Of the total respondents, 55 per cent were located in Squamish, 23 per cent were in Pemberton and 20 per cent were in Whistler.