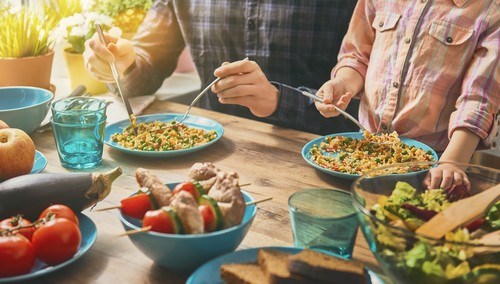 EATING AT HOME The country’s dinner time is evenly split between eating in the dining room (51 per cent) and in an area of the home equipped with a television set (49 per cent).

Over the past few months at Research Co., we have taken a look at certain habits of British Columbians when it comes to food. We learned about their views on calorie counts and website visits in restaurants, as well as how many of them are growing food in their homes. As the summer progresses, we'll be looking into other issues related to what we eat and how, starting with our dinner habits at home.

For this survey, we sought to compare British Columbia to the rest of the country on three themes related to nourishment at home: how long it takes us to cook dinner every night, how often we rely on prepared provisions we take out of the freezer, and-on a decidedly more sociological note-how often we consume what we cook in front of a television set.

There is a gender gap on speed, with more than a third of men (36 per cent) saying they make dinner in less than 30 minutes, compared to just one in four women (24 per cent). This is also an area where British Columbians appear to be less rushed than residents of other provinces.

In Manitoba and Saskatchewan, 38 per cent of residents report taking less than half an hour to prepare the average weekday dinner. Second on the list of fast cooks is Alberta (33 per cent), followed by Atlantic Canada (31 per cent) and Ontario (30 per cent). Quebec and British Columba are at the bottom of the list (26 per cent and 25 per cent respectively).

Quebecers are significantly more likely to devote a long time to dinner, with 20 per cent of the province's residents saying the average weeknight preparation usually takes more than 60 minutes. British Columbia is second on this question at 14 per cent, with no other region of Canada reaching double digits.

At a time when two-income households have become the norm across Canada, the urge to place something in the oven or microwave after a busy workday is intense. Sizable majorities of Canadians say they have had frozen entrees cooked in the oven (71 per cent) or cooked in the microwave (60 per cent) for dinner over the course of the past month.

Once again, the regional differences are clear. Frozen entrees in the oven are decidedly more sought after in Saskatchewan and Manitoba (78 per cent), Ontario (77 per cent) and Alberta (76 per cent) than in British Columbia (65 per cent), Atlantic Canada (64 per cent) and Quebec (63 per cent).

A similar situation ensues for using the microwave to prepare frozen foods for dinner at home. Once again, Saskatchewan and Manitoba (68 per cent), Ontario (65 per cent) and Alberta (64 per cent) lead the way, with Atlantic Canada (59 per cent), British Columbia (53 per cent) and Quebec (48 per cent) further back.

In our final question, respondents to the survey were asked how often they have dinner at home in each of two different scenarios: at the dining room, with no television; or at a different part of the home, with the television on.

The country's dinner time is evenly split between the dining room (51 per cent) and an area of the home equipped with a television set (49 per cent).

Quebecers, who had already established themselves as the most enthusiastic cooks and the biggest shunners of frozen entrees, are also the most likely to consume their food at the dinner table (60 per cent).

Atlantic Canadians come close to Quebec on occupying the dining room on most nights (58 per cent), but the proportion drops to 51 per cent in Ontario, 45 per cent in Manitoba and Saskatchewan, 44 per cent in Alberta and a Canada low of 42 per cent in British Columbia.

So, British Columbians continue to be enigmatic. We are closest to Quebec's gourmands when it comes to spending time in the kitchen preparing a meal. We are also more likely to avoid an overreliance on frozen foods. Yet we lead the entire country at consuming our food in front of a television set. Advertisers and broadcasters may be thrilled to find that out.

Results are based on an online study conducted from May 31 to June 3, 2019, among 1,000 adults in Canada. The data has been statistically weighted according to Canadian census figures for age, gender and region in Canada. The margin of error, which measures sample variability, is plus or minus 3.1 percentage points, 19 times out of 20.