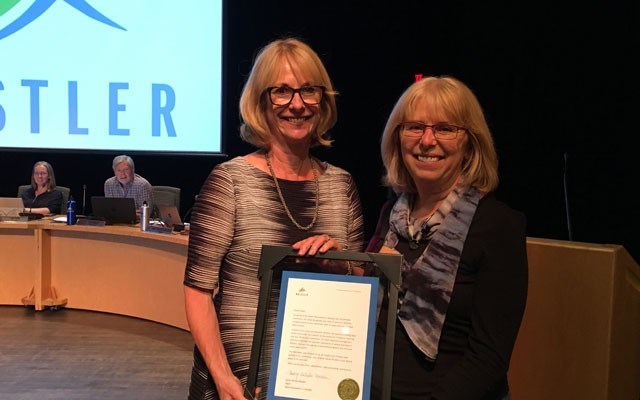 WORTHY RECOGNITION Sylvia Dolson (right) was recognized by Mayor Nancy Wilhelm-Morden for her years of service advocating for Whistler's bears at the Sept. 19 council meeting. Photo by Braden Dupuis

When Sylvia Dolson left Ontario with her husband 23 years ago, Whistler — and advocating for the bears that call it home — wasn't really on her radar.

"We actually travelled for two years in a motor home, and we decided we weren't going to go back to Ontario. I wanted to move west, and somehow we ended up in Whistler at the KOA, the old campground," Dolson recalled.

"The first day that I went to go grab a newspaper the front page story was 'Garbage bear destroyed in village,' and I thought, 'wow, really? You kill bears for eating garbage? Like what is that all about?'"

Dolson called a woman who was interviewed for the article, who invited her to attend a meeting.

"I went to that first meeting, that first week I was here, and I've been doing it ever since," she said.

For 21 years, Dolson has provided a voice for Whistler's bears through the Get Bear Smart Society.

On Oct. 10, she'll leave Whistler for a change of pace on the Sunshine Coast.

The Get Bear Smart Society will continue to exist, though no one is lined up to be its new executive director just yet.

"I would love to see someone continue to advocate on behalf of bears, because I feel like that's the role that's going to be missing (on the Whistler Bear Advisory Committee)," she said.

There are a lot of things in place in terms of day-to-day education, the new solid waste bylaw and the Resort Municipality of Whistler's (RMOW) bear management plan, Dolson added.

"We have it all lined up, but the only person not sitting at the table anymore is that person representing the bears, and I really feel like that's a critical role, to help inspire the group in a direction that supports bears," she said.

"All the organizations have their own mandate, but the bears need to be sitting at the table, and they can't. They need a voice."

Asked if there were any specific highlights or big wins during her time as a bear advocate, Dolson pointed to the cumulative impact and collaborative effort of all involved — from the RMOW and Carney's Waste to the RCMP and Conservation Officer Service.

"As much as sometimes we've had our differences — because I know I've been a pain in the butt to them many times, trying to do what's right for the bears... they've all stepped up to the plate more than any other community I know," she said.

"I really, really think Whistler has been a leader in creating a bear smart community."

At the Sept. 19 council meeting, Dolson was recognized by the RMOW for her years of service.

"She's been just such a tremendous addition to our community, particularly with her work with bears," Mayor Nancy Wilhelm-Morden said before the meeting.

"We're very sad to hear she's leaving our community, so we thought we really did need to recognize her dedication and her efforts over the years."

It's likely Dolson will continue her bear advocacy on the Sunshine Coast, but she suggested anyone interested in taking up the local mantle reach out to info@bearsmart.com or the RMOW.

"It's really weird how your life can change, you know? Because I actually graduated from business school, I don't have a degree in biology or anything, so it really wasn't something I'd been planning for as a career, but I've always loved teaching and I've always loved animals," she said.