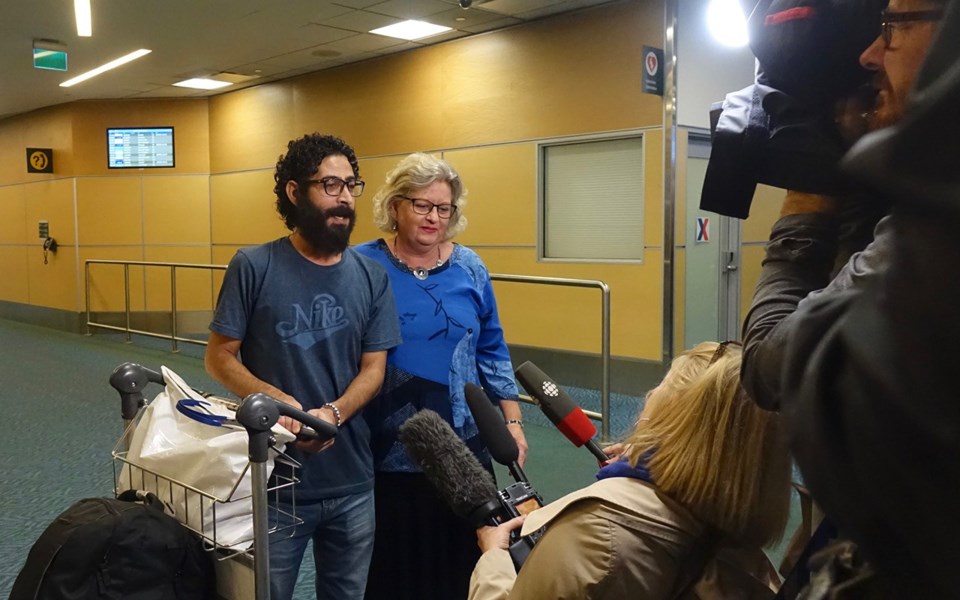 Happy Ending Hassan Al Kontar and Laurie Cooper found themselves at the centre of an international media storm after the Syrian refugee secured his release from a Malaysian detention centre this week. PHOTo by jen grover

Whistlerite Laurie Cooper made a promise to Hassan Al Kontar when she began the push to bring the Syrian refugee to Canada after he was left stranded in a Malaysian airport.

"I am an eternal optimist and I'm pretty determined, so I always figured we would find a way to get him to safety. That was my commitment to him. I never said to him, 'I will definitely get you to Canada.' What I did say was that 'I will not stop until I help you find a place to live,'" Cooper recalled.

Thanks to her efforts, along with the help of the BC Muslim Association and one of Canada's preeminent refugee lawyers, Al Kontar arrived in Whistler Tuesday, Nov. 27 after a lengthy ordeal that saw him spend seven months in the terminal of a Kuala Lumpur airport, followed by two isolating months in a Malaysian detention centre.

But at least on this rainy winter day, Al Kontar had reason to smile. In between a rush of media appearances—Al Kontar said the pair did 13 interviews on Tuesday alone and turned down dozens more—the native of Dama, Syria was just settling into his new home.

"Yesterday we have a quick chance to get outside for a haircut and a cup of coffee," Al Kontar said when reached by phone Wednesday morning. "You realize there is a rare moment in your life where (the reality) becomes more beautiful, charming, amazing than the dream itself."

When Al Kontar wanted a fresh look after his hair had grown shaggy in detention, Cooper posted to social media, and The Whistler Barbershop stepped up with a free cut and clothes. When Al Kontar was in Cranked Espresso Bar for an interview with the CBC, the staff not only offered him free coffee, but a job. He's also become somewhat of a minor celebrity in town.

"We were walking down just outside the Independent, and this woman goes, 'Oh my god, you're Hassan! I've read about you in the Pique!'" Cooper said.

For the first time in years, Al Kontar's future looks bright. The 36-year-old's international odyssey began in 2011, when the insurance marketing manager lost his work permit from the United Arab Emirates after civil war broke out in his native Syria. It left him scrambling to find a country that would issue him a visa so he would not have to return to his war-torn homeland. For years, he slept in his car or hid out in parks.

In March, he was turned away from a Turkish Airlines flight, causing his three-month Malaysian work permit to expire and leaving him stranded in the Kuala Lumpur International Airport.

The affable Al Kontar documented his plight with a healthy dose of humour and pathos on his Twitter account, amassing thousands of followers along the way. But his social media went silent on Oct. 1, the day he was arrested by Malaysian authorities and thrown in a detention centre, where Al Kontar said he was threatened with deportation daily.

Wanted for mandatory military duty, Al Kontar, who is a member of the Druze religious minority that has been persecuted by extremists and who has also been critical of President Bashar Al Assad's autocratic regime, feared for his fate if he were sent back to Syria.

When Cooper, the founder of Canada Caring, a non-profit dedicated to placing volunteers in refugee camps, learned of Al Kontar's ordeal, she was driven to action, launching a letter-writing and fundraising campaign with a group of fellow Whistlerites. Eventually, the BC Muslim Association reached out, offering a sponsorship spot to bring Al Kontar to Canada. Andrew Brouwer, Legal Aid Ontario's senior counsel in refugee law, offered his services pro bono and wrote letters to human-rights organizations around the globe.

Cooper was unsure of exactly how Canadian officials managed to secure Al Kontar's release, other than staff at the Canadian High Commission in Singapore got involved.

A retired journalist and communications specialist, Cooper could never have imagined she would find herself in the middle of an international, geopolitical crisis.

"I feel like I'm in an episode of Homeland," she said. "It's stunning to me. It's nothing I ever envisioned being involved in."

Al Kontar arrives in Canada as a permanent resident, and has been offered a job at a Whistler hotel. For now, he will stay with Cooper at her home in Emerald, where he will take some much-needed R&R.

He admits that he and his family could never repay Cooper for what she's done.

"I can't pay her back, except that I will try not to let her down and try to prove to her that the minute she decided to help me she was doing the right decision, and I'm a good example why all other countries—or individuals—should do the same thing," Al Kontar reflected. "Always, she will have a special place in my heart. People, in general, describe hope with words. But for me it has both words and (an image). There's the word hope and there's the (image) of Laurie Cooper."