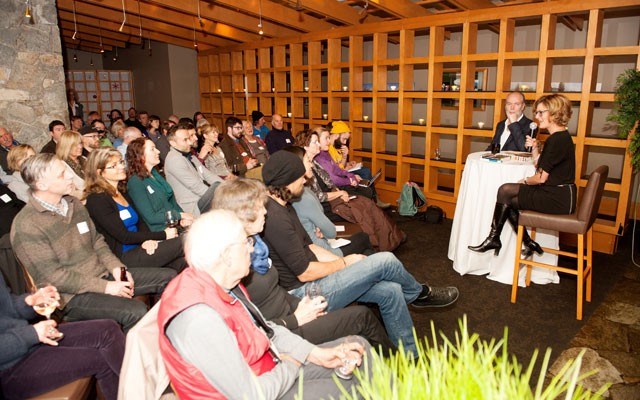 When it comes to award-winning novelist, artist and futurist Douglas Coupland, you'd be challenged to find a more prolific and eclectic force in Canadian contemporary culture.

So it stands to reason that a recent talk between Coupland and longtime friend and federal Liberal nominee for the West Vancouver-Sunshine Coast-Sea to Sky Country, Pam Goldsmith-Jones, would be a far-reaching affair.

Goldsmith-Jones was hosting the second of three Liberal Party community roundtables throughout the riding last Wednesday, Jan. 7, at Nicklaus North, called Democracy Talks. The theme of the night centred around the cultural economy, but the discussion expanded to cover a wide range of topics, including education and political engagement among youth.

Coupland and Goldsmith-Jones grew up together in West Vancouver and both graduated high school in 1979. Each had their own perspectives on what makes Whistler one of the most vibrant and livable communities in the country.

"I think what you have in Whistler is a critical mass of unique, non-globalized things," Coupland said, recalling how much the resort has changed since he first visited as a child with his family when the only place to go on a bad weather day was the Husky, he said.

"That's quite an achievement for a place that had virtually nothing 20 years ago," he added.

Goldsmith-Jones also commented on the remarkable transformation the resort has undergone — and all at breakneck speed, particularly since the high-water mark of the 2010 Olympic Games.

"Thinking about the last four years, it's remarkable the impact of the Olympics here and the potential that's coming at us with the (Audain Museum) gallery, and also with the (Squamish Lil'wat) Cultural Centre and the opportunity for synergy there," she said.

As Goldsmith-Jones put it, Coupland could be described as "a cultural economy" in his own right, and he was asked how to best support a grassroots creative class working to sustain itself in Whistler.

"If you have any surplus space whatsoever, if you can get some sort of tax breaks for artists, because you have to have a physical space to live. It's not just all 'laptop at Starbucks,' you have to have a reasonably reliable place (to work)," he said. "Then once anyone's in a place, they will integrate into the community, but they have to feel like they're not going to get booted out at any second."

Providing available space to artists is a suggestion that's already been put to paper in Whistler's Community Cultural Plan, and Chamber of Commerce CEO Val Litwin spoke to those efforts Wednesday.

"One of the things I know we're looking at is how do we support some of those local artists, whether it be bringing them into the (town) core, whether it be directing our cultural tourists out into the periphery, into the neighbourhoods, where maybe they can't afford that commercial space in the core of the village proper?" he asked. "How do we get them out to those places?"

Politics, naturally, were also on the agenda at Nick North; with one audience member asking how to effectively reach a younger demographic that is not heading to the polls in significant numbers. Coupland argued that, in our current digital age, Canadian youth are in fact more engaged with the political process than ever before, and suggested online voting as a means to increase turnout. This political savvy, however, will not carry into future generations if the government keeps cutting funding for education, he added.

"How hard is it to spend an extra $100 on taxes a year to make a future you want to be a part of?" a frustrated Coupland asked.

Goldsmith-Jones surmised the real issue is youth's lack of confidence in our society's institutions, and that in order to bring our country's youth into the fold, government needs to "take our young people seriously."