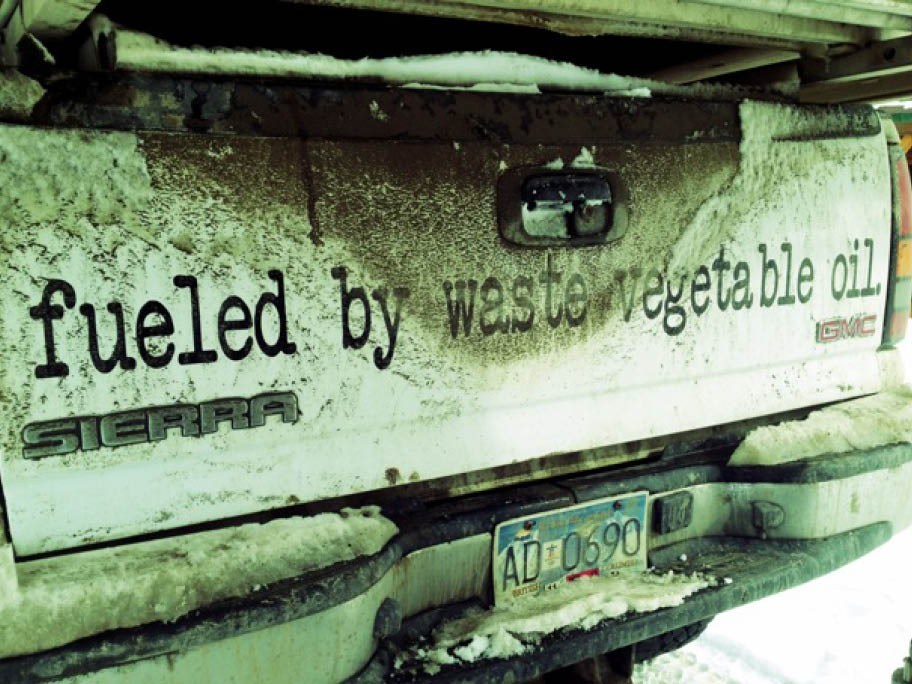 The aroma of greasy French fries is thick in the air. But no, I am not in a fast food joint, I am leaning on the side of an idling Toyota Hilux, running quietly on waste vegetable oil (WVO). The only telltale sign this vehicle is different — aside from the smell of fries, which makes my stomach growl — is a 60-litre tank installed on the bed of the pick-up truck. Standing beside me Squamish resident Scott Kerr, owner of Pacific Biofuel Supplies, reveals why he believes the Sea to Sky Corridor is leading the charge in this alternative fuel industry.

Kerr's journey down the WVO path began a few years ago when he moved to Squamish and launched a conversion business, Switchover, with his friend, Geoff Hill. Having set up the UBC biodiesel program more than 10 years ago, Hill brought that experience to the table, yet as Kerr confesses, neither of them were mechanics, which posed a bit of a challenge, notably with newer vehicles. And so in March this year the business was sold to a mechanic, Shayne Rogers — a move which Kerr describes as a win-win for everyone — while he branched out into the supply side of things, building and selling parts for conversions.

The concept of running vehicles on vegetable oil is certainly not a new one — in fact, it's been around since the early days of the diesel engine. At the Paris exhibition in 1900 an engine built by Rudolf Diesel was running smoothly on peanut oil, yet as petroleum fuel became more available, it quickly developed into the fuel of choice.

But today, as the price of gas increases and the effects of climate change are better understood, vegetable oil is once again becoming an attractive option for some folk.

And it's a relatively simple change for good, notes Kerr.

"The thing that I think is good about waste vegetable oil is that it's something you can do right now without dramatically changing your life," he says.

Running your vehicle on WVO

Step one in WVO conversion: you need a diesel vehicle. Size is not a factor — in fact, Switchover has been converting vehicles ranging from VWs to school buses and is currently looking at converting a semi-trailer truck.

The conversion process takes roughly two to three days to complete and will cost anywhere from $1,300 to $3,000, says Kerr, adding that the return on investment is between six and eighteen months.

The converted vehicle starts by running on diesel and switches over to vegetable oil once it warms up to temperature, and when finished, the engine is purged of vegetable oil to ensure it is ready to start on diesel the next time. This switchover can either be controlled by a manual toggle switch, or via an automated system, with automatic temperature switches and a turbo timer to keep the car idling long enough to flush out the vegetable oil after you've pulled your key out, locked the door and walked away.

"We try to make the waste vegetable oil tank the same size as the diesel tank on the vehicle," explains Kerr, "because you get the same mileage with WVO as you do with diesel." The tank gets bolted on the undercarriage, like a regular tank, or fitted into the trunk, or installed on the bed of a pick-up.

Kerr estimates they've done more than 40 conversions since Switchover started, and at a guess, 10 of those conversions were for people living between Lions Bay and Pemberton. Yet despite his company's growing success, Kerr says he is concerned about negative comments on online forums.

"Because this is a niche community and widespread, a lot of the communication happens in forums," he said, "and a lot of people who have a vehicle converted have a vehicle that's 20 years old. When something goes wrong with their car, they blame it on the vegetable oil system and broadcast that far and wide. And sometimes it's nothing to do with the fuel system; sometimes it's clearly not related to vegetable oil at all," he said, noting that part of the problem is that these forums are more accessible than the scholarly research, which is out there as well.

He points out another challenge facing the burgeoning industry, from an operator's point of view, is access to clean oil.

This is where Will Edmondson steps in. The owner of Transphat, which supplies motorists with a source of clean WVO, Edmondson describes it as a "shits and giggles" business to date, but admits demand is growing as people realize that using WVO is a viable way of fuelling their diesel vehicles.

"My purpose in the whole chain of events is to try to make it a little more accessible to people," he says. "I have people living in condos who come and grab fuel for the week and keep it in their closets."

Edmondson says he's developed a positive relationship with restaurants in the corridor, collecting the WVO, then cleaning it and selling it to his customers.

He laughs when he says the job of cleaning the oil, to make it suitable to run in WVO vehicles, could easily be on the TV show, The World's Dirtiest Jobs, but it's a job he doesn't mind doing.

And while many are attracted to the cost savings — WVO is half the price of diesel — Edmondson says people also like using a local supply of fuel instead of outsourcing it. "I love driving past gas stations," Edmondson says. "I've probably put in over 100,000 kilometres in my vehicle on veg oil, so it definitely made my fuel costs lower."

And once converted, there are no limitations on how far you can drive your WVO vehicle.

A professional freeskier from Squamish, Abma recently returned from an 8,500-kilometre trip to Alaska using his converted truck. And rather than collecting oil along the way, he towed a trailer holding a vegetable oil tank.

"It's really an amazing feeling driving around on veggie oil ... it puts a smile on my face every time it switches over from diesel to veggie oil," Abma said.

More and more corridor restaurants are jumping on the bandwagon and donating their waste oil to the cause.

Les Ecker, owner of the Southside Diner in Whistler, has been stockpiling waste oil in containers, which Edmondson then collects, for the past two years — a process which he describes as "painless."

He has also been running his van on WVO and points out that since it is considered a waste product, which requires restaurant owners to pay for its removal by recycling companies, he prefers to put the waste oil to good use.

"It's something that I have to get rid of from the restaurant ... so I'm using it twice in this sense," Ecker said.

He also cites rising fuel prices as part of his reasoning to convert, along with the desire for a smaller carbon footprint, and notes that it's a great conversation piece as well. "The most common question asked is, 'How does it run when compared to running on diesel?' and it's the same — same power, same performance."

Ecker notes that the WVO industry is growing but describes it as a "kind of underground type of thing at the moment."

There are challenges. If consumption becomes larger than hobby use, people may be forced to pay a fuel surcharge tax, and the whole industry could be shut down.

There are even some companies, which collect WVO, take it to Vancouver, process it and ship it overseas because there are too many rules and regulations in Canada.

Kerr believes that Canada is lagging behind other parts of the world in this alternative fuel technology.

"Europe has all kinds of government-funded research on waste veggie oil to try to increase the technology and promote its use, and Canada doesn't really have anything like that," he says.

"It's getting more recognized that this is a good way to run an engine, but it's still kind of backwoods here in Canada — people still look at you funny when they hear about it."

Meanwhile, a lot of people ask about sustainability and Kerr agrees it's not sustainable to use our agricultural land to grow fuel for our vehicles.

But while he acknowledges there is only "X" amount of WVO in the world, he maintains there's a lot we're not using.

"It fills a niche — it's a stop-gap measure while we figure out what's actually going to work in the long run."