Threats of pay cuts push teachers into rotating strikes around the province next week
May 22, 2014 10:02 PM By: John French 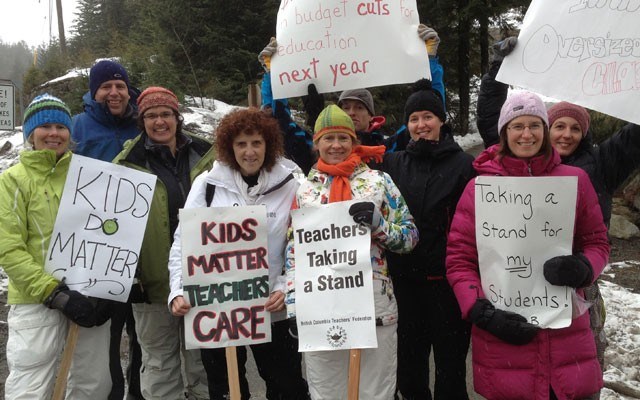 Sea to Sky schools will be behind picket lines Monday, May 26.

Teachers will be off the job that day as part of rotating-strike action by the members of the BC Teachers' Federation (BCTF).

The superintendent of schools in the district, which serves students in from Blackwater Creek Elementary south to Whistler and into Squamish, said schools will be closed on Monday and parents should make supervision plans for their children. Lisa McCullough noted in a letter to parents that CUPE workers have indicated they won't cross the picket lines.

There won't be any bus services that day and support workers won't be reporting to work. This means only principals and vice principals will be at each school, so supervision at schools will be limited.

"If a student were to show up at a school, students will be welcomed into the building," said McCullough. "We have extremely limited supervision, so if hundreds of students show up that would be very problematic."

Carl Walker, president of the Sea to Sky Teachers Association, said the job action being planned by teachers is part of the BCTF effort to negotiate a settlement between the teachers and the BC Public School Employers' Association (BCPSEA).

"We hope for a negotiated settlement, but we understand why we have to take this action," said Walker. "We have significant challenges with respect to class size, class composition — all of those issues that we've been pushing the last couple of years.

"For now it's just week-to-week. My understanding is that the BCTF is bargaining later this week. We still hope we can reach a settlement at the table."

He noted, the Labour Relations Board sanctioned the job action, and any student who does attend school on Monday will be crossing a picket line.

The BCTF is launching single-day walkouts around the province every day next week, except Friday, to protest what the BCTF describes as unwillingness on the part of the provincial government and the BCPSEA to offer any improvements to class size and class composition in recent negotiations. The teachers also describe the province's most recent wage demands as unfair.

"Last week, teachers were hopeful when they saw the government and BCPSEA put out an olive branch by backing off the unrealistic 10-year term," said BC Teachers' Federation President Jim Iker through a news release. "The next day, hope that this government would start negotiating in good faith faded when the employer announced a series of threats around wage rollbacks, lockouts, and attempts to divide teachers, parents, and students."

Education minister Peter Fassbender offered teachers a time-limited signing bonus late last week. News reports that followed indicated the bonus amounted to $1,200 per teacher if a six-year deal was reached by the end of June. But the province also threatened to cut teachers' pay by five per cent if a deal wasn't reached before the end of this school year.

"There is a clear pattern for public-sector settlements, and BCPSEA has already tabled a fair offer that reflects these agreements," said Fassbender.

In a letter sent to parents by McCullough, she said updates on the labour situation and its impacts on students will be posted to the school district's website http://sd48seatosky.org.

Meantime, three personnel changes were announced by McCullough last week. The Pemberton Secondary principal as of Aug. 1 will be Ryan Massey, who is currently the principal of the Sea to Sky Learning Connection. Don Ross Secondary will have a new vice principal with Brayden Gordon joining Sea to Sky from the West Vancouver School District. And, Leslie Drinovz has taken on the vice principal role at Signal Hill Elementary on a temporary basis.