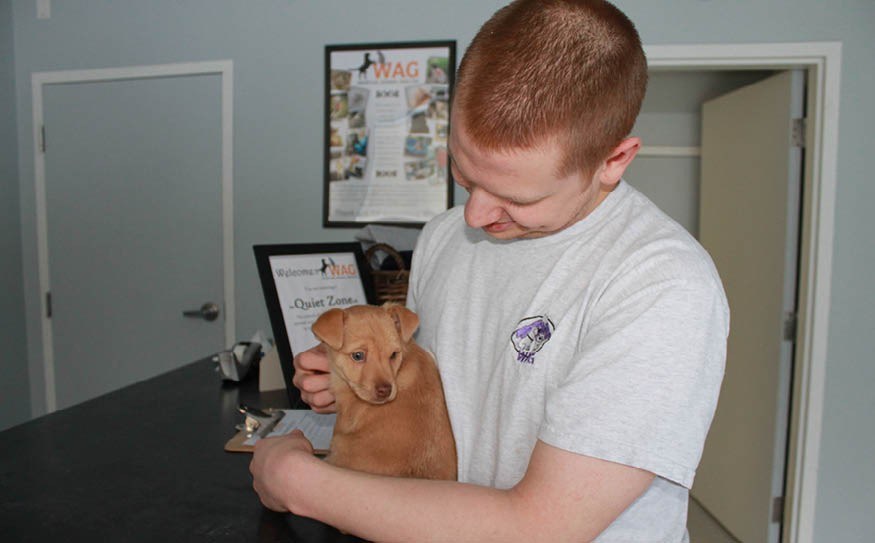 WAG is in the fourth week of a six-week pilot project aimed at students in Grades 8 and 9 from Whistler Secondary School to see how teens fit into their programming as helpers. The volunteers spend two hours per week over a six-week period at the shelter.

Shannon Broderick, WAG's director of shelter operations, said this was the first time they had tried it.

"I find with kids at that age, it's always a struggle to get that first job with no experience at all, so it's an opportunity for them to gain a little experience, have a reference," Broderick said.

"They do an orientation and then come in and are assigned a list of chores, then they have time with the animals and can interact with them, and then they have a project — they either have a fundraising project or an advocacy campaign."

Graduates will receive a certificate of completion and a letter of recommendation for their resumes. While the program is not currently connected with the school, Broderick said they would be open to some kind of work experience arrangement.

"The idea, when we sat down and started talking about it, was that the kids finish the program knowing the whole scope of animal sheltering, understanding it's not just about coming in and playing with puppies. It is chores, it's cleaning and there is the fundraising and advocacy component," Broderick said.

Two Whistler Secondary School students are currently taking part in the pilot project. Broderick said they will soon open a list for other students and will be charging participants $25 to cover some of their costs. Only two or three students will be taken on at a time.

"It's no different than a job. We're giving them the skills needed to go out there in the world. They do things like laundry, clean the floors, wash the windows and things like that," Broderick said. "We gave them a list of project ideas, things to choose from, anything from creating an adoption poster to writing a letter to local government on why protecting animals is important."

Thirteen-year-old Colin Faiella, a Grade 8 student at Whistler Secondary School, waters the plants, cleans the window and washes the cat tree. He also makes peanut butter treats for the animals.

"I do my tasks and then do a load of laundry if there is any," he said.

His project is an adoption poster for "a really nice, but really shy" dog named Beaver.

"I decided to work here because I wanted to visit with animals. I have a dog of my own and he gets really lonely so I wanted to see if there was a dog here we could get him. I also really wanted to hang with the animals," Faiella said.

"It's fun. The best bit is at the end when I get to visit with the animals."

Dylan Jones, who is overseeing the project for WAG, said it has been interesting to see what different skill sets and abilities the teens bring to the job.

"I definitely think they are learning a lot. We definitely get a lot out of it, they do very important tasks every day and their projects are interesting," he said.

Broderick added that they were keeping an eye on future involvement by the students.

"I'm looking forward to the day when those kids come back. Once they've been through the program they are welcome to come back a volunteer... we just want the kids to know that there is more to animal sheltering and animal welfare than playing with puppies," she said.