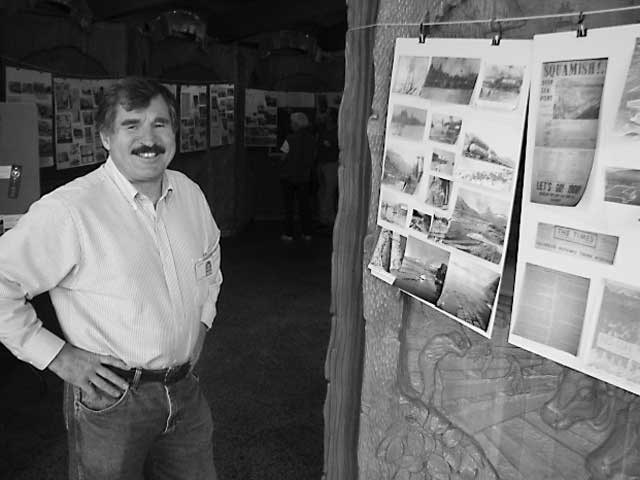 Helmut Manzl has his opinions, occasionally controversial little nuggets that wander out from beneath his moustache and rise to the ceiling above, not quite a head of steam, but no ethereal fog, either.

Mind you, he’s a local newspaper columnist in Squamish, historical filmmaker and retired history teacher from Ontario. You don’t develop that kind of tenure and remain agreeable. And history is one of those things: The more of it you learn, the more inclined you are to comment on the present and future. The first, after all, begets the other two.

“Visualize this,” says Manzl, who makes his way through this damp morning in a red coat and blue shirt with button-down collar, his shaggy hair like a leaf blown across his forehead. “Visualize a gondola that goes up to one of these mountains in the Tantalus Range. There’s a restaurant up there, a beautiful restaurant and paths that radiate outwards from it. And now visualize all the Greyhound busses parked at the bottom.”

And, for that matter, visualize Garibaldi at Squamish, though only once the environmental concerns are addressed. And visualize Brackendale as not just a place to watch eagles, but as a place with an eagle hospital to boot, the sort of facility with volunteer courses and learning modules.

His introduction to filmmaking was haphazard. Arriving in Squamish about eight years ago, Manzl joined the historical society. Around the time he decided to liberate old photos from the dusty confines of forgotten library shelves, he bought a computer that just happened to have basic film-editing software on it. And the rest was a post-retirement reincarnation.

At the moment, Manzl is working on a documentary about the Squamish Nation. His third film, it’s slated for a February release, with a premiere in Totem Hall and a regular run at the Adventure Centre.

“It’s got three parts,” he says, “past, present and future. It looks at the life and times of First Nations communities, some of their earliest history. There are quite a few folks who have lived here for the past 50 or 60 years and seen quite a bit of change.”

For Manzl, change is the future of Squamish, just as change is what defined its past. There’s no stagnation here, none at all.

His first film, Brackendale Then and Now , screened recently at the Brackendale Art Gallery. About an hour long, it trundles through the so-called republic’s earliest days, when Henry and Annie Judd entered the last decade of the 19 th century with their newly plowed lot, thus clearing the way for the eagle mecca of today. The film partially relies on old pictures to tell the story, and the still life approach is rounded out by a series of interviews with Squamish old-timers.

When Manzl introduced the film, he did so with one of those desert island questions. You know the type, and you can probably guess at his company: The Judds.

“The reason is that they have to be two of the most resourceful people I’ve ever encountered,” he says.

At the same time, Squamish history is full of resourceful people. So it goes when you try to scrape out a living in geography this wild and wicked. Manzl’s second film, The West Coast Logging Life , delves into the town’s most crucial cornerstone: Logging. From the days of oxen to those of the industrial revolution, and, now, to the mostly dormant era of a once mighty industry, Logging explores much of what brought Squamish to its current crossroads.

“Logging is still an industry in this town,” says Manzl. “It’s not a major one, but it’s still around. But this town is in transition, and it’s in transition from forestry-based to something based on tourism and the service industry.”

And so you can see what informs those ideas about gondolas and all-seasons resorts.

“There are a lot of people who say you shouldn’t do it, leave it natural,” he says. “That would be fine if we weren’t in such dire straits for jobs, if we were still in the days of Woodfibre.”

Now consider this: Manzl is Austrian, has kicked around a number of one-industry towns stuck in the doldrums. According to his experience, those places just get on with it, just throw open the doors and invite the world.

“You’ve got an old guard here,” he says. “I run into it all the time. E-mails unanswered. Calls unanswered. Stores that say they’ll open at 10 a.m., but don’t. Part of that mentality is they really don’t want too much change.”

And yet, change comes whether wanted or not. There’s no dam for progress, what with the degree of global integration we’ve reached. The question isn’t whether or not change is desirable. Rather, the question — and the crapshoot — is who will direct change.

“It’s the young people,” says Manzl. “The people like Harry and Annie Judd, who were young when they got here, are going to be the change agents. The group of young people in their 20s, 30s and 40s come through and see the potential — and they’ll steer this town through transition.”