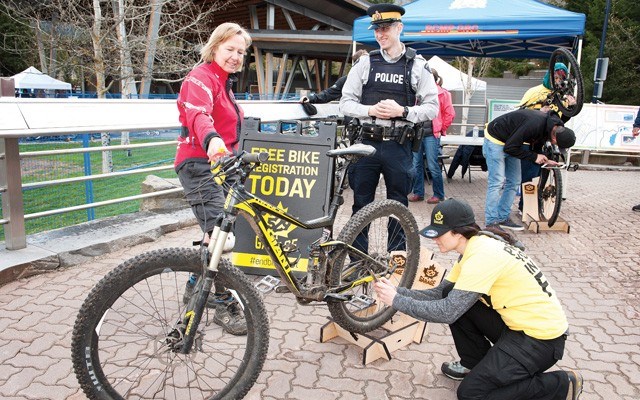 bike app RCMP officers will be on-hand at events throughout the summer getting Whistlerites signed up to 529 Garage, a community-based bike registry and recovery service. photo by david buzzard / www.media-centre.ca

An app created by a former Microsoft executive is making it easier for police to track down and recover stolen bikes.

Several years ago, J Allard (born James), Microsoft's former Chief Experience Officer and an avid mountain biker, was gearing up for a trip to Whistler for Crankworx when his custom bike was taken from a secure parking garage at the Seattle high-rise he was living in at the time.

With his vacation "ruined," Allard had some time on his hands and sprang into action. He posted dozens of flyers around town and galvanized his extensive network of friends and cycling enthusiasts to keep an eye out for his missing bike. It worked; within six weeks, he had it back.

"I was a snowflake among my friends in that I actually got my bike back, but the reason I did was through social media," Allard said.

The experience showed Allard the power of community, and, in 2014, with his unique tech skills and thousands of his own money funding the project, he launched 529 Garage, a bike registration and recovery service that uses the latest software to get bikes out of thieves' hands.

Now, the Whistler RCMP has partnered with the developer to spread the word and register as many local bike owners to the app as they can in a town that saw more than $400,000 in estimated bike theft last year.

"The system is far superior to what we use in our basic police databank," he said. "It has much better search (functionality), you can include pictures of your bike, serial numbers, and you can actually email information to police if your bike gets stolen.

"It's an awesome tool for us."

A common challenge police face is that the public often doesn't record the serial number of their bike, giving officers only a physical description — which, typically, is not enough to warrant a charge — when a bike is stolen. With 529 Garage, users upload photos and a detailed description of their bike and can search the database by make and model after a theft occurs. They can also send out alerts to other members within a 15-kilometre radius notifying them of a theft.

What's more is the app is available in the U.S., where thieves often take expensive bikes after carting them from Whistler.

"Often people haul bikes over the border and our computer systems don't match up (with those used by U.S. police forces)," Langtry said. "Bikes from Whistler have showed up on Craigslist in California, but the police down there don't have our computer system so they would never know it was stolen."

Members of the detachment have been signing bike owners up to the app and personally installing "shields," a sticker that includes a personalized seven-digit code that police can use to identify bikes with a precise level of detail.

"It's like calling in a license plate," Allard noted.

Allard said 529 Garage has now registered half a million bikes across North America, including 40,000 in B.C. He's also working with bike shops in the region to get users registered to the app at the time of purchase.