The boys are back for winter

Whistler Boys Weekend brings together group of friends who've been visiting the resort for 35 years
Jan 14, 2015 5:00 PM By: Brandon Barrett 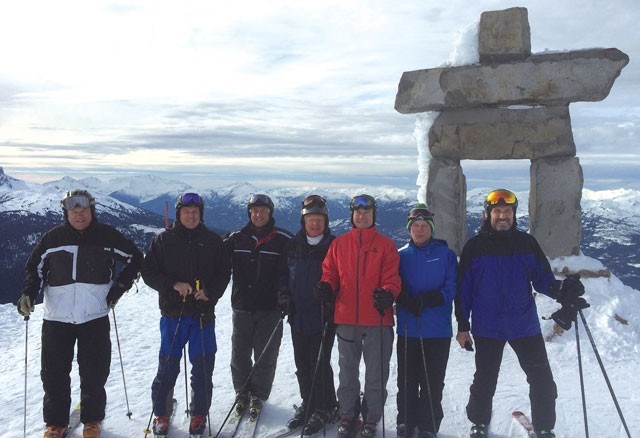 In the land of perpetual youth that is Whistler, there is probably one group of longtime friends and avid skiers who embody the commitment to stay young at heart more than any other.

They are a group scattered across North America who rarely see each other except when they reconvene once a year — something they've done for the past three and a half decades — on the slopes of Whistler. And while they've taken different paths in life and live as far away as Florida and Southern California, their common bond always seems to bring them back together.

Seattleite Nigel Jones is undoubtedly the architect and host of this mountain boys club, putting up the group — many of whom he met while on ski patrol at Sun Valley in the mid-'60s — at his expansive cabin in Whistler Cay.

"It's my 60th year skiing," he says, sounding almost surprised.

Some may recognize Jones as the man gracing the cover of the very first issue of Powder Magazine over 40 years ago, or maybe as one of the U.S.'s top 10 recreational skiers in a 1971 Sports Illustrated feature. Now, at the tender age of 70, his passion for the sport hasn't dampened a bit, and it seems to have even rubbed off on his fellow ski buddies.

"If it wasn't for this group, I would've quit skiing five years ago," said 73-year-old Tom Fitzmaurice, who hasn't lost a step on the hill as he inches closer to the three-quarter century mark.

"I set the pace yesterday," he beamed. "Every year I come up here and I'm just whining, my legs are killing me and the next day I think I have polio, but this year I've been walking and climbing up trails... I just rocked it."

The boys have had a unique glimpse into Whistler's development over the years, with an annual snapshot of the resort as it moved closer to the modern-mountain haven it is today. And as much as they enjoyed the Whistler of old — Fitzmaurice particularly appreciated the original Umberto's with its live music and abundance of single women — they all agreed the change the resort has undergone has ultimately been for the better.

"It's a first-class development," said Gregg Herrell, 70. "Everything they've done has been right and they haven't skimped on anything. The infrastructure here is second to none."

Even Jones, who still skies 45 days a year at some of the top resorts in North America, had his reservations about where Whistler was headed way back when, but suffice it to say, his opinion has since been swayed.

"I remember when they built Marketplace thinking, 'My God, this is never gonna fly,'" he said. "Now you go there on any given day and you can't find a parking spot. There was some really good planning."

At 60, Richmond resident Duncan Innes is the young pup of the group, and said he's motivated to keep coming back on the Whistler Boys Weekend simply because of the youthful energy of the group.

"They're a great inspiration," he said. "They're great skiers, they're a lot of fun and the energy they got, I mean look at them. So I actually enjoy them more now than I used to."

So is there a lesson to be learned from a group of skiing septuagenarians who've refused to act their age and remain steadfast in their quest to follow their passions into their golden years? Herrell thinks so.

"The key to it is it's all mental. You just have to have the confidence that you're going to do it," he said. "When people say, 'God, why are you doing this at 70 years old?' I say, 'Why not?' It just seems natural to me."