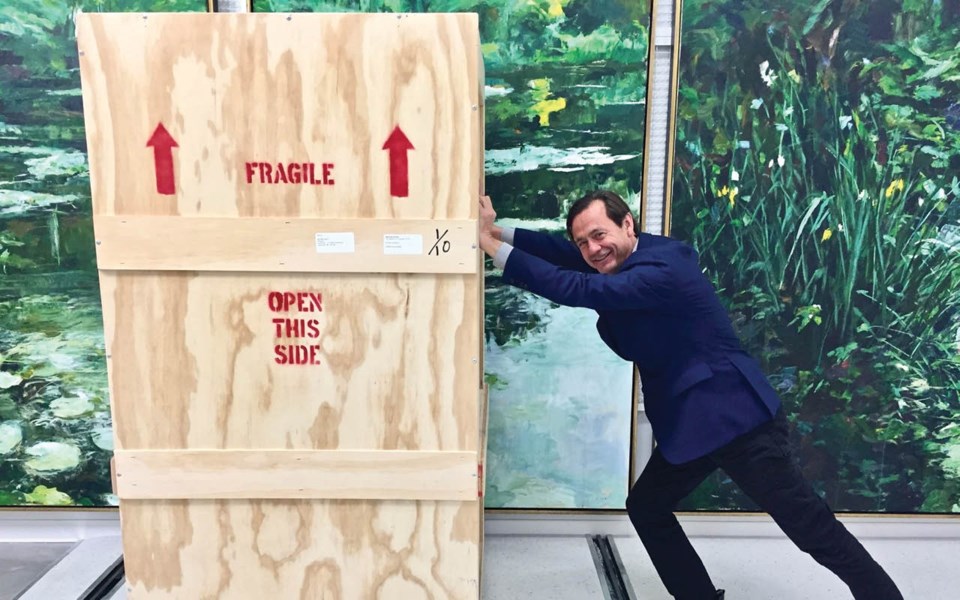 Hi there Curtis Collins, director and head curator at the Audain Art Museum, has worked in galleries, museums and art schools in nine of Canada's 13 provinces and territories. PHOTO by Leslie Anthony

As corner offices go, Curtis Collins' is outrageous. Geometric, high-ceilinged, with massive, canted windows, the ultra-modern space should be set in a gleaming tower of a futuristic metropolis, with Minority Report-type displays popping from the ether to be swept aside as Collins strolls the room. Instead, the windows lean over the earthier foliage of Whistler Village, his new home.

Collins is director and head curator of the Audain Art Museum. With a doctorate in Art History and Communication Studies, as well as administrative oversight of galleries, museums and art schools in nine of Canada's 13 provinces and territories, he brings a wealth of experience from the hinterlands—quite a journey for a guy from Cornwall, Ont., who never set foot in an art gallery until he was 18. And he's enthralled here—with both museum and town.

"The Audain would be a marquee attraction in any big city, but it's in Whistler," said Collins, echoing the incredulity of many. "So I'm excited to fulfill its mandates as well as create pride in it among Whistlerites."

We'd landed at his office after a tour that started as Collins starts his day—in the loading dock entryway where he parks his bike. Spotless and white, the area befits the museum's celebrated minimalist architecture; even its bowels were antiseptic. The dock level sits a full storey below the main building, a design feature necessary to locate it on the floodplain of Fitzsimmons Creek. We climbed tight stairs to a narrow, behind-the-scenes hallway where we spilled through a blank white door into the Audain's permanent collection galleries.

"I walk through here every morning," said Collins, with a trademark mischievous grin. "People working in galleries and museums shouldn't lose touch with the reason their institution exists. There's so much focus on financing and marketing that these can become business ventures instead of cultural ventures."

It was Monday, so later he'd have his weekly conference call with Michael Audain and the board chairman. A typical agenda ticked through administrative items before getting to "the sweet stuff"—collections and curatorial. If they strayed too far in their deliberations, Audain, who still actively collects on the museum's behalf, would usually turn the subject back to art.

Collins, known for his avant garde approach, enjoys this weekly tête-a-tête, as well as Audain's vision and forthrightness. "We were having dinner one time and just talking, and Michael said, 'You must have the record for working in the most galleries across Canada.'"

The statement posed a mute question of intrigue. Reflecting, Collins answered that working across the country had been important to his continued focus on art in Canada. "Everywhere I've lived—the Yukon, Prairies, Ontario, Quebec, Maritimes—helped me better understand cultural production in this country," he said.

We'd continued through the galleries, each with its singular character. "The beauty of this collection is that it reflects the cultural differences that actually exist in B.C.—First Nations, Euro Canadian, and Asian Canadian," said Collins. "And it's very digestible for the public, not overwhelming in any way."

Diverse works by the revered Emily Carr that hang in the Whistler Blackcomb Foundation gallery are always an eye-catcher, but the adjacent Barbeau-Owen gallery is where we found ourselves stalling, perhaps because of its nostalgic crucible of mountains and water and boats and villages.

"I often float through the galleries dressed in my hoody," said Collins of an outfit sure to blend in. "I'm curious how people move through these spaces and which works they gravitate towards—how they interact with the art."

He blends into the Whistler scene in other ways. A long-time frisbee aficionado who played Ultimate at the highest levels, Collins immediately bonded with Whistler's laidback disc-golf scene. He also makes twice-daily paddleboard excursions on Alta Lake and can't wait for cross-country skiing at Lost Lake or to explore the mountains and backcountry.

All this while steering the museum into a new era. The curatorial vision is shared with the staff, whose input is welcome, as with its current Ancestral Modern exhibit, a must-see collection of Australian Aboriginal Art. "We're working on a new model that's more generous and collaborative so the museum can be lighter on its feet," he noted. "Museums are traditionally about hoarding, but we're about sharing—98 per cent of our collection is on display versus maybe 10 per cent at other institutions."

En route to Collins' office, squeezing through hidden passageways in Being John Malkovitch style, we tour the museum's physical plant, itself a work of art—the pipes, ducts and conduits that maintain the interior climate a paean to industrial ingenuity and ergonomics.

In February, Collins mount his first show as curator: "Tales of an Empty Cabin: Somebody Nobody Was..." by Yukon-based Kaska Dene artist Joseph Tisiga, a reinterpretation of the infamous Grey Owl charade through numerous self-identity flips and an ever-evolving title. Collins sees this nuanced approach—versus directly oppositional—as a likely future for First Nations art.

He's heading to Whitehorse in December to meet with Tisiga. Upon return, he's hoping the view out his window is an extension of his office decor—snow white.