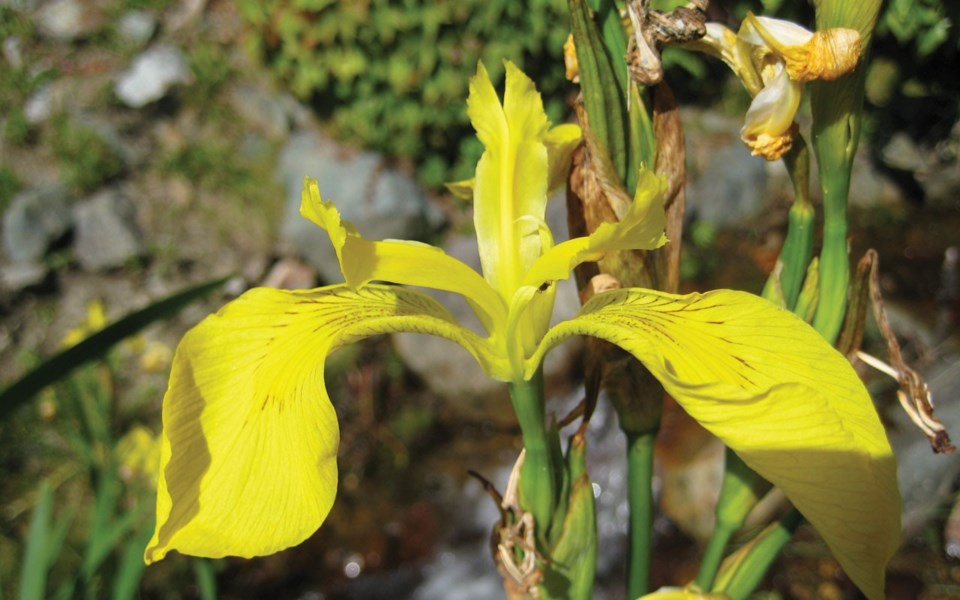 WORST WEED The Yellow Flag Iris made the Sea to Sky Invasive Species Council's list of the five worst weeds for the community's biodiversity. Photo submitted

Many Whistlerites recognize that invasive species are a threat to the community's biodiversity.

They can rapidly reproduce and displace native vegetation through competition for water, nutrients and space. That said, it can be difficult to keep track of which ones to look out for.

That's where a new campaign from the Sea to Sky Invasive Species Council (SSISC) comes in.

"They're the worst offenders because they have the biggest potential impact," said Clare Greenberg, executive director of the SSISC.

Greenberg said that all of the species in the campaign can be found in Whistler—but only in limited, controllable amounts. "To give you an example, the Purple Loosestrife has only been found on two sites in Whistler, and one of those has (already) been controlled," she said.

Greenberg said that the aim of the campaign is to raise the profile of specific species, so the public is educated about them.

"(We) want to give people a visual cue" for what to keep an eye out for she said.

So what should Whistlerites be on the look out for?

All of the weeds have distinctive flowers and are easily identifiable with a little bit of training, said Greenberg.

These five have the potential for causing significant damage to infrastructure, waterways, and animal and human health. "We're trying to prevent them from becoming a big problem," said Greenberg. "Our goal for the species is to eradicate them from Whistler—on all jurisdictions."

She said that it's important for the public to report the weeds to the SSISC if they happen to see them.

"Give us a call," she said, adding that someone form the organization will explain the next step to take depending on what weed was found.

For some species, like Scotch Broom, it's possible for the public to remove the weeds themselves. But others, like Japanese Knotweed, are more problematic. "Japanese Knotweed can regenerate from tiny fragments of the root or stem," said Greenberg.

New this year, the organization is encouraging people to adopt a piece of the Valley Trail to help keep it clear of Burdock.

"The Whistler community has a strong attachment to the Valley Trail, and we want to leverage this engagement by inviting community members to volunteer a fraction of their time towards keeping the trail free of invasive Burdock," said Greenberg.

Participants can visit www.ssisc.ca/burdock to sign up; families, businesses, roommates, groups of friends or coworkers are welcome to get involved in the program.

Burdock plants are relatively easy to remove—simply dig out the taproot or sever it below the root crown. Any seed heads (burs) should be bagged and disposed of with general household waste or in the invasive species bin at the transfer station, but the rest of the plant (leaves, roots) can be left to compost on site.

You can check out the posters and learn more about the five problem weeds on the organization's website at www.ssisc.ca/whistlerwanted.