Upgrades make highway safer for people in vehicles, but wildlife are paying the price
Jan 15, 2010 7:20 AM By: Clare Ogilvie 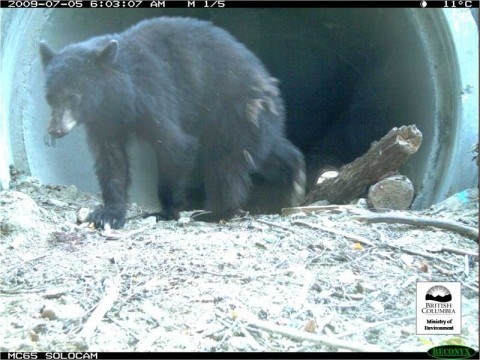 For months you could see the dried outlines of red-legged frogs killed crossing a stretch of Highway 99 that was once wetland and scrub.

It's likely hundreds of this species at risk were run over as they followed a migratory path that used to be safe in the wetland area near Pinecrest, just 15 minutes south of Whistler.

They are a casualty of the $600 million upgrade to the Sea to Sky Highway, which started in 2003.

Under the new Pinecrest design two kilometres of the road, which was widened to four lanes, was jogged east, away from the communities of Pinecrest and Black Tusk. According to an environmental assessment report prepared by the Sea-to-Sky Highway Improvement Project in May of 2005 if the new larger road was to be built residents wanted it moved away from their front doors due to concerns about increased noise, contamination of water supply, and safety.

However, moving the road meant paving over part of a wetland.

And, although final survey results aren't in yet, the steps taken by the highway developer, the B.C. Ministry of Transportation (MoT) and the Ministry of Environment to help the amphibians that live with the highway in the wetland area survive, don't seem to have worked.

They include building passageways under the highway and installing short netting fences along the edge of the road to guide the frogs into the tunnels.

"My sense of it is that they are not working very well for frogs," said Joshua Malt, an ecosystems biologist with the Ministry of Environment.

"I did... surveys and walked the highway and counted dead frogs and I counted over 200 amphibian mortalities in the summer season, from spring to fall.

"However, the actual number is likely to be much larger."

The frogs cross the road to get to the other side. When hundreds of new tadpole metamorph into frogs they go in search of new habitat because there are too many to stay where they are.

You can pave over wetlands to make roads but wildlife has to be moved. In this case over 1,000 frogs and other creatures were collected and moved in 2007 to a nearby wetland area. Hundreds of frogs were marked so they could be tracked.

More area is to be added to Brandywine Provincial Park as compensation for the loss of the wetland. It is not within hopping distance.

As you drive along the Pinecrest section you can see the mesh fencing, like mosquito wire, about 16 inches high, in some places. Closer inspection shows the bottom is not back filled and gaps exist at ground level. The top is not cupped so that any climbers would fall back. Several culverts ranging in size from one-metre to three-metres were also installed following Best Management Practices for Amphibians and Reptiles in Urban and Rural Environments in British Columbia (WLAP 2004) under the highway to facilitate the movement across the road.

But many salamanders and frogs climbed the fences, went underneath, or went around, said Malt.

"...If you look at the distribution of roadkill there is not less roadkill next to the passages," he said.

"It is all over the place so clearly the fencing isn't stopping them."

Malt also used motion-sensitive cameras at some tunnels to try and track which creatures were using them, though he said cameras don't capture frog-use well.

His in-person surveys also found very few of the marked frogs. The verdict is out on how well re-located amphibians survive said Malt.

"That is why we did mark the frogs and why we did that monitoring this year... to try to see what the survival was...," he said.

"But it was relatively limited because it was so hard to find frogs that were marked."

The situation at Pinecrest has been on the radar of John Buchanan for months. The long-time Squamish resident and wildlife advocate researcher said he doesn't understand how this was allowed to happen.

"I have to ask why MoT was allowed to construct a highway there in the first place," he said. "As soon as you fragment frog habitat it will be a death scene.

"They had a completion deadline hovering above them, and it is clear to me that the environment just got tossed aside to meet that goal.

"I don't know if a local extinction has happened here but I am starting to lean toward that as a possibility."

The government had committed to completing the highway in time for the 2010 Olympic and Paralympic Games.

Malt said the situation will be monitored this year and steps taken to try and prevent the same thing from happening again next migration season.

And he said lessons learned at this site would help in the future with highway development.

Frogs are not the only animals living along the upgraded highway. Deer, bears, small mammals such as skunks, weasels, coyotes, raccoons and even ducks live along the way. As the highway was upgraded different types of passageways were created at various locations to help migration from one side to the other.

Results have been mixed said Malt, though he is hopeful.

"With the cameras we got photos of a whole lot of wildlife in higher numbers and of more diversity that we ever expected, so that is quite exciting," he said.

"...I think that the small and medium sized mammals and that mother duck seem to be quite fine with using the them....

"But the bear and the deer... they check it out, they go in and go out, but I haven't seen anything go through. So they are a bit more hesitant."

On a recent Sunday one of the main wildlife passageways in Squamish was waterlogged, making it unlikely animals would use it.

Another three-metre culvert in the Eagleridge Bluffs wetland area, the size recommended by the environment ministry for amphibian crossings, comes out near a sheer drop to a B.C. Ferries parking lot.

Without fencing all the way along the road to direct the wildlife the success of these passageways is hit and miss.

But Angela Buckingham, chief biologist for the transportation ministry, said fencing along the highway is impractical. There are 72 access points to the highway and each one of those would need a gate or a cattle guard.

"We did certainly consider it for this corridor but given all this it was not workable," she said, adding that well over $2 million has been spent on studies and mitigation for wildlife.

"The Ministry of Transportation is very dedicated to doing what (it) can to protect wildlife and wildlife habitat, recognizing too that in upgrading the highway we implemented modern environmental design standards. But there also is a cost to that and we are very concerned about making sure there is value for the taxpayer..."

For his part Buchanan believes it will take human carnage to change the government's position on fencing.

The latest government statistics, from 1998 to 2007, show that six bears, 12 coyotes, 69 deer, 16 raccoons, and 15 other types of animals have been killed by vehicles between Squamish and Pemberton.

Buchanan believes these numbers are bare minimums and that the real numbers are much higher as these account for only the ones the highway workers remove.

Most animal deaths go unreported. And, he believes, the numbers will go up as more cars drive the road at greater speeds and wildlife is trapped due to the new concrete centre-line barrier system.

"I have lived in Squamish my whole life and I have never seen the type of wildlife kill, ever, that has been going on in the last year or so on the road," he said.

"You (fence) this because it is the right thing to do."