The long road to net zero 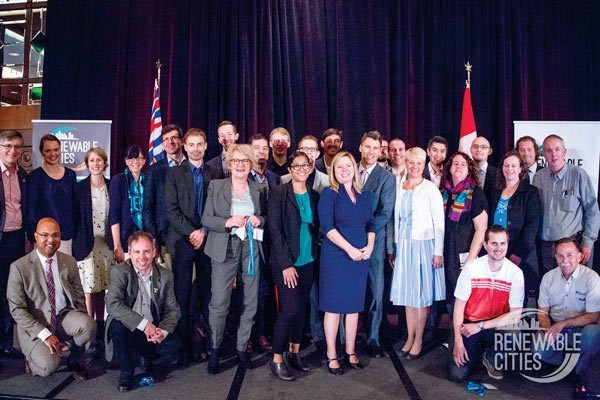 Renewable cities Staff and elected officials — including Whistler councillor Sue Maxwell — gather for a group photo after a session at the recent Renewable Cities conference. photo courtesy of Renewable Citires

When it comes to energy efficient buildings, few are as well versed as Bob Deeks, whose company RDC Fine Homes completed the province's first Net Zero energy home in 2010 and was one of the first builders in B.C. to adopt the Built Green and Energy Star labels.

"I've put a lot of time into the development of the Energy Code in B.C. — I sat on all the committee groups right from the visioning committee in 2015 that talked about what a long-term energy strategy looked like," Deeks said.

Deeks shared his insights on the code at Simon Fraser University's Renewable Cities conference in Vancouver from May 17 to 19 as one of four speakers at the conference's "Net Zero Without Glitches or Hitches: Putting the B.C. Energy Step Code Into Practice" session.

"Part of it was an education opportunity for the participants at the conference, the other part was for BC Hydro and the government to get some insight and feedback, almost like a focus group," Deeks said.

The Step Code represents both opportunities and challenges for municipalities depending on how they use it, he added.

"There is no requirement to engage with it, but for a municipality that wants to impose stricter regulations around energy efficiency, they have to follow through on the Step Code path," he said.

"They need to pay attention to the capacity that they have in their local area, the education of their builder groups as to what steps they might look at imposing, and would they use the Step Code for specific development areas and provide some sort of incentive to developers and builders to support that.

"So for example, if they wanted greater energy efficiency around a specific development area then they might offer density bonusing to offset some of those additional costs, recognizing that any of these changes are going to have a negative impact on housing affordability."

The Renewable Cities conference provided a forum for governments, industry, academics and other interested parties to discuss the move to renewables. The conference's stated mission is to support cities through the transition to 100 per cent renewable energy.

But when it comes to achieving that goal, there is no one single solution, said Whistler councillor Sue Maxwell, who also attended the conference.

"I think that's the value of kind of liasing with all these other communities that are working on this, is that it is, in the end, all these little details and little steps that help to make the big picture," Maxwell said.

"It's going to be lots of different steps we take to both reduce the amount of energy we need in total or shift to different systems as well."

Though Whistler has adopted a goal of 100 per cent renewable energy through its Community Energy and Climate Action Plan, there is still much work to be done on that front.

"And there is also a lot of opportunity, because when you're working on renewable energy, it's often benefiting in other areas," Maxwell said.

"There may be synergies with zero waste and reduced water use and livability, and if it's clean energy then also some health benefits as well."

With a change at the helm of B.C.'s legislature, it will be interesting to see where the new government puts its support for climate initiatives, Maxwell said, but there are still barriers at every level.

"One of the challenges is always that we need to move much faster than we're moving, and by we I mean us at municipal, provincial and federal government, as well as businesses and people, individuals.

"It takes a while to make changes to set up the systems for changes or convince people that changes are necessary, and so that's always a challenge."

Part of that mind shift comes down to the individual.

Twenty-three year old Anitra Paris — who studied natural resource conservation and works with Whistler's Bear Smart program — volunteered at the conference as a note taker so she could attend.

"The power is in small communities and municipalities — I think that's kind of what I took away from it, is we can totally do it, and you don't need to wait for big government to really spearhead it," she said.

And while Whistler has its own energy goals, making renewable energy a priority will be key moving forward.

"The people who have been able to do this, they have one committee or a task force or something to really make sure that it gets carried out," Paris said.

"The more people you have who kind of care about these things, I think that's what's going to make things start to happen. It's a chain reaction."