The lure of adventure amid the snow 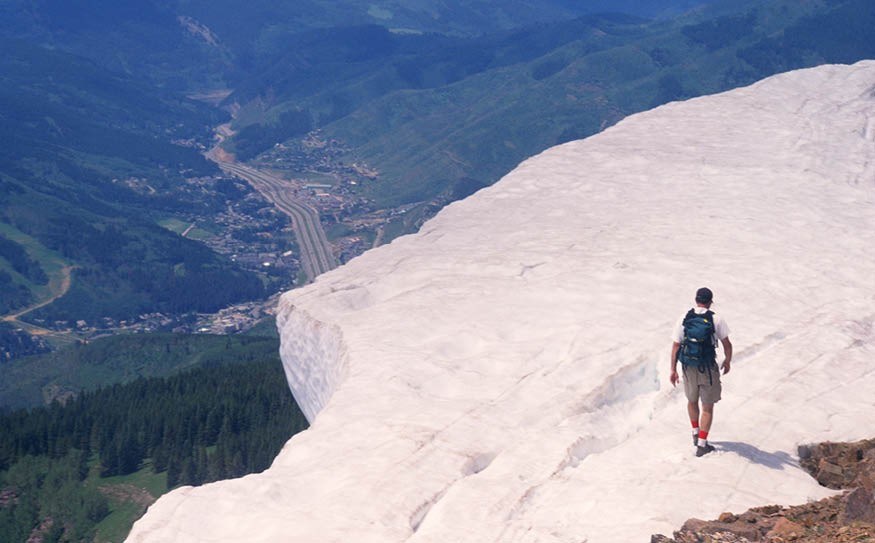 avalanche aware Without straying far from the supporting rocks, a hiker walks out onto a cornicein July on Bald Mountain, which overlooks Vail.

Dancing out on the edge of winter some years ago, I returned to solid ground with a good story. Others have not been so lucky.

My lark was near Colorado's Beaver Creek ski area. A buddy and I had taken the lifts in late afternoon, then left the ski area through a backcountry gate to create our own adventure in the Holy Cross Wilderness. Those were the best days, and nights, of my life. Leaving the orderly, safe world of groomed runs and mechanized transportation, we plodded uphill, breathing heavily, into the above-timber world of wind-filed snow called sastrugi.

It's a magical world. The lights of Vail twinkled below, and the shadowy peaks deep in the wilderness hulked forbiddingly, fetchingly.

With good eyes, you can see reasonably well at night, even under starlight. We were approaching the top of the 3,700 metre knob, where the wind each winter whips the snow into a cornice on the lee side of the ridge. Cornices can extend nine metres out over thin air.

A crack — and a whoosh: the cornice had broken a foot away from my buddy's outer ski, six metres of snow vanishing suddenly, launching an avalanche on the slope below. I had stayed closer to exposed ground, but instinctively I lunged desperately toward the certainty of rock and grass. We were both safe. Unshaken, my friend guffawed at the sight of me sprawled on the snow. We had the stars to ourselves, a good laugh, and a scary story to tell.

Inside ski areas, you can smack into trees or fall into a tree well. Either can kill you. Avalanches are rarely a risk.

In the backcountry, though, avalanches are the great danger. Canada has documented 10 this year and 11 last year, in both cases all in British Columbia. The U.S. is bigger and more populated, of course, and the statistics correspond: 30 fatalities this year and 36 last year. Victims have included an indiscriminating mix of snowmobilers, skiers and snowboarders. Big snow doesn't care.

Of course, it doesn't take much snow to cover you and incapacitate you. Technology only helps so much. Twice in the last decade, I have read newspaper stories in Denver by greenhorn reporters who suggested that had only the victims been carrying avalanche beacons, they would have lived. I was annoyed beyond words. That's like saying that had the driver been wearing a safety belt when he went off the road, he would have survived. Maybe — but probably not if he went off a cliff.

Avalanche transceivers aren't magic wands, says Dale Atkins, who has long worked in the world of avalanche forecasting and safety. He now represents a company that sells a radar-like tool called Recco, which allows rescuers to more rapidly locate avalanche victims. He speaks highly of a whole number of technological innovations in recent years, but warns that altogether they don't amount to insurance.

"The best thing to do is not get buried," he said. "It's important that people be equipped with transceivers, shovels, probe poles, Avalungs, air bags and cell phones. But they need to travel as if they left this stuff at home, because if you have to bet your life on it, you might be painfully disappointed," says Atkins.

Statistics bear out that advice. Two major studies have been done: One in Switzerland, and another by Dr. Jeff Boyd of Banff, who examined 204 avalanche fatalities in British Columbia and Alberta between 1984 and 2005. The statistics of the two studies differ very little: 75 per cent of victims die of asphyxiation.

Time is of the essence. Of those recovered within 15 minutes, survival is 93 per cent. Within 30 minutes, your odds of survival are little better than 50-50. After 35 minutes, only one in three people survive.

There are exceptions. Some avalanche victims have emerged after being buried for 23, even 24 hours.

On a steep, rocky slope or in trees, your odds might be further reduced, however. Almost a quarter of avalanche victims die from trauma, and even most people who died of suffocation have been banged up.

Illustrative is the experience in Bear Creek, the steep and stark backcountry haunt of skiers and riders adjacent to the ski area at Telluride, Colo. San Miguel County Sheriff Bill Masters says none of the avalanche victims there has ever died of suffocation. That included the most recent victim, a 38-year-old snowboarder in February who had most all of the new technological gizmos. They were, says the sheriff, all bloody when their bodies were recovered.

This caveat aside, technology does boost your odds in some situations. Atkins says that in cases where airbags were deployed, creating a full-body cushion around a victim, similar to what air bags do in cars, mortality has dropped to three per cent. Although they've been around in Europe for 20 years, few people used them in North America until the last few years. Atkins, however, has been carrying one on his backcountry travels for 15 years.

Stay at home and avoid all risk? Hardly. That's not living. I supposed many people would think me crazy for skiing atop a mountain at night. I danced out on the edge, but only so far. You can call me lucky, but also call me rich.