The pack came back much later 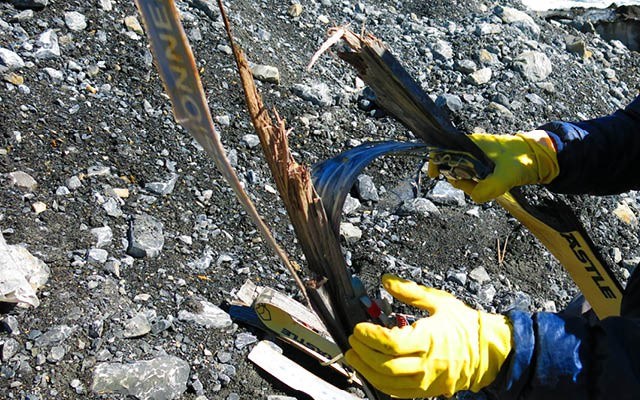 It happened so fast Robert Maiman lost all sense of time and continuity.

He and his partner, Dave Stephens, were skiing up the Athabasca Glacier on approach to the Columbia Icefield in the Rockies for a four-day ski mountaineering trip in May, 2001. Deteriorating weather left visibility just sufficient enough for the pair to navigate through the gauntlet below the cliffs of Snow Dome to the north — a site that regularly sends giant chunks of serac ice crashing onto the glacier below — and the crevasse-riddled icefall to the south. Despite having the third member of the group cancel at the last minute, and knowing the added risk of being just two on the glacier rope, the pair, who had skied the route before, decided to go anyway. With their camping gear carried by two, rather than three, their packs each weighed 30 kilograms. Thirty centimetres of fresh snow and a howling wind made travel difficult as they skinned uphill.

"It was so abrupt; it was a complete loss of orientation, of all reality," Maiman recalled. "I was fully conscious, but everything was black. It all happened in a matter of seconds, and I was looking for clues. Then I saw a glimmer of light out of my left eye, and I realized I had my goggles on, and that was making everything darker. I started putting two and two together — I'm falling! Why am I falling? I saw the bottom of the crevasse rushing up to meet me and YANK! The rope stopped my fall and I slammed into the crevasse wall about five metres above a ledge."

Dangling in the cold dark space with his skis still on, Maiman felt sharp pain as he hung in his harness with the heavy pack on his back.

On the surface, Stephens watched in disbelief as Maiman disappeared and the rope connecting them zippered into the glacier, stopping just three metres ahead of him. Quickly Stephens built an anchor, securing Maiman from falling any deeper.

"To say I was freaked would be an understatement," Maiman said. Collecting his thoughts, he inserted an ice screw into the crevasse wall and managed to remove his pack and hang it from the screw.

"Taking off the skis turned out to be quite a chore as well," he said. "I figured I was about 12 metres from the sunlight above. I was in a slot about 20 metres deep, 12 metres long and two metres wide. Wild ice sculptures at either end and above made me cringe. I could see that the reason I fell so far was because we had been skiing parallel to this crevasse."

Wearing only light layers as he had laboured uphill, Maiman donned every piece of clothing in his pack. On the surface he could hear Stephens yelling down to him, but couldn't understand a word. Shouting at the top of his lungs, he later learned Stephens never heard him. Then Maiman was alone as Stephens skied down the glacier, retracing their tracks and hoping he wouldn't also fall into any slots. Attempting to climb out on his own, Maiman realized the combination of frozen hands, injured thumb, overhanging ice bulges above him and prussic cord that was too large in diametre to grip their 8 mm glacier rope rendered escape impossible. He settled in to wait, pelted by fist-sized ice cubes.

Reaching a Brewster icefield snowcoach, Stephens contacted the Jasper National Park public safety wardens, who arrived in 30 minutes. By the time Maiman was pulled from the dark, cold depths of the glacier, five hours had passed. A lucky break in the stormy weather allowed the helicopter to fly him to a waiting ambulance, which shuttled him to hospital in Jasper. Due to the serac-threatened location and deteriorating weather, the rescuers had to leave his pack and skis in the crevasse.

Afterward Maiman counted his blessings; after four quarts of saline his only injury was his sore thumb. Three weeks later he followed GPS coordinates back to the site hoping to retrieve his pack, but the crevasse had been plugged with serac debris.

"That was sobering," he said.

Then in late August of this year, Maiman received an email.

"It was pretty bizarre, the email came out of the blue," Maiman said. "At first I didn't know what she was talking about."

An Icewalks.com guide had found his name printed in permanent ink on a backcountry shovel she found on the Athabasca Glacier. Through Facebook, she tracked him down. Photos she took helped Maiman realize his pack had indeed melted out. The following weekend, just a week before their wedding, Maiman and his (now) wife, Kathleen, trekked up to the site, which in summer consists of bare ice and ice-cored rocky moraine.

There he discovered the contents of his pack, lost in the glacier for 4,489 days, strewn in a three-metre debris trail on the rubbly surface. The debris was about 500 metres downslope from where he had fallen in.

"The smell was a bit rude," Maiman said. "But it was all there."

Crushed by the shifting glacier, his skis and bindings were destroyed.

"My sleeping mat looked like it had been target practice for something, it was full of holes," he said.

Outfitted with rubber gloves, he triaged the items he could keep, and those he couldn't. A little worse for wear, his 80-litre Lowe pack was still intact. Inside a Ziplock bag, a carrot appeared surprisingly unchanged. A Cliff bar was still inside its wrapper, but "the consistency was suspect." His winter-weight sleeping bag, just two weeks old at the time, was in good shape — except for the foul stench emanating from its down stuffing.

"My MSR stove looked like somebody had taken a sledgehammer to it," Maiman said. "The fuel bottles looked like they came from the movie Jaws and had been crushed in a shark's mouth."

Tempted to keep his mangled Nalgene water bottle as memorabilia, he changed his mind when he noticed green slime lining its inner walls.

After separating the items into plastic garbage bags, he loaded the foul-smelling trash into his old pack, then strapped it onto the one he wore up there. With all the items being wet, in the end the unwieldy load weighed as much as it did the day he fell in.

In May, with a solid team, Maiman finally made ski ascents of Twins Tower and the North Twin, as well as Snow Dome and Mount Kitchener.

The trip felt like coming full-circle, said Maiman, who lives in Calgary.

"There were so many things (in 2001) that conspired to make that event really serious, but I escaped, for the most part, unscathed," Maiman said. "But it did make me a better mountaineer."