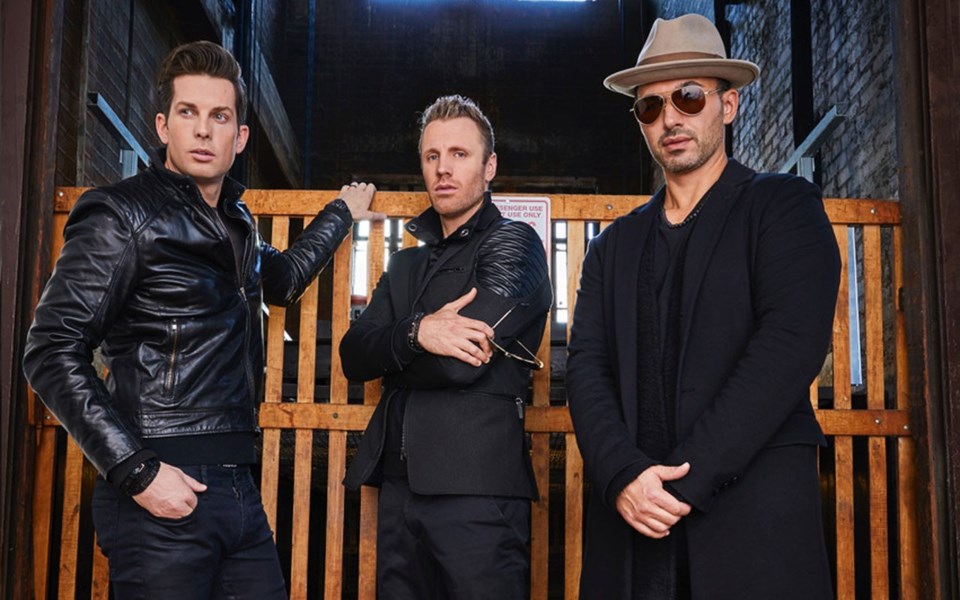 Think back—way back to Game 1 of the NBA finals in May.

It might be hard to remember, given the celebrating that’s ensued since The Raptors’ nation-shaking win, but kicking it all off was Canadian pop-opera act The Tenors with a rendition of “O Canada.”

It was the first time the national anthem had been sung at an NBA finals game.

“That was a massive experience for us,” says Fraser Walters, one of the three voices in the trio. “To be tapped and invited was just an otherworldly experience. The energy in that building—let alone across Canada—The Raptors really became the Canadian Raptors in that moment. We could feel the energy from coast to coast.”

But there was also pressure associated with the gig. As Walters points out, anthems at major sporting events can sometimes be fraught. Back in 2016, the trio was downsized from a quartet when fourth member Remigio Pereira changed a line of the anthem to “We’re all brothers and sisters. All lives matter to the great” before a baseball game. The Black Lives Matter movement—and its supporters—saw it as political stance against their cause.

“There’s a lot of controversial history with anthems—we’ve been involved in it ourselves,” Walters says. “We wanted to honour the moment and make it about the unification of our country. We feel it couldn’t have gone better. It was amazing to have the whole crowd singing with us.”

The Tenors have performed for plenty of other big-name events—and celebrities. They run the gamut from the White House Christmas tree lighting for the Obama family to the G20 Summit, the opening of the 2010 Olympic Games in Vancouver, and The Oprah Winfrey Show with Celine Dion.

They have also shared the stage with some big names over the year, including some that were a surprise.

“There are still moments you might be going to a private event and we haven’t been told ahead of time who might be there—a lot of those performers are secret,” Walters says. “They don’t want to let the cat out of the bag. One of those instances it was Paul McCartney. It was incredible walking in at sound check and seeing him on stage.”

There might not be any members of the Beatles in attendance, but there are plenty of other reasons Walters is looking forward to The Tenors’ Canada Day show in Whistler on July 1.

Walters grew up in the Lower Mainland—he now lives in New York with his family, while Clifton Murray lives in Vancouver, and Victor Micallef is in Toronto—and often came up to Whistler for some fun in the mountains.

“I grew up in Richmond, went to UBC, so Vancouver is my hood,” he says. “I grew up skiing in Whistler … This is the first time we’re doing a big outdoor show and obviously we’re honoured to be chosen for this kind of momentous celebration. We’re going to bring all our energy and more. And a lot of our families are going to be there partying with us.”

With the group working on their sixth album later this fall, they have plenty of material to draw from, he adds.

“There’s no shortage of songs to choose from, but we like to curate the list based on where we are and the expected audience,” Walters says. “There might be a couple of fun, upbeat numbers to get the crowd involved—maybe some sing along stuff. I hope they’re warmed up and ready to join in. It’s a mix—you’ll hear a couple we wrote for ourselves and familiar classics.”

Some of those “familiar classics” include well-loved songs to which they bring their emotive blended harmonies, like “Bohemian Rhapsody,” “Forever Young,” and “Hallelujah.”

“Honestly, every time you sing (a song like ‘Hallelujah’), it’s almost like it’s the first time,” Walters says. “There’s a depth to that lyric and melody, but we have a renewed energy every time we’re on stage because it’s a new collection of people in the audience.”

The Tenors perform at Whistler Olympic Plaza for free on July 1 as part of Canada Day celebrations at 8 p.m.