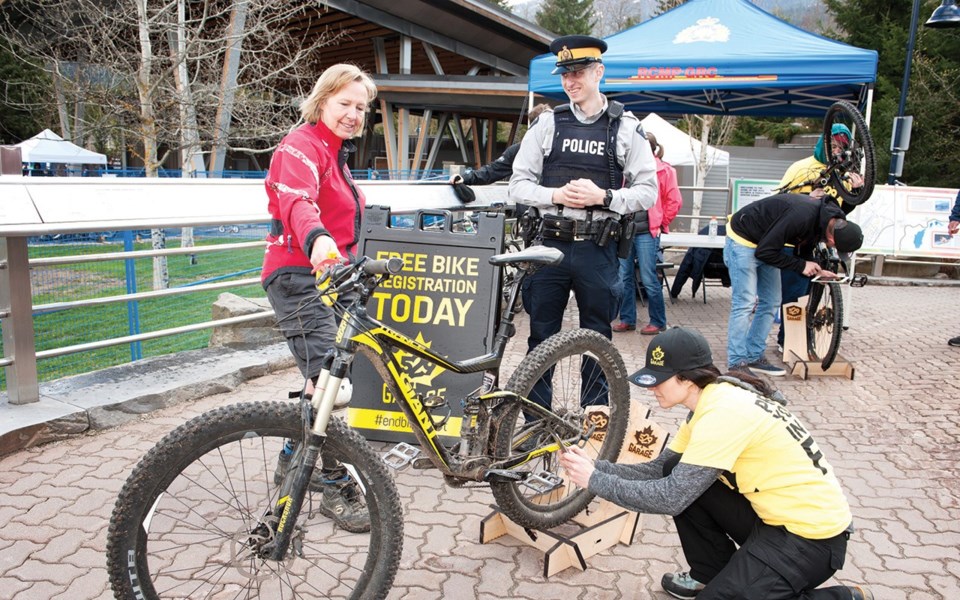 A Whistler RCMP and 529 Garage representative help someone register for the app, a database and recovery service that helps users and local police departments track down stolen bikes. File photo by David Buzzard / www.media-centre.ca

Being a hub for mountain biking has at least one unintended side effect for Whistler: the theft of bikes that can fetch the price of a small car.

One of the more common crimes to grace Whistler's RCMP's weekly police report, the detachment has made a concerted, multi-pronged effort to combat bike theft in recent years.

Between April and October 2019, the RCMP recorded approximately $85,000 in reported bike thefts. While that's more than the $40,000-plus reported in 2018, it should be noted that this year's total includes a single bike valued in excess of $32,000. It's also a steep drop from the 58 unrecovered thefts in 2017, valued at an estimated $156,000, and the 94 thefts valued at approximately $300,000 the year prior. (Whistler RCMP did not have the total number of thefts for 2019 tallied yet; the detachment typically presents its annual crime stats to mayor and council in the early New Year.)

Staff Sgt. Paul Hayes has credited the drop at least in part to the detachment's bait-bike program. The RCMP has partnered with local businesses to secure a rotating fleet of bikes that are strategically placed around the resort. The bikes are monitored 24 hours a day, and, when one is stolen, police dispatch is alerted, and the bike's exact location can be relayed in real time.

Police said the initiative has been especially useful in identifying prolific, repeat offenders, many of whom travel from the Lower Mainland and beyond to specifically target the kinds of expensive, high-end bikes found in Whistler, usually with the intention of selling them elsewhere.

In the spring, for instance, North Vancouver RCMP warned of a string of thefts that stretched from the Lower Mainland to Pemberton. At the time, investigators said it was likely a small group of offenders responsible for the majority of offences.

These days, bike theft is big business, valued at $650 million annually in North America. In Vancouver, bikes often double as street currency and can be easily traded for drugs. It's not uncommon for dealers to sell hot bikes on Craigslist as a lucrative side hustle, police say.

Interestingly, Whistler RCMP said no bait bikes were taken this spring and summer. Although there's no way to be sure, Hayes said it appears that "word is getting out that stealing a bike in Whistler is just not worth the effort.

"The Whistler RCMP will continue to employ various overt and covert ways to catch thieves in our community, which will include a robust bait bike program in 2020."

The other major effort police have taken up is partnering with 529 Garage, a bike registration and recovery service launched by former Microsoft executive and avid mountain biker J Allard (born James).

Police can be limited in their ability to recover stolen bikes given that many owners don't record their serial number, meaning investigators often only have a physical description to go off of—which, typically, is not enough to warrant a charge, even after a bike is found. With 529 Garage, users record their serial number and upload photos and a detailed description of their bike. After a bike is stolen, users can search the database by make and model, and an alert is sent out to members, police and bike shops within a 15-kilometre radius.

Local police have so far helped register hundreds of bikes to the app, setting up at popular local events like Granfondo Whistler. Across B.C., there are now more than 100,000 registered users on the app.