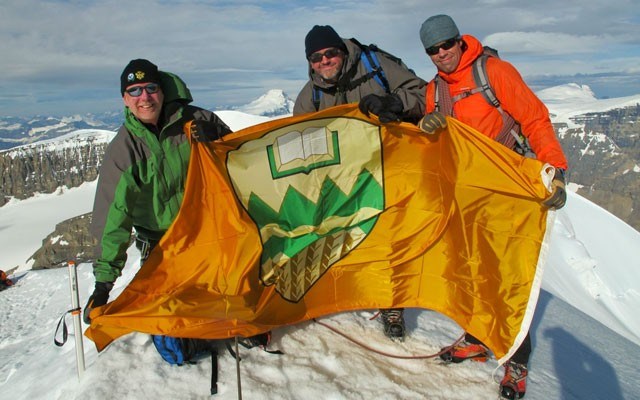 Hosted by the University of Alberta's (U of A) Canadian Mountain Studies Initiative (CMSI), the event's delegates came from as far as India, France, Switzerland, New Zealand, Austria, Indonesia, the U.K., U.S., and across Canada.

The conference speakers comprised a highly accomplished group presenting on a range of themes, including mountain literature, glaciology, wilderness in mountain parks, mixed media artwork, conservation initiatives, caving, and the impact of war, earthquakes and water.

The event grew from the creation of the U of A's Canadian Mountain Studies Initiative (CMSI), where the long-term aim is to encourage and support interdisciplinary research and learning, as well as to engage with community members.

After the CMSI launch, the conference steering committee — comprised of professors from the U of A's faculties of Arts, Science, and Physical Education and Recreation, as well as participants from Parks Canada and the Nakoda First Nation — expressed a shared desire that Thinking Mountains take place not at the U of A campus in Edmonton, but in the mountains.

"We were buoyed by the enthusiasm that came out of the 2012 launch of the Canadian Mountain Studies Initiative," said Zac Robinson, assistant professor of Physical Education and Recreation, and conference co-chair.

"We were excited to hold the event in Jasper, specifically, because of its rich historic connections to Edmonton. Both Edmonton and Jasper were fur-trade posts, depots along the waterways for people moving furs and other goods across the country. There was a local connection there, not to mention a theme of exchange that resonated with everyone."

Thinking Mountains will occur every three years, and since it is interdisciplinary and international in scope, plans are for future gatherings to take place in other mountain towns and areas such as Whistler or Vancouver in the Coast Mountains, the Rockies' Bow Valley, or Whitehorse in Yukon's St. Elias Mountains. Or, perhaps one day, even in mountains outside of Canada.

With delegates from around the world attending this year, Robinson said he and his colleagues believe they're onto a good thing.

"We had all the continents represented except Antarctica, but we had some glaciologists who spend a lot of time there," Robinson said.

Keynote speaker for this year's event was John Geiger, CEO of the Royal Canadian Geographic Society and author of several books, including The Third Man Factor and Frozen in Time.

While most of the conference was open to delegates only, New Zealand climber and writer Pat Deavoll and Alpinist magazine editor-in-chief Katie Ives participated in a public presentation examining the question of whether mountaineering is the most literary of all sports.

As well, the Jasper Art Guild hosted an exhibit of images reflecting the similarities and differences between the Rockies and the Himalayan mountain environment and cultures. Delegates also took part in a mountain photography workshop and a field trip to the Columbia Icefield Visitor Centre.

Unfortunately, in the aftermath of April's Nepal earthquake, Dr. Buhhda Basnyat from the Patan Academy of Health Sciences in Kathmandu, who planned to speak about high-altitude medicine, was obliged to cancel.

For everyone involved, Robinson said, it's always a treat to meet others who share a deep interest in mountain-related fields of study and recreation.

"Academics rarely meet professionally with others outside of our disciplinary-specific fields of study," Robinson said. "And so it's a unique meeting in that sense. But, Mountain Studies is inherently interdisciplinary. Like anyone being in the mountains, you want to know a bit about the climate, the ecology, the history and culture, the geology, its literature, and so forth. For us as academics, this type of engagement pushes our own individual research in new and unexpected directions. It drives new research and ideas."