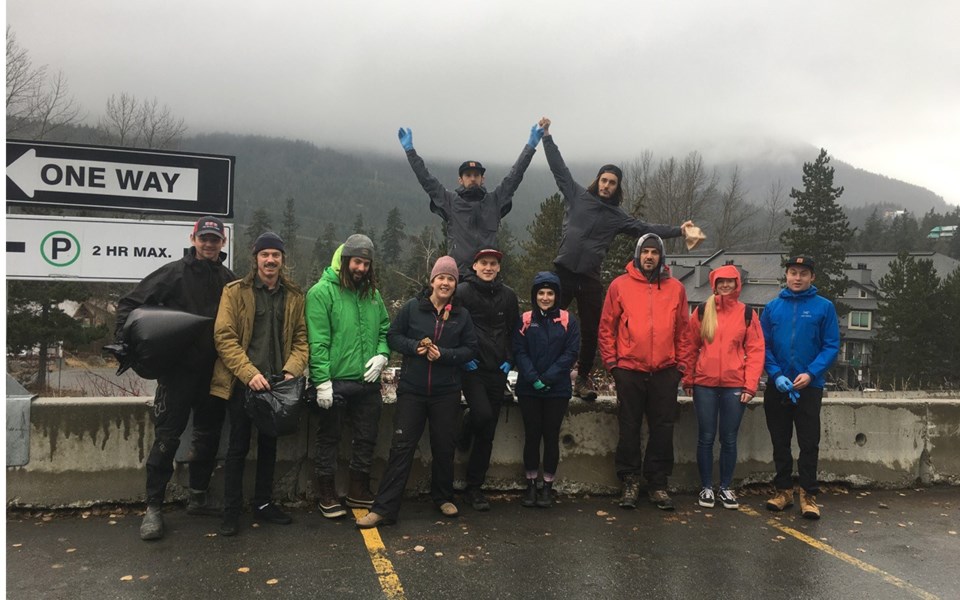 If you've driven on the highway over the past several weekends you may have noticed them: A loosely organized group of volunteers collecting all matter of garbage.

Barelli got the ball rolling in late October after he watched someone toss a Tim Horton's cup out of their car window.

From there, Barelli took to Instagram, where he put out a call for volunteers to his 174,000 followers.

That first cleanup day, only one person showed up. But despite the lack of manpower, the two collected about 300 kgs of garbage from a 1.5-kilometre stretch of Highway 99, near the entrance to the Soo Valley Road.

Over time, the movement has picked up steam. The cleanups have been taking place on a weekly basis.

In Barelli's estimation, it serves as an important reminder that environmental initiatives can come from the ground up, and that they don't have to be led by government.

"We haven't asked anybody to contact us [from government]," he said. "It really is a movement from 'the community' and 'the people.'"

The cleanup has been supported by local businesses such as RideWrap (which has hauled away garbage and covered tipping fees) and Whislife (which has provided coffee and food).

Barelli recently met with Whistler Mayor Jack Crompton. Crompton wanted to know what the movement was all about, explained Barelli.

"So we talked to him, and at some point in the conversation, he was like, 'what do you guys want?' And we said: 'nothing.'"

Volunteers will continue the cleanups until the snowfall. Over the winter, Barelli, Shane Roy and Ranya Dube are planning on forming an association—Ride for Humanity—that will help foster similar movements around the world.

Barelli added that Ride for Humanity's work won't be limited to highway cleanups. He said that there are opportunities for volunteers to take part in other projects, such as forest-fire mitigation efforts.

On Sunday, Nov. 17, volunteers collected about 946 kgs of garbage between the Petro-Canada in Pemberton and Nairn Falls, and the next morning, all sorts of "big chunks" of garbage had appeared back on the road, he said.

Roy blamed the problem on unrestrained garbage in pickup and dump trucks, as well as tourists.

"When we were out on the highway, cleaning up garbage by Nairn Falls, the tourists were coming out of the campground, and they would drive up the road and throw their garbage on the piles of garbage that we collected," he said. "They were actually just throwing garbage on the side of the road by us."

Overall, Roy said he's been heartened and encouraged by the groundswell of support the cleanup effort is receiving.

"Everybody is super excited about this idea," he said. "Everyone wants to offer a hand and get dirty."

If you want to take part in a cleanup, you can hit up Barelli on Instagram through @ride.for.humanity or @yoannbarelli.