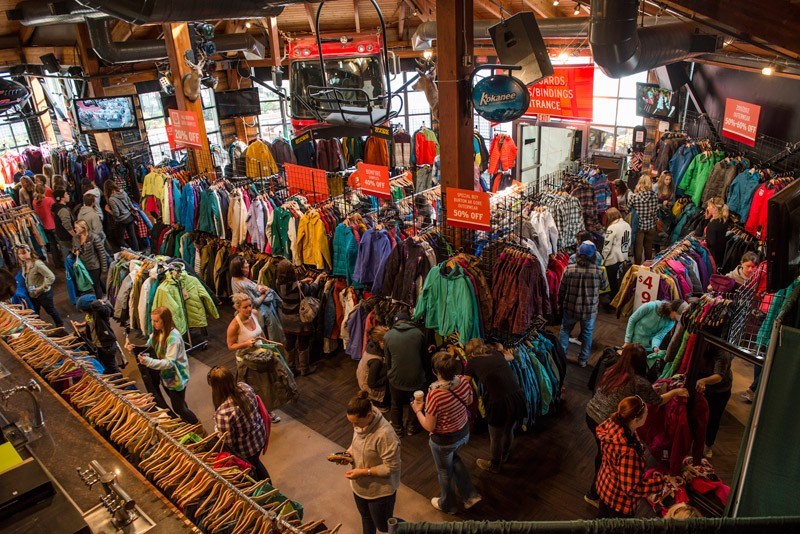 Thousands lined up for deals this weekend at the annual Whistler Blackcomb Turkey Sale.

"The fantastic weather during the Turkey Sale had a positive impact on our overall traffic at this year's sale," said Laura Gallant, Public Relations Coordinator at Whistler Blackcomb.

"The village was packed with visitors and everyone was sharing their enthusiasm for the coming winter season."

Said Dylan Coombs, up from Vancouver for the event:

"There are some great deals here. It's really awesome to be able to get everything I need. I save some money."

There was a lot to choose from, but getting the goods was definitely an adventure — there was often a line-up over the multi-day sale to get in, and always a line-up to pay. Getting just the pants, jackets or helmet you needed also required patience.

"They needed some more cashiers," said Jaz Sharma of Surrey, as she precariously navigated her new skis, pants, a helmet and socks along the marked pathways to pay.

"But it's not like I didn't expect this. I come every year."

But as the crowds mingled and shopped smiles outnumbered the frowns ten to one.

"It's been a great event, lots of people up from the city and pretty much all over B.C., so it has been spectacular."

Asked if the tough economy has affected the sale this year he said: "This is an event where people can get all of their gear at the start of the season for spectacular prices, so I think, yes, it had an affect, but what we see is people taking advantage of the sale and the good prices."

This year, for the first time, turkeys were actually part of the Turkey Sale. On Saturday, one hundred frozen turkeys were sold for $10 each with all proceeds from the Thanksgiving birds going towards the Whistler Food Bank.

"I got tired of telling my dad that we were not selling turkeys at the Turkey Sale, so we figured we would give it a go and we gave a donation of $1,000 to the foodbank," said Buchanan.

"It is a fun event and great for the community and if anything I think we will try to expand it next year."

The entire resort has embraced the "turkey sale" idea over the years with nearly all retailers, even those that don't sell winter gear offering great deals.

Whistler Blackcomb is scheduled to officially open on Thursday, November 22, 2012. Skiers and riders itching for snow can check out Whistler Blackcomb's first Wonder Reels episode "Snow," a sneak peek of all the powder to come this season.

Early Bird Season Pass offers are now over but information on tickets can be found at www.whistlerblackcomb or by calling 1-866-218-9687.