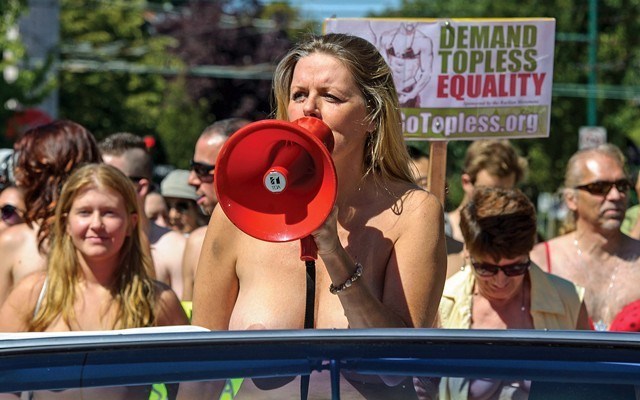 March organizer Denise Belisle at a topless march in Vancouver. The peaceful protest is coming to Whistler for the first time on Sunday, Aug. 25. PHOTO BY WARD PERRIN / COURTESY OF THE VANCOUVER SUN

Whistler is a family-friendly venue and this type of display is not appropriate for the local families or unsuspecting visitors.

This group's mandate for gender equality is flawed as flaunting their nakedness will only serve to encourage sexualizing women and disrespect/disregard for their bodies and not in any regard make them gender equal to men as they claim. This is totally different from their reference to women getting the vote in 1920 (in Pique's story "Topless march planned for Whistler," Aug. 22.)

By the way, I don't believe I have ever seen a topless man walking around Whistler, so much for equality.

There is already too much pressure on young women and blatant disregard for their rights to privacy. Young teens/preteens are very vulnerable at that age, especially young males and their expectations from the girls at school. "Hey, it must be OK because it was allowed publicly in Whistler."

There are so many youth in Whistler and protecting their innocence should be of more value to the decision-makers of this type of event. Pornography addiction can start at an early age, so can promiscuity and teen pregnancy.

Really? Holding it in the middle of Sunday afternoon and starting at close proximity and in clear view of the children's playground? What are they thinking?

I hope we have a voice to stop this from returning so we don't have to endure it for the next 10 years as Vancouver has.

Ask yourself if you would want your mother, sister, wife or daughter in this march and if the answer is "No," you can be sure it's just not morally right.

If it can't be stopped because of the court ruling that it's not actually indecent exposure (who are they kidding), perhaps there can be another way.

I would appreciate your support by adding your voice and support for keeping common decency and good moral values of top priority and not those of questionable intent.