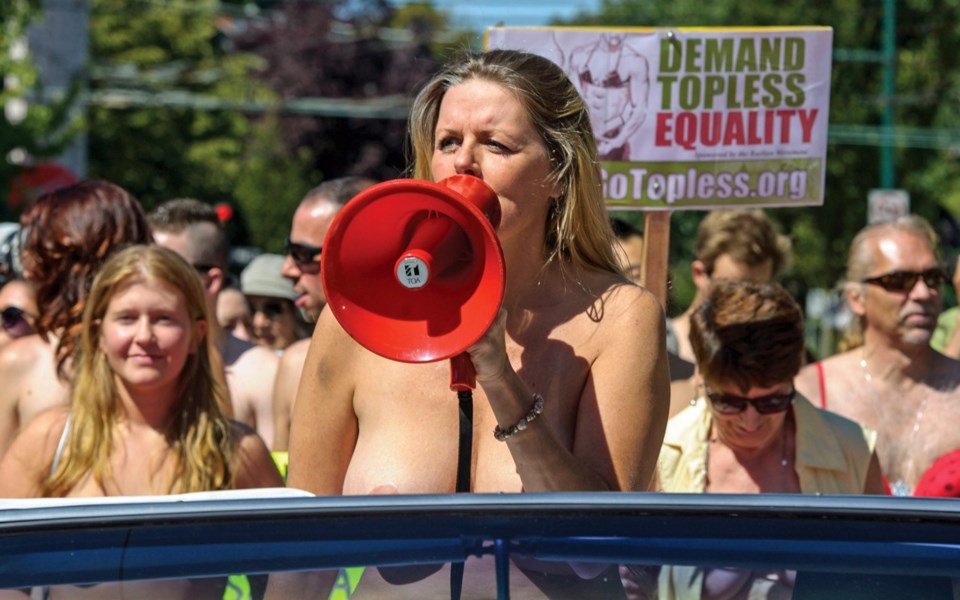 Denise Belisle at a topless march in Vancouver. The peaceful protest is coming to Whistler for the first time on Sunday, Aug. 25. Photo by ward perrin / Courtesy of the vancouver sun

when denise belisle first got involved with topless marches in Vancouver more than 10 years ago, it was something of a spectacle—hundreds of people stopped and stared, snapping pictures and the like.

"What I was telling the journalists at the time is that the day that this walk is a flop, I have succeeded," Belisle said in an interview on Aug. 8.

"Which makes sense, right? Because you don't want it to be a big thing."

And in recent years, the annual demonstration has become "less of a big deal," Belisle said.

As such, the international movement known as Go Topless Day is coming to Whistler.

Organizers are planning a peaceful march from the Olympic rings in Whistler Village to the base of Whistler Mountain starting at 1 p.m. on Sunday, Aug. 25.

All are welcome to attend.

Each year the event coincides with Women's Equality Day on Aug. 26, commemorating the 1920 adoption of the Nineteenth Amendment to the United States Constitution, which gave women the right to vote.

This year's march also takes place during the G7 summit in France, which, coincidentally, has gender equality as one of its mandates.

For Belisle, the march is about empowerment, the power of choice, and breaking the stigma surrounding breasts and their sexualization.

"Men's breasts can be just as sexy as women's breasts, or they can be quite un-sexy, and they're still allowed to be in public, right?" she said.

"So for me, that's the whole reason behind it ... just to stir a little bit the beliefs of people, and their old way of thinking, and to break the stigma that breasts are sexual.

"It's a big stigma to break, and that's what we're hoping to accomplish, and build up women's equality in all areas of our lives."

The Canadian Criminal Code does include sections on public decency, but what exactly constitutes an "indecent act" is open to interpretation by the courts.

Toplessness, in particular, has been successfully challenged in Canadian courts on more than one occasion (including in B.C. in 2000).

A spokesperson for the Resort Municipality of Whistler said it is aware of the peaceful protest/march, and that under the Canadian Charter of Rights and Freedoms, everyone has the right to freedom of peaceful assembly.

Belisle said she would also notify the RCMP.

The event in Whistler coincides with marches in more than a dozen cities around the world, including New York City, Seoul, South Korea and Freiburg, Germany.

The full scope of the movement can be tracked on the organization's "Boob Map," which is posted on its website.

"I've been taking some courses in marketing and stuff like that, and they say women are the decision makers in the house when it comes to buying," Belisle said.

"Well it's time for us to be the decision maker in every area of our life, and be able to be empowered and have our rights respected, and not be pushovers."