Economic downturn expected to impact Whistler, but there are bright spots
Oct 17, 2008 7:25 AM By: Andrew Mitchell 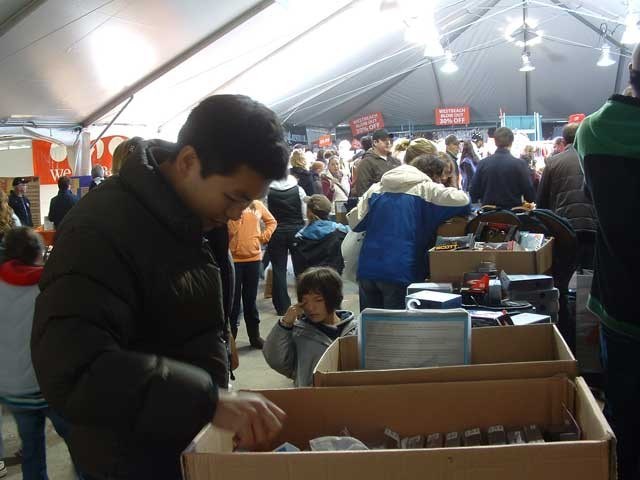 Discount Count More people but less money was spent at the 2008 Turkey Sale, possibly a sign of things to come

Tourism Whistler president Barrett Fisher didn’t sugar coat the possible impacts of the economic meltdown at Tourism Whistler’s all-members meeting on Oct. 9, but called on the association’s partners in the resort to work together to meet the challenge.

“We have some tough times ahead, it’s been doom and gloom on the market side, but we have a choice,” she said. “We can either recognize that and adapt our strategies, or we can do nothing and follow (the market).

“The U.S. market decline is nothing new,” she added, “it really started back in 2007 (with the subprime mortgage issue).”

Tourism Whistler released several scenarios for the coming winter season. The worst-case scenario, based on Tourism Whistler’s long-term forecast and conversations with agents, is an overall 12 per cent drop in visitors this season compared to last. Even the best-case scenario, with the resort taking several steps recommended by Tourism Whistler, will result in a five per cent drop. Given the scope of the financial crisis, Fisher said, Whistler is in a better position than other resorts because of a superior product, reputation, location, and the additional attention the resort community will receive as a result of the Olympic Games, Olympic test events and initiatives like the Peak 2 Peak gondola.

“If we do nothing, we’ll be down 12 per cent,” she said. “If we work at it, maybe we’ll see a drop of nine per cent. If we really come together as a resort, if we co-operate, think strategically and look at prices and… act on the opportunities we could potentially be looking at a better case scenario of five per cent.”

Arlene Schieven, vice president of marketing, said we can expect the coming winter to be similar to the 2004-05 winter season, when the lack of snow in January and February kept visitors away. As well, she noted that the decline started last winter as the number of paid room nights dropped one per cent in February and March after a strong start to the season in December and early January.

While most markets appear to be trending downward, Schieven expects the regional market to be down slightly this season but otherwise strong and recommended a renewed focus on the Lower Mainland and Washington State.

Most foreign markets, including the U.S. and U.K. are expected to decline. The exception is Germany, where an increase is expected, partially because of the Olympics and the test events taking place at Olympic venues this winter. Australia was also poised for growth, but Tourism Whistler is cautious about their forecast given the recent drop in value of the Australian dollar.

Tourism Whistler also did a survey of Washington and California visitors last season, and found that roughly a third were planning to take fewer trips, and a third were taking less expensive trips. “About 25 to 30 per cent said (the economy) wouldn’t affect them, but we need more than that,” she said.

Karen Goodwin, director of sales, also gave a presentation. Goodwin lamented the fact that 25 airlines went under last year, including Zoom Airlines which represents 15,000 seats to B.C. (far less than the 50,000 quoted in a previous article). As well, she quoted a study that found that up to 30 more airlines will go out of business this year.

“It may not affect us directly, but it affects confidence,” she said. “When XL Airline went under three weeks ago, they stranded 60,000 people.”

In addition, fewer flights from the U.S., Toronto, and Japan will be landing at Vancouver International Airport because of the costs involved. Comparatively, Goodwin said it costs airlines about twice as much to fly into to Vancouver as it does to fly to Colorado.

Diana Lyons, vice president of operations, also presented the results of her telephone surveys with booking agents around the world. The results of those surveys are confidential, but most agents expect drops in the double digits.

She also noted that there were a half million empty rooms in the first three months of 2008, and that the drop predicted will add another 100,000 empty rooms to the total. As well, Whistler’s average daily rate for rooms was creeping up in the past year, and she said that accommodation providers were pricing themselves out of the market.

“The average is over $300, which is a big concern for us… and we’re also seeing the length of stay decline,” she said. She noted that many accommodation providers in other resorts are providing discounts of 25 to 30 per cent to agents and package deals, while local accommodation partners are offering a 10 to 15 per cent.

With the bad news out on the table, Tourism Whistler announced its strategies for dealing with the economic downturn. For Schieven, that means refocusing marketing spending on locations where there was a high rate of return last year and on the regional market.

When asked how Whistler could compete with other B.C. resorts that are vying for the same regional market, she said that because of its location Whistler does a better job attracting two- to three-day visitors than other resorts who typically do better attracting guests for five to seven days. She also pointed to packages being offered to the local market, including a two nights for under $200 program.

Tourism Whistler has booked a 30-second commercial that will be on Outdoor Life Network and other channels, magazine ads in the mainstream publications (partnering with Whistler-Blackcomb to promote Peak 2 Peak), and newspaper ads in targeted cities like Vancouver, Toronto, Los Angeles, and Sydney, Australia, as well as in Canada’s national newspapers.

Lyons talked about Whistler’s promotions for the coming season, including the Book Early and Save campaign that lets visitors save up to 35 per cent. The closing date for the promotion is Nov. 15, but if bookings are slow the date may be extended to Nov. 30.

As well, she said that agents should focus on value, as well as the big mountain experience, the new Peak 2 Peak Gondola, the favourable exchange rates for American visitors, lower gas prices, and the family holiday experience.

She also identified some obstacles to Whistler travel. For one, she recommended that some hotels change their deposit and cancellation policy to allow last minute cancellations. “It’s better to book them and to take the risk than it is not to book them in at all (because they’re scared of losing their deposit),” she said.

She also advised accommodation partners to look at their minimum length of stay requirements. Hotels should still protect their weekends, she said, but accommodation providers should also be flexible for mid-week bookings.

As well, she advised hotels to look closely at their pricing from day to day, and urged them to try and be consistent. “It’s confusing customers who don’t understand why there’s a price change from Tuesday to Thursday,” she said.

She also urged the food and beverage industry, and retail industry, to get involved with packages. One area where Whistler comes up short compared to sun resorts and winter destinations in Europe is that we don’t have an all-inclusive option for lower income travellers.

Goodwin futher recommended that Whistler keep price parity with other ski resorts that are already lowering their prices in response to the economic crisis.

Fisher cautioned that Tourism Whistler’s forecast is based on older data, and that the economic crisis is still unfolding. “We don’t know what all the impacts are going to be,” she said. “But at the end of the day, I’d still rather be us than other resorts.”