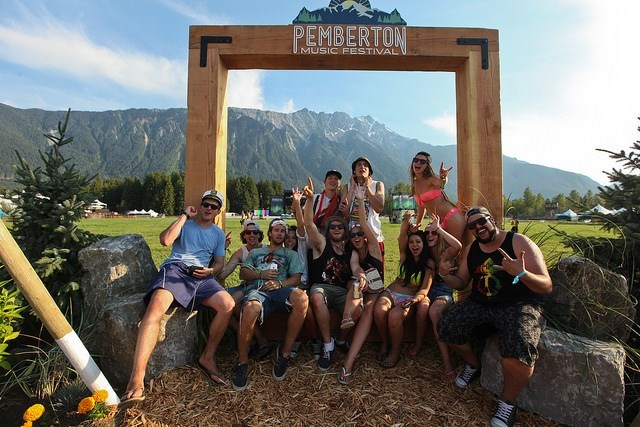 READY TO ROCK Festivalgoers are flowing into the Pemberton festival grounds ready to enjoy the three-day event. Photo courtesy of the Pemberton Festival

If you're headed to the Pemberton Music Festival this weekend there are a few things you should know.

Shuttle services from Whistler started Friday morning at 10 a.m., leaving from the Creekside parking lot, with the last bus heading north at 8:30 p.m.

"The last ride back is an hour after the show stops, so between two and three in the morning," said Maureen Douglas, director of community relations with the festival, adding that the shuttles will be running on a frequent loop to and from the festival in between those times.

"People won't wait more than 15-20 minutes for a bus at the most," Douglas said.

If you don't need to park and ride, you can also catch a shuttle from Whistler Olympic Plaza along Blackcomb Way, and those will be running on the same time, same loop, Douglas said.

There's no day parking at the festival site, so the shuttles are a must.

If you're coming from north of the festival site, there is a park-and-ride located at the Continental Pole yard at the corner of Highway 99 and the turnoff to the Duffey Lake Road.

More than half of the campers arrived on site on Thursday, with very little slowdown, Douglas said.

"It was really smooth. It slows down a bit right at the site for safety, and there's lots of traffic management there just to help people through, but in terms of cars and inflow it was excellent," she said.

The next big wave is expected hit this morning and this afternoon (July 18), so people should be prepared for waits of up to 20-30 minutes.

People who live in the Pemberton area do not need a special pass to travel through the festival area, but they do need a residential parking pass to park on the streets of Pemberton.

"Last timeÉ there were folks in town who couldn't even get in their driveways, so there is a parking permit plan in place that runs from (Thursday) through to Sunday," Douglas said.

"While the arrival of festivalgoers will be spread out over three days,most of them will be leaving Monday, so we do anticipate a little bit heavier load leaving Pemberton on Monday," Douglas said.

"But again, they're all flowing straight out of town, so there's not really any pinch points once they're on the highway."

While a pedestrian bridge set up over the highway should minimize the amount of foot traffic on the ground, there may still be some pedestrians or cyclists on the highway, Douglas said.

"There will be people on that highway — vehicles, foot or bike — that might not be as familiar with Pemberton as locals are," she said.

"We're just asking people to take their time, and we're keeping things moving, but to keep an eye out so everybody stays safe."

Tickets are still available at www.pembertonmusicfestival.com.Ê