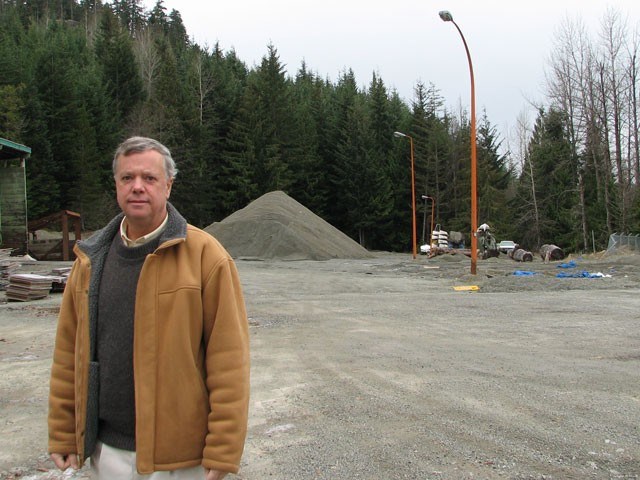 Business Helping Business Tom Horler, co-chair of the task force aimed to find solutions to the seasonal housing shortage stands on the site at the old highways work yard, which currently lies empty. The site is owned by First Nations. It was selected because it's flat, serviced and close to the village. Photo by Alison Taylor.

Preliminary costs for a temporary trailer park that will accommodate almost 200 seasonal workers have come in on target.

Early estimates for the park have been pegged at roughly $500 to $600 per bed.

“The initial prices we’ve gotten are not cost prohibitive, so that’s encouraging,” said Councillor Ralph Forsyth, co-chair of the H.O.M.E. (Housing Our Many Employees) task force.

The plan is to place 180 employee beds in temporary housing on the old highways works yard, opposite Alta Vista. The trailers would be leased from a Vancouver-based supplier for two years. They would be available next winter through until after the 2010 Olympic and Paralympic Games.

Part of the deal to ensure the trailers don’t remain on site is that they will revert to Squamish and Lil’wat First Nations after the 2010 Games.

The two First Nations are the new owners of the highways works yard site, as per a deal with the municipality this summer.

“In exchange for rent we would give the trailers to First Nations at the end of two years and then they would take them off-site and use them to whatever they think is their best purpose,” said Horler. “That’s the formula we’re looking for.”

The deal will be presented to First Nations this week.

But their approval alone won’t give it the green light.

Among other things the task force needs to convince council to approve zoning for temporary trailers on that site.

“(Councillor) Gordon McKeever and I (who are on the task force) don’t think that anything is off the table,” said Forsyth. “Everything needs to be considered and we haven’t really had a broad discussion about it at the council table.”

In addition to council’s approval, the site servicing may need to be upgraded to accommodate 180 people, and there could be some environmental clean-up work needed on site.

Another crucial component is to get business owners on board.

Business owners will need to sign a lease for two years and in turn rent the units to their employees.

“This is a break-even proposition for the business owner but in fact they actually benefit because then they have an employee,” said Horler.

Wild Willies owner Bill Lamond is “all for it.”

“It’s the only way to house people cheap enough,” he said.

Seasonal workers are looking for a safe place to sleep and store their gear, he added.

“They want it as cheap as possible so they don’t have to work three jobs.”

He is currently under-staffed by roughly half a dozen employees. That could force him to close his stores in the middle of the day.

“Once again there will be less services for the guests,” he sighed.

That being said, Lamond was reticent to support the trailer camp idea as a year-round concept. The housing crunch happens every year from November to April.

His suggestion then is that whoever is running the trailer project, be it the Whistler Housing Authority or the Whistler Chamber of Commerce, needs to run it like a business and charge accordingly to break even, though that could mean renting it for higher rents in the winter, and cheaper rents in the summer.

“If they have to operate like the rest of the world does, within a budget, without any subsidy… like every other homeowner in Whistler does, then that’s fine,” said Lamond.

“It’s a great sign because it’s the only choice I think we have,” he said.

“I don’t know that there’s going to be land, financial resources or building resources to build anything else prior to the Olympics and if this situation is facing us now, (the trailers are) literally, I think, our only option.

“What are the other options? I don’t know of any and a lot of good minds have come together to try to figure that out.”

This winter he’s seeing landlords charging exorbitant rents. Other renters are leasing space to their friends, be it on the hall landing or beside the hot water tank, at a premium.

Dozens more are living in B&Bs and hostels and though they have jobs and want to stay they may be forced to leave town because they cannot find a more permanent place to call home for the season.

“The market is willing to bear it but it just seems criminal,” said McDonnell.

The idea for a trailer park was sparked again recently after business owners met for a brainstorming session over the seasonal housing crisis.

“I understand that it may not be the most popular choice but the community needs to have that debate because we’re at a loss to what we’re going to do during the worst housing crunch that I’ve seen here ever,” said Forsyth. “I don’t see suites opening up. We haven’t gotten any traction with what we all thought was a great idea with the H.O.M.E. matching program. And we’re not going to build our way out of it. We’ve got to do what we’ve got to do.”