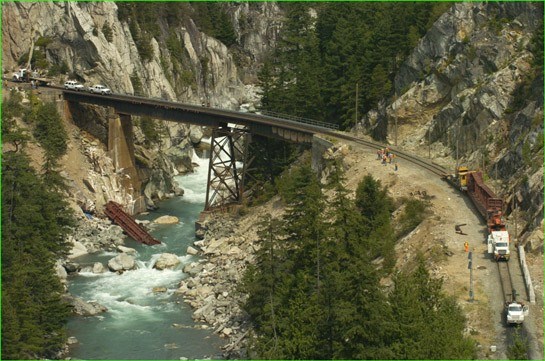 Main-track train derailments in BC involving dangerous goods, like this August 5, 2006 Cheakamus Canyon accident, more than doubled last year according to the Transportation Safety Board of Canada. Photo by Bonny Makareawicz

Main-line track rail derailments in British Columbia were the second highest in the country last year, contributing to a 22 per cent increase across the country, according to the Transportation Safety Board of Canada.

Although rail activity increased by only three per cent in 2005 and six per cent over the past five years, BC main-line derailments rose 34 per cent, up from 32 in 2004 to 42 in 2005, the safety regulator said in a report released this week. Main-track derailments in B.C. involving dangerous goods more than doubled: five in 2005, up from two in 2004.

Canadian National Railway main-line derailments jumped 35 per cent. The safety board said CN had 103 domestic main-track derailments nationwide last year, up from 76 in 2004.

"CN … is aggressively addressing this accident performance through thorough data and trend analysis, increased track and equipment monitoring, and a focus on employee behavior, rules compliance and management supervision." said CN spokesperson Mark Hallman in an email. "CN has steadily increased the amount of technology used to inspect and detect flaws in rails, track geometry and wheels."

Canadian Pacific Railway also had an increase in national main-line derailments; 66 last year compared with 63 in 2004.