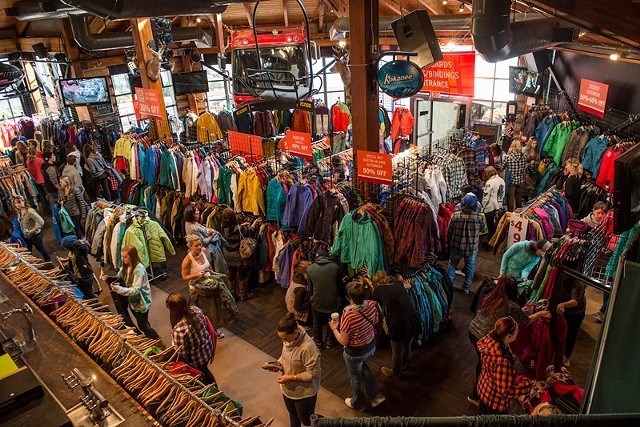 The biggest sale of the year returned to Whistler this Thanksgiving, with thousands gobbling up the deals at Whistler Blackcomb’s Legendary Turkey Sale.

“The resort was once again busy with guests looking to take advantage of amazing early season deals on ski and snowboard gear,” wrote Whistler Blackcomb’s merchandizing manager, Josh Buchanan, in an email.

The annual blow-out sale, which kicked off Friday, Oct. 10 and closed Thanksgiving Monday, saw droves of locals and visitors alike braving the long line-ups at the Blackcomb Day Lodge to get their hands on some discount winter gear that was up to 70 per cent off.

Aussie Chris Legg, who was up from Vancouver for his first Turkey Sale, said it was unlike anything he’s ever seen before.

“There are heaps of good deals,” he said. “Everything is in one spot. I’ve never been to anything like it.”

Former Whistlerite Thomas Roces, who now resides in Vancouver, has been coming to the Turkey Sale for years, and still remembers one particular deal he missed out on.

“Probably the biggest regret I’ve had was when I saw a pair of Lib Tech skis for $300 and I didn’t pull the trigger,” he laughs before explaining what keeps him coming back time and time again.

“There’s definitely fresh gear every single year. You get last year’s models, and then they added on the mountain bike gear as well, which is pretty cool because you get to cover both summer and winter sports.”

The mountain bike equipment could be found along with plenty of winter gear under the tent at the base of Blackcomb, home of the yearly SWAP (Sale with Awesome Prices) for quality pre-owned equipment combined with a selection of clothing and accessories from Whistler Blackcomb stores and several other local retailers. A portion of the proceeds from SWAP goes to support the Whistler Mountain Ski Club.

“Mountain biking has been a big part of this weekend,” Buchanan said. “The bike park is in great shape and it not only provides one last blast down A-Line, but some great end of season savings on bikes and gear.”

The increased traffic to the resort right in the middle of shoulder season also benefits other local businesses hoping to funnel some of the activity of the Turkey Sale into their own stores, Buchanan said.

“This weekend has become the catalyst for the winter season,” he said. “The resort as a whole is busy; from hotels, the farmers’ market, retailers and restaurants. I believe everyone benefits from the increased traffic generated by the Turkey Sale.”

For the third year, Whistler Blackcomb offered $15 turkeys ahead of Thanksgiving, with all of the proceeds going to the Whistler Food Bank. A total of $1,500 was raised over the weekend.

Whistler Blackcomb is scheduled to open the ski season on Nov. 27.