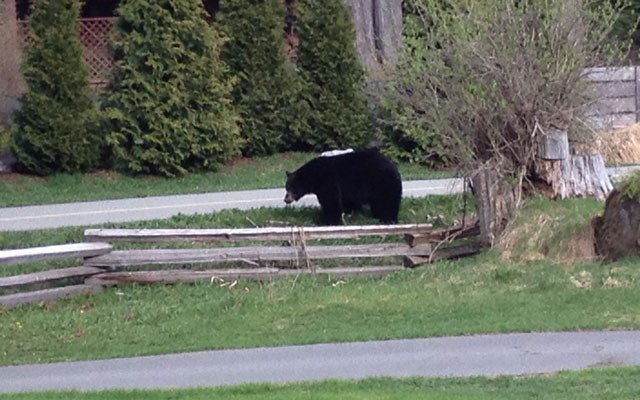 TWO KILLED A black bear is shown grazing near Whistler Golf Course in this file photo. Two bears have been destroyed this week. File photo by Clare Ogilvie

Two black bears have been killed in as many days as a weak berry crop persists in the area driving the bruins into the valley.

One of the bears killed was released from Critter Care in June high up the Chance Creek Forest Service Road.

"The bear was a very persistent bear," conservation officer Simon Gravel said. "It was a well-known bear that was actually captured in a house (in Whistler) last year as a cub.

"For the past month, we've had some complaints about the bear."

At the time the bear was initially captured by the Conservation Officer Service (COS) in July 2014 as a cub, along with its female sibling, the mother was destroyed. The cubs were taken to Critter Care in Langley, whose policy it is to have as little contact as possible with the bears.

Gravel noted the bear was so comfortable around humans that he would allow humans to pet it.

"He's been pushing into doors, trying to access houses and walking into residential areas," he said, adding that the conservation service will likely be looking into Critter Care cubs in light of the experience with this cub, dubbed Balsam.

"We need to take a second look... and look at what options there are to improve their (the bears') behaviour," said Gravel.

Then on Monday night (Sept. 14), a two-year-old female bear accessed Whistler Village around 6:30 p.m. Gravel said RCMP officers responded to the call and killed the bear. He added the bear was not tagged, but had been spotted in and around the village in recent days.

"The officer responding judged that it was a public safety concern and shot the bear while conservation officers were responding (from Squamish)," Gravel said.

RCMP Sgt. Rob Knapton said the bear was initially spotted in a tree before making its way down to the village near the Hilton.

Like Gravel, Knapton said the officer felt the bear was a danger to the public.

"We had a bear which was in a tree with about 50 people around it. The bear ended up coming down and then it came back into the village," Knapton said. "We ended up having to put the bear down near the Hilton."

Knapton said officers are not equipped with tranquilizing equipment and the responding officer concluded there wasn't time for conservation officers to arrive and the only response was destroying the bear right then and there.

"I understand the bear had been a problem in the Stroll area and they (COS) were considering the same course of action," he said.

With a low berry crop and several bear sightings in neighbourhoods around Whistler reported on social media, Gravel said the COS is pondering its next move with the Get Bear Smart Society.

"We are always getting new techniques and measures we can take for reducing human-caused wildlife conflict," he said.

Gravel is not inclined to use a tactic like diversionary feeding to keep the bears out of high traffic areas.

Get Bear Smart Society executive director Sylvia Dolson was on holiday and unavailable for comment, but the organization's website said diversionary feeding is only a temporary, unsustainable and costly solution, but also cited a study suggesting bears that become food-conditioned in this way do not become nuisances and threats to public safety.

Gravel declined to get into detail about which strategies the COS might employ.

He stressed that people must control attractants and must not approach bears, noting there have been numerous reports of people getting too close to the bears.

"That's something we're fighting because that contributes to the bear becoming very habituated and not having any fear of humans," he said.

"It's very important to report bear sightings in urban settings like this," he said.