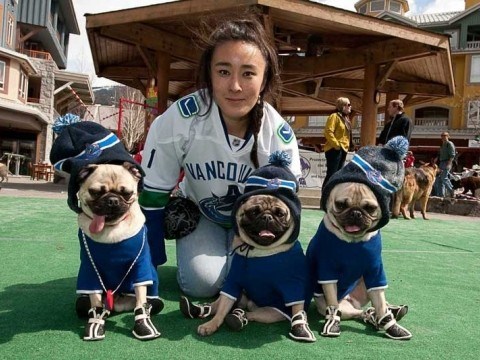 There wasn't much sign of the global economic recession for some Whistler businesses during the annual Telus World Ski and Snowboard Festival (TWSSF).

Rather, the Cillage was thronged with crowds last weekend - goggle-tanned skiers, dog lovers taking part in the doggy parade, music fans grooving to the live entertainment, and generally, a lot of smiling faces.

For some village shop owners, business was on par with last year's festival numbers - this, despite business being down overall for the 2008-09 season.

"Given the environment that all businesses are faced with these days, to end the season on such a positive note... it exceeded our expectations," said Dave Brownlie, Whistler Blackcomb's (WB) president and chief operating officer.

While WB does not release its skier visit numbers, Brownlie said they were "very pleased" with the festival and the draw. He gives due credit to the team at Watermark Communications Inc. who put it on. To have the mountains busy with skiers and riders in late April, said Brownlie, means the TWSSF is doing exactly what it set out to do - extending the ski season and ending it with a bang.

WB wasn't the only business reaping the benefits.

"The numbers reflected quite close to last year's event, which to me was pretty amazing to do in this economic climate."

He admitted he was nervous about what those numbers were going to be heading into the festival, given that business in his three locations overall is down roughly 12 per cent this season.

At Citta's, where local legends The Hairfarmers entertained a packed house on both festival weekends, the story was the same. Business overall is down for the bar this season, admitted general manager Scott Gadsby, but that slow-down wasn't in evidence during the TWSSF, which stretched from April 17 to 26.

"The live entertainment (on the patio) really helped us out," he said.

Even during the festival's biggest musical draw - the Metric performance at the main stage, which drew an estimated 8,000 strong crowd away from Citta's towards Skiers Plaza - his patio was still packed.

"The weather co-operated and it was definitely a bonus to have that going on in Whistler," Gadsby said.

Some hotels had a similar story. Last weekend, at the culmination of the 10-day festival, the Hilton Whistler Resort & Spa was sold out over a couple of days. A couple of large groups that were here specifically for the festival rented rooms.

"That was very positive for us," said Andrew Glass, Director of Sales and Marketing for the Hilton. "Business was good."

Watermark's president Sue Eckersley complimented not only her crew who put on the festival but also all of the local companies and individuals who stepped up to the plate.

This year more than ever, with so many businesses struggling, Whistler could appreciate importance of the festival for extending the ski season, she said.

"In a season like this, people remember how important it is," Eckersley added.

With several new successful events, such as the Grenade Games and the ThreePointOh Multimedia Challenge, Eckersley said this is a building year.

"I feel like it was a year where we set the foundation to do so much more again," she said.

While pleased to hear about the economic spin-off of the festival to some village businesses, she realizes there are opportunities to share the wealth with all businesses, particularly the pricier restaurants and the retail sector.

"I think there's opportunities there that we're missing," she said.

"They (the festival-goers) have money to spend, they just need to be enticed into those stores."