Understanding the need for electoral reform 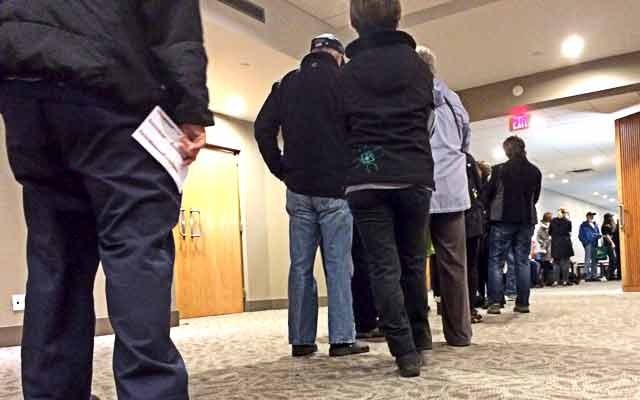 MAKE YOUR VOTE COUNT Whistler voters were met by long lines at advance polls over the Thanksgiving weekend. Electoral reform has been a common topic in this election campaign. Photo BY braden dupuis

At one point or another during Canada's current marathon election campaign, you may have heard a thing or two about electoral reform — proportional representation, mixed member plurality, ranked ballots — but what does it all mean?

The best way to understand these new-fangled types of democracy is to contrast them with the way things are right now, said David Moscrop, a PhD candidate at the University of British Columbia's political science department.

"In the current system, which is called first-past-the-post or single member plurality, whoever gets the most votes wins the seat. It doesn't matter if they have 50 per cent or more. If they have the most, they win," Moscrop said.

The end result is fewer "wasted" votes, increased voter turnout and a Parliament that is truly reflective of the citizenship.

To understand why it's become an election issue this year, one has to look no further than Canada's last election in 2011.

That year, more than 24 million Canadians were registered to vote.

Of those registered, only 14.8 million people cast a ballot — a voter turnout of 61.1 per cent.

Of those who voted, 5.8 million preferred their local Conservative candidate to the alternatives.

And so, with just 39 per cent of the popular vote, Stephen Harper was awarded his first majority government.

"I think the last election, with the Conservatives getting 100 per cent of the power — and pretty much the way that Stephen Harper has used that power — has made people really sit up and take notice," said Kelly Carmichael, executive director for non-profit advocacy group Fair Vote Canada (FVC).

"I think when they start to realize that it doesn't actually have to be that way, people become very engaged."

This year, FVC is on a mission to ensure 2015 is Canada's last unfair election. The group has dispatched volunteers across the country to find out firsthand what each and every candidate thinks. The results can be found online at www.campaign2015.fairvote.ca.

"Some did not answer. We only got a couple of replies from Conservatives," Carmichael said.

"We've been holding town halls also across the country, lots of them on electoral reform, and (Conservatives) are not coming to those either, which is disappointing."

In response to the FVC survey, local candidates Larry Koopman of the NDP and Ken Melamed of the Green Party both said they supported proportional representation, and would advocate and vote for it if elected.

Liberal candidate Pam Goldsmith-Jones said she would advocate for public consultation around the issue, and support reforms that came from any such consultation.

On the national level, the NDP has said it will create an all-party task force to study what mixed-member proportional representation would look like in Canada, with legislation to follow.

The Liberal Party has committed to studying electoral reform, but not to any specific system. However, the party has said 2015 will be the last election using first-past-the-post.

The Green Party supports proportional representation, including a comprehensive overhaul of the Fair Elections Act.

The Conservative Party, in a statement to FVC from Minister of State Pierre Poilievre, said, "the government is not convinced that the introduction of proportional representation will result in a better reflection of the will of voters. The first-past-the-post system has a number of benefits and plays an important role in our system of responsible government."

While some would prefer that things stay the same, Moscrop said the current system is just not representative enough.

"The thing I say to people is, 'If you're really OK with 2.5 out of 10 Canadians of voting age supporting the government, then fine, but don't scream at me that it's the most 'democratic' way to do things," he said.

"Because it's not reflecting a broad sample of the country. Not even close."

And while political discussions often come down to left or right, blue or red, electoral reform in Canada is about more than partisanship, Moscrop said.

"It's not about the system itself, it's about the sorts of outcomes it produces," he said.

"I just want policy outcomes that are more representative and more fair."