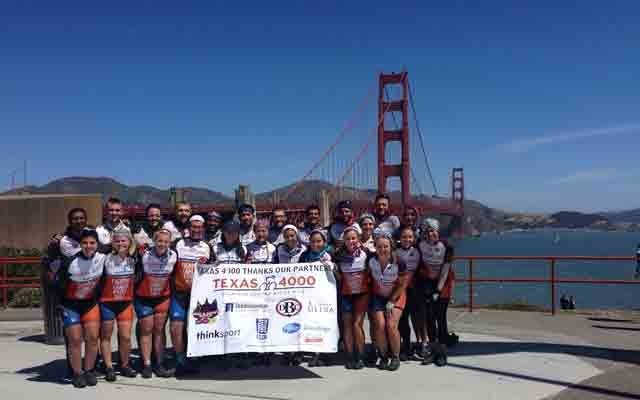 Golden goal A group of University of Texas students, who are biking their way to Alaska to raise funds for cancer research, pose near the Golden Gate Bridge. Photo submitted

Ben Keeler never knew his grandmother — she lost the fight to breast cancer before he was born.

His grandfather, Jimmy Keeler, also lost his life to cancer when Ben was 12 years old.

The stories aren't exactly unique — ask anyone and they'll likely have a similar tale of loss — but they serve as a constant reminder for Keeler and the 78 other students of the University of Texas who are biking their way to Alaska to raise money to fight the disease.

"It's going really well," Keeler said, during a rest day in Vancouver.

"We've been on the road for 46 days now and (we've) got about a little over three weeks left until we hit Alaska."

The ambitious journey is part of a program called Texas 4000 for Cancer — an annual leadership development program that has students raise money for cancer before hitting the road to Alaska.

More than 20 of the students passed through Whistler earlier this week.

"All of our teammates have met or exceeded that goal," Keeler said.

As the students make their way to Alaska along three separate routes, they give presentations in communities along the way focusing on three separate pillars: hope, knowledge and charity.

Hope to keep fighting, knowledge that there is help available to them and charity to make it all happen.

"It's a really powerful way for us to get involved in the fight against cancer," Keeler said.

"We all have loved ones that have been affected by cancer, so it's our way of helping them fight in a little bit of a different way."

While the program is renowned for its contributions to cancer charities, it also looks really good on a resume.

"It gives them a leg up, I think, from their peers that are graduating from university at the same time," said Kathryn Flowers, development and program coordinator with Texas 4000.

"Because the experience is really an 18-month, intensive, leadership-development course basically, so when they graduate from college they not only have a college degree, but also some very real work experience."

During those 18 months, students take away lessons on management, conflict resolution, planning and everything in between.

"I wouldn't be surprised in hearing just about anything that somebody might take away from Texas 4000," Flowers said.

The hardships faced along the way serve as a lesson in their own right: Never give up.

"We wanted to do something that was difficult and that was going to be the biggest challenge of our lives," Keeler said.

"Because we know that every day, no matter what we're facing that day — if it's a strong headwind, if we're climbing mountains, whatever — that's not going to be as hard and as difficult as waking up with a cancer diagnosis, and so we're happy to be getting on the bikes each day and riding for those people who can't ride."