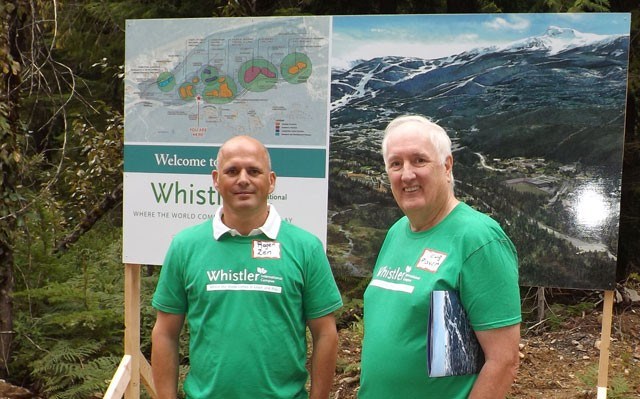 The Zen lands were busy last weekend, with curious visitors checking out the property and enjoying lunch courtesy of proponents lobbying for approval to build a university on the site.

An open house for Whistler International Campus drew 150 people to the property, located across Highway 99 from the entrance to Spring Creek. The Zen lands, or Alpha Lands as they are also known, have been owned by the family of Roger Zen for about 40 years.

Zen was on hand to answer questions. He said the open house was an opportunity to give Whistler a chance to visualize what it might be like to have a university in the resort.

"It was to bring awareness to the community and allow people to come actually on the site and see it for themselves, what the site is all about and what it could look like," said Zen.

Over the many years that his family has owned the land nothing substantial has been done on the property. Zen said a few attempts were made to develop it years ago but no proposals went ahead.

Under the current zoning, only four homes can be built on the 31-hectare (77 acres) site just north of Function Junction. The lowest portion of the property is sensitive wetlands, so the proposed university development is to be built on the upland bench areas. Zen said the university proposal represents an investment of up to $300 million and the funds required to begin building are in place.

"This is all ready to go," said Zen. "We don't need any financing. As soon as we get the go ahead we want to start."

The current plan calls for 30 per cent of the property to be developed with the remaining 70 per cent left pristine. Zen's plans call for university classroom buildings along with staff and student housing to accommodate up to 1,500 students, a residence for the university president, a leadership centre with retreat cabins, a 400-seat lecture theatre and a skating pond.

An environmental research and development area is also proposed at the northern end of Function Junction. In addition to an access to the site across from Spring Creek, the site plan calls for a right in, right out access about half a kilometre north of Spring Creek Drive.

Genevieve Ciebien attended the open house on Saturday, Aug. 17 to learn more about the project.

"The only flag I have raised is the bed units and how does it fit into our overall plan and is that realistic," said Ciebien.

She said she also had concerns about wetland impacts, but after learning about the plans she said the developer has addressed her concern by keeping the development out of the wetland areas. Ciebien added that she's looking forward to learning more and hopes other residents take the time to educate themselves on the proposed university.

The open house hosted by Zen and the backers of the proposed Whistler International Campus came just over a month after the release of a report by Whistler's Task Force on Learning and Education. The task force members came up with 11 recommendations regarding future post-secondary school opportunities in Whistler. It said a number of organizations are interested in partnering with Whistler to offer higher learning in the resort.

The Sauder School of Business at UBC, Capilano University, Emily Carr University of Art + Design, the Vancouver Symphony Orchestra and the Canadian Sport Institute have all expressed interest in bringing advanced learning to Whistler.

Whistler Council intends to use the Task Force on Learning and Education report to help guide future decisions. While Zen is ready to start building, the Resort Municipality of Whistler hasn't committed to initiating a rezoning process for the Zen lands.

The task force recommended that Whistler set a timeframe for identifying five priorities in the next three to five years.