Upcoming weeks ‘critical’ for Whistler to get handle on COVID 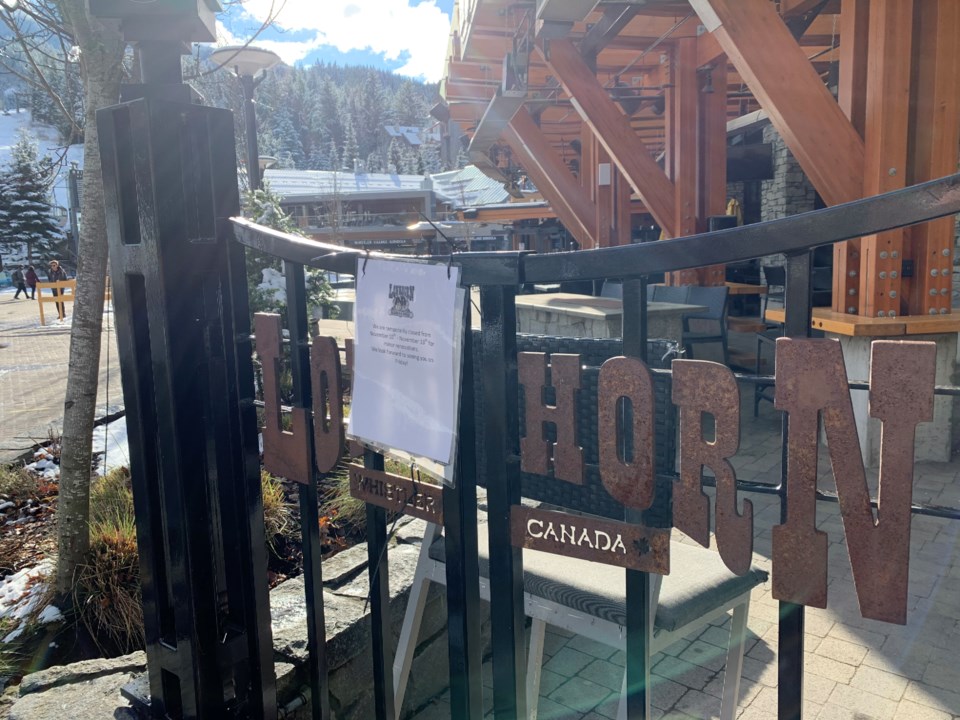 The Longhorn Saloon was listed as a possible COVID exposure site by Vancouver Coastal Health this week, along with two other Whistler establishments. The restaurant was closed Tuesday, Nov. 10, with a notice posted on its gates informing guests that the business would be temporarily shut until Nov. 13 for minor renovations. Photo by Megan Lalonde

Throughout most of the pandemic, Whistler saw relatively few confirmed cases of COVID-19.

But as the temperatures drop and cases skyrocket across the province, the resort is weathering its own spike, casting a shadow over an already uncertain winter.

“We used to have the occasional positive case, and it was kind of newsworthy for us as physicians,” said Dr. Karin Kausky of the Sea to Sky Divisions of Family Practice and Whistler Medical Clinic. “Now, every day we have positives and we’re kind of used to it.”

Whistler’s numbers have followed the wider provincial trend, which Dr. Olivia Bayley of the Whistler Medical Clinic theorized could be linked to private gatherings.

The spike has led local physicians to urge the community to practise the proper health protocols in order to get a handle on rising COVID-19 numbers in the short term.

“It’s a really critical time to pull back and for everybody to focus on the real basics of hand hygiene, self-isolating if you’re at all unwell, and really sticking to the household,” Kausky said. “I think the next couple weeks are really critical.”

COVID-19 testing has ramped up in recent weeks to keep pace, Kausky said, which has added to wait times.

“We’ve also had a massive increase in the amount of testing that we’re doing, which is really difficult in a small community with not a lot of practitioners,” she said. “We’ve gone from testing 15 to 20 people a day to currently testing 60-, 70-plus people.”

Kausky also wanted to clarify some misconceptions around COVID-19 testing and self-isolation. Because the COVID-19 test isn’t failsafe, she said patients should still self-isolate for 14 days if they have been in close contact with an infected individual—generally considered as being within two metres of the person for 15 minutes or more—even if a test comes back negative.

“It doesn’t matter. That full self-isolation still needs to be done,” Kausky said. “The worry is it’s not a perfect test. It can take testing someone two or three times before they test positive.”

Following the appropriate health guidelines is even more essential as Whistler heads into a winter season that is bound to look different than any in recent memory.

“I think there’s the potential for this to really disrupt winter in Whistler, meaning businesses having to shut down temporarily, or you can even imagine the mountain being shut down,” Bayley noted. “For those young people who perhaps don’t know many elderly or vulnerable people in Whistler, maybe that’s not a big worry for them, but the disruption of their work or the ski season would be a big worry for them.”

On Monday, Nov. 9, Fresh St. Market announced it had reopened after closing the previous night. That evening, the store became aware of an employee who tested positive, leading to the closure. According to a statement, the company hired a third-party service for “thorough deep cleaning and sanitation overnight.”

As part of its public employee case list available online, Loblaw, the parent company of Shoppers Drug Mart, reported that three staff members from its village store have tested positive on presumptive COVID-19 tests. The employees last worked at the store on Oct. 28 and 31.

Loblaw said it is choosing to share updates about positive COVID-19 test results among its staff in order to maintain transparency.

“In these cases, we work closely with public health and follow their guidance to ensure proper notification of close contacts and required cleaning and sanitization in our stores,” the company noted on its website.

The Fairmont Chateau Whistler announced on Wednesday, Nov. 11 that four employees are now in self-isolation since testing positive for COVID-19. Health officials consider the risk of transmission to be low.

"We had already implemented measures at the hotel to minimize risk of transmission, including physical distancing; mandatory screening for all guests and employees; face coverings mandated for all employees and guests in all indoor public spaces; increased frequency of cleaning and disinfecting, with a focus on high-touchpoints; and continued use of disinfecting chemicals proven effective in preventing the spread of COVID-19, along with other viruses and contagions," the hotel said in a statement. "We remain committed to ensuring the health and wellbeing of our guests, employees and community, and will take all necessary steps to provide a safe environment at the hotel."

Cornucopia, Whistler’s annual celebration of food and drink, announced this weekend it would be postponing the festival for two weeks in response to the new provincial health orders announced on Saturday, Nov. 7. Organizers are offering refunds to any ticket buyer who requests them, but are hopeful to resume the event at the end of the month (for more on this story see page 44).

While a spokesperson for Earls referred Pique’s questions to VCH, a post Monday on Earls Whistler’s Instagram page said the restaurant was closing until Nov. 16 in light of the “recent increase in positive cases affecting everyone in our community, and for the safety of our guests and employees.”

Earlier that day, VCH had listed Earls Whistler as a public exposure site. The agency lists the possible exposure period as operating hours between Oct. 31 and Nov. 6.

Buffalo Bills, owned by Gibbons Whistler, was also listed as an exposure site, with possible exposure noted as being during operating hours on Halloween, Oct. 31.

Both exposures are listed as low-risk.

Longhorn Saloon, also owned by Gibbons Whistler, is closed until Nov. 13, which a company spokesperson said was due to planned renovations. A Longhorn employee, who wished to stay anonymous, told Pique they were informed staff members had tested positive, prompting the closure.

Pique sought clarification and a spokesperson said that the company had encouraged staff to “take this time to self isolate and take a break as we prepare for the winter,” while the renovations were carried out.

“We have had positive cases within the Gibbons Whistler team throughout this pandemic, and we have been working with Vancouver Coastal Health on each individual case as well as following the proper contact tracing protocols. The Longhorn Saloon is closed due to renovations at this time.”

As Pique was heading to press Tuesday night, VCH added the Longhorn to its list of public exposure sites, with the potential exposure time listed as the evening hours of Oct. 31.

(On Saturday, Nov. 14, Gibbons Whistler announced it decided to press pause on dine-in service throughout the company's Whistler venues in preparation for the ski season. Takeout & delivery is still available.)

Mexican Corner will remain closed until Friday as well after an employee tested positive, said owner Pepe Barajas, who is hopeful his restaurant’s experience can help other local businesses navigate COVID-19.

“This could be a good example to have some protocols in place, not to panic and how to act responsibly,” he said. “If another business experiences this, we could support them to show the right way to proceed. This is how we’re going to keep our community safe.”

There’s no denying Whistler and B.C.’s restaurant sector has a tough road ahead. The industry can’t afford another health order closing or limiting restaurants to takeout and delivery for an extended period, warned Ian Tostenson, president of the BC Restaurant & Foodservices Association (BCRFA).

“If it was prolonged, it would kill the industry,” he said. “If we just have to do this for two weeks, we’ll find a way. The difference is that we’re much better and more prepared as an industry to do takeout and delivery than we were in the spring, but takeout and delivery, you can’t make a living with.”

Acknowledging the challenges health officials have faced so far, Barajas echoed what Tostenson and others in the industry have already voiced, urging decision-makers to take a longer view of the potential impacts COVID restrictions can have on the economy and social well-being of British Columbians.

“I think our top priority should be safety and health of citizens and residents, but what I am concerned with is that decisions are being taken without any evidence that those decisions will lead to combating COVID cases,” said Barajas, pointing specifically to the province’s decision to cut off liquor sales at 10 p.m.

“What was shocking to me is we are required to have Serving it Right, so we already know that we cannot serve people who are intoxicated or are behaving in an improper manner.

“Are the side effects worse than the actual remedy?”

Adding to the hurdles restaurants are facing is the lack of clarity around B.C.’s recent restrictions on social gatherings. Despite the fact that order doesn’t apply to restaurants and bars, Tostenson said the confusion has already been sown in the public.

“They’ve got to watch their definitions,” he said of the government. “I do worry that every time this happens—and we know this for a fact—people cancel their reservations. It takes us days, if not weeks, to undo some of this messaging.”

COVID-19 has only compounded the staffing shortages B.C.’s restaurant sector was already experiencing before the pandemic, a problem that seems even worse in Whistler, where more than two-thirds of businesses with 50 employees or more recently reported they won’t have enough staff this winter.

“We’re starting to see it in the Okanagan and we’ve heard about it in Whistler,” Tostenson said. “We’ve lost a lot of people who won’t go back to the restaurant industry after this, and that’s just going to exacerbate the shortage we had prior to all this.”

A February report from the BCRFA predicted the province would come up short on skilled restaurant labour by 514,000 workers over the next decade.

-With files from Lindsay William-Ross / Vancouver is Awesome