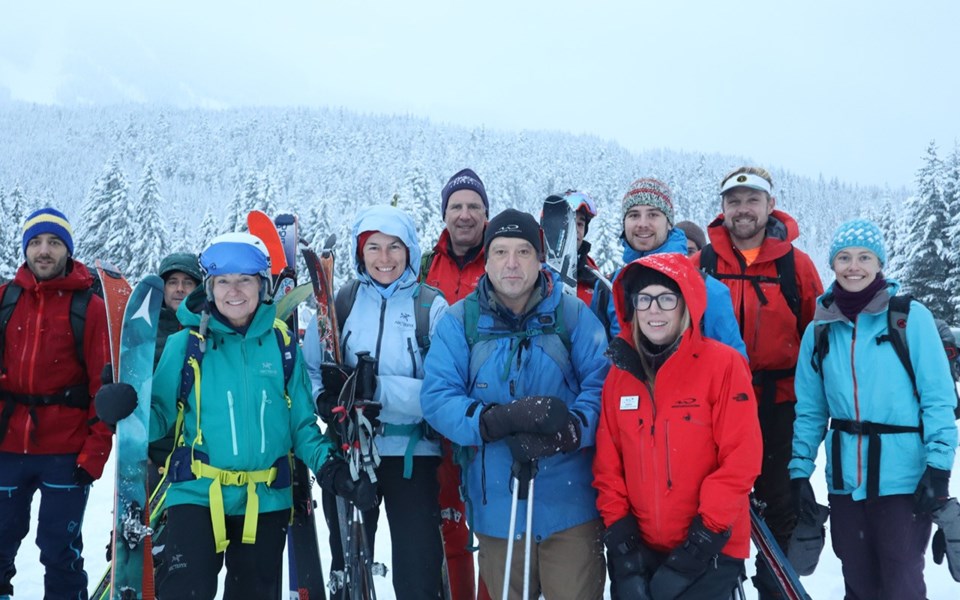 ALL IN A group of 20 uphill skiers were led up Blackcomb terrain to Garibaldi Park by two Whistler Blackcomb ski patrol members on Sunday, Jan. 12, in a mission that was meant to 'ground truth' an uphill ski route on the mountain. Photo by Joel Barde

"[Whistler Blackcomb] was totally great," said Bill Maurer, a BC Mountaineering Club (BCMC) director who has been advocating for an uphill skiing corridor (both publicly and behind the scenes) for the past year. Maurer added that the event, which took place on Sunday, Jan. 12, was "very much a collaborative process" and that WB selected the final route after he sent along a suggested one.

Under the terms of its 2017 Blackcomb Master Development Agreement, WB is required to commit to working towards establishing year-round, non-motorized public access to Garibaldi Provincial Park.

But a route has never been established, with Whistler Blackcomb as recently as December 2019 citing safety concerns from having uphill skiers utilizing the same (often busy) terrain as downhill skiers.

Sarah McCullough, director of government and community relations for WB, said Sunday's trip was about gathering direct experience, which will inform future decision-making and protocol.

"We wanted to ground truth issues on safety, operational considerations, and particularly the time that people would be uphill skiing on downhill runs," said McCullough.

"We do still know that uphill skiing on a route like Sunset Boulevard can create some issues, where uphill and downhill traffic won't be able to see each other, so that's why we had our ski patrol [accompany the group] on Sunday, to not only ensure they were safe, but also to help us understand on-the-ground issues."

The ski tourers, around 20 in all, skinned up Home Run, Shorthorn, Gondola Road, and Sunset Boulevard, before entering into Garibaldi Park, where they skinned to the top of Disease Ridge before turning around and skiing back to Base 2 via Blackcomb terrain.

The group was accompanied by two WB ski patrol and met briefly with Adam Mercer, patrol director for WB, prior to setting off.

McCullough, who also met the group, said that she was happy to be working collaboratively with Maurer on the issues at play.

"What I'm super happy about is that we're in a dialogue where we are talking to one another about each others' insights," she said. "We know that finding long-term solutions to these kind of issues will require that we collaborate and cooperate and there's effort from all parties."

Maurer said he would like to see a few more escorted trips take place in 2020, with a long-term goal of establishing a permanent uphill skiing corridor that won't require an escort.

McCullough added that the next step would be to debrief with resort stakeholders and learn from Sunday's event.

The potential creation of a backcountry corridor starting at the base of Blackcomb could have major implications for WB, especially given the growing popularity of ski touring and walk-up day ticket prices that can approach $200 in peak season.

WB is not currently looking at an uphill skiing pay structure, McCullough clarified in a follow-up email.

Vancouver resident Silke Gumplinger, who is not a WB pass holder, was among the group of ski-tourers to take part in the tour.

"In Germany, everybody's skinning up the ski slopes. It's just the normal thing to do," she said.

"If the avalanche danger is kind of high and the conditions are not great, people are skinning up the [in-bound] ski slopes."

Gumplinger added that it is important to have convenient access to Garibaldi Park, adding that from her understanding the BCMC was "quite instrumental" in establishing it as a provincial park.

"The BCMC, I understand, was quite instrumental in years past to get Garibaldi Park established, so I think it's good for the BCMC to try and push for a backcountry access to the Blackcomb side as well," she said.

For the time being, uphill skiing remains prohibited on Whistler and Blackcomb ski runs.

Not cooperating with patrol operations or safety requirements or requests may impact pass priveleges, according to WB.

People looking to tour up to Garibaldi Park from the base area can, however, do so via the Singing Pass trail.

"I would also just ask people in general who want to access the backcountry that they review the Whistler Blackcomb website, and take a look at the information that's on that site, so they know what are the rules that they should be following," said McCullough.