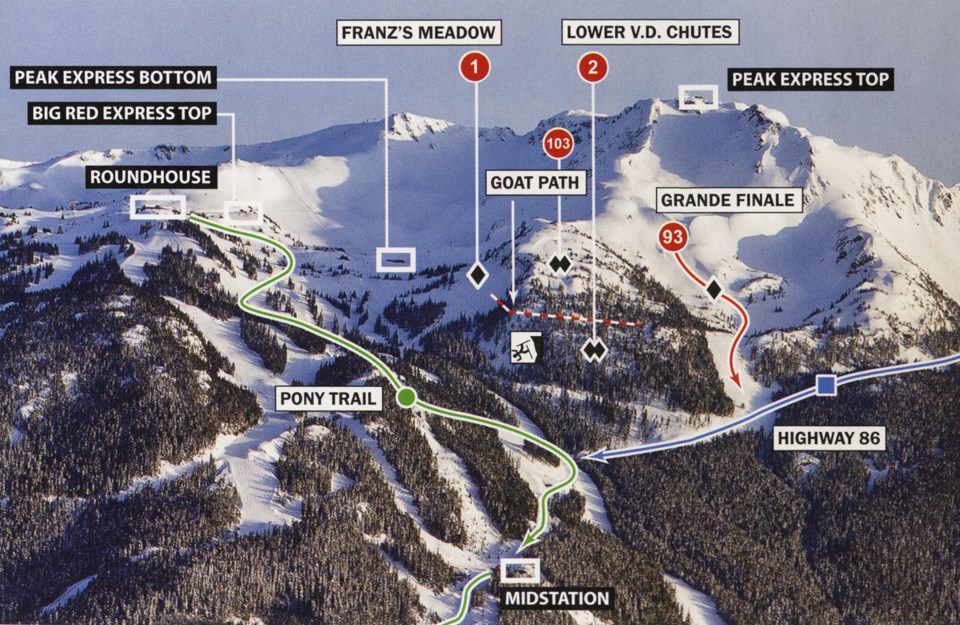 CLIFF DANGER Cliff icon at the bottom of Goat Path on this published map shows the location of known cliffs in the area of Franz's Meadow. Early information suggests the U.S. skier fell to his death off cliffs above Goat Path and into Franz's Meadow. Quickdraw Publications; Ski and Snowboard Guide to Whistler Blackcomb by Brian Finestone and Kevin Hodder

A 43-year-old American man died on Whistler Mountain this week after falling from a cliff above Franz's Meadows.

Whistler RCMP said Sean Lawrence Miller of Norman, Oklahoma was found under a roughly 70-foot cliff on Monday Jan. 7. He was described as " an experienced skier."

Whistler Blackcomb would not confirm the exact location but early information points to the cliffs in the area above Goat Path.

"There were some cautionary warning signs but it's not a closed area," said Sgt. Rob Knapton from the Whistler RCMP.

When asked if Whistler Blackcomb would be make any safety changes to the areas, company officials were unable to comment before press time.

Miller appeared to be skiing by himself and was vacationing in Whistler alone.

A statement from Whistler Blackcomb said:

"Whistler Blackcomb's Critical Incident Team is providing support to those involved and wishes to express its sincere condolences to the family and friends for this sad loss."

A passing skier called to the man around 10 a.m. Monday and when he failed to respond, the skier called ski patrol.

"Attempts were made to treat the male by ski patrol and physicians at the scene, however, they were unable to revive the male," said Knapton.

"From the male's injuries and the location of the body, it appears that the male fell from the cliff area above Franz's Meadows."

Whistler RCMP is no longer investigating but the B.C. Coroners Service continues its investigation to determine exactly what happened.