U.S. visits may drop another 15 per cent 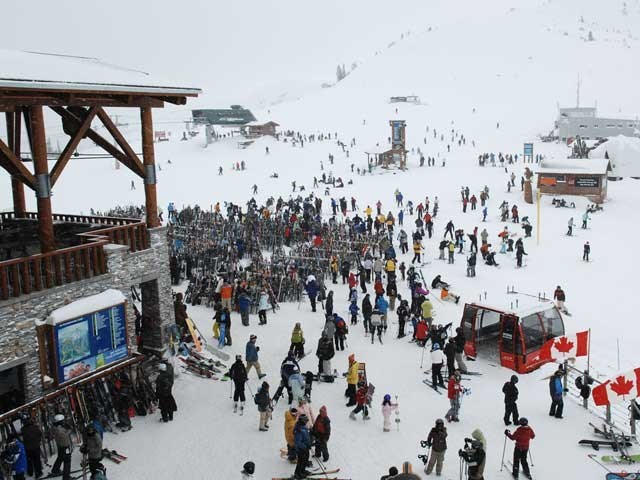 Skier Visits A decline in U.S. and U.K. visitors is being forecasted for this season, but Tourism Whistler is optimistic that losses can be offset by targeting our regional market. Photo by Scott Brammer, www.coastphoto.com

While the actual size and scope of the U.S. economic meltdown is being debated on Wall Street, there is a general agreement among economists that the U.S. is, at minimum, heading into a serious recession, no matter how big the government rescue/bailout.

What it means for Whistler, which relies heavily on visitors from the U.S., is unknown, but Tourism Whistler and its partners are not taking any chances.

“If you look at what’s going on in the States right now, which is one of the issues we’ve been watching and monitoring for a number of years, and the softness in the economy… I feel good about the fact that we have long and mid-term strategies,” said Breton Murphy, manager of corporate and member communications for Tourism Whistler. “We’re somewhat prepared for that kind of volatility, but also dynamic enough to say, okay, this is the new reality, what can we be doing in the shorter term?”

Last winter, 2007-08, Whistler saw an overall decline in U.S. visitors of roughly 15 per cent over the previous winter. Tourism Whistler has not completed its forecast for this coming winter, but Murphy says declines could be 15 per cent once again.

While other markets picked up the slack last year, especially the U.K. and Australia, Murphy says we can’t count on visitors from Europe, with the British pound losing traction and similar economic concerns building across the Atlantic.

This week, Dutch bank Fortis had to be nationalized to prevent its collapse.

While the economy may look bleak, Murphy says Tourism Whistler is still optimistic that they will see some growth in the regional market, B.C. and Washington state, as well as some growth or stability in the domestic market as the dollar drops and fewer Canadians travel abroad on vacations. Visits from Ontario are expected to drop, with problems in manufacturing industries and Bay Street financial district, but Murphy says that generally Canadians choose to vacation at home during periods of recession.

He also says that the latest crisis has not caught Whistler unprepared.

In the last seven years the resort has weathered the impacts of the 9/11 terrorist attacks and the resulting recession, a surging Canadian dollar, rising fuel prices, new passport requirements, airline failures and price hikes, one of the worst winters on record ( 2004-05), the wettest and coldest summer in decades (2007), highway closures and more.

“Never underestimate the power of this resort and our membership to respond,” said Murphy. There is an all-members meeting on Oct. 9 to discuss the upcoming winter season. Whistler businesses have already responded with new deals and packages, like Book Early and Save, and a deal that would give visitors two nights and two days skiing for under $200, or four nights for under $400.

That value extends to the luxury market as well, says Murphy, which is part of the reason why Whistler has been able to buck national trends in recent years and increase visitor numbers from year to year. For example, 2007 was the busiest summer on record, coming after a winter season where the resort broke two million skier visits for the first time in five years.

The resort also has a few aces up its sleeve for the coming winter, including the opening of the Peak 2 Peak Gondola, Olympic test events at all of the venues, the Squamish-Lil’wat Cultural Centre, and events like the World Press Briefing that will draw media from around the world to scout out Whistler before the Games.

However, one of Whistler’s biggest assets, says Murphy, is its reputation.

“When we look at visitation, we did a survey last winter and found that 58 per cent of our visitors were repeat visitors,” said Murphy. “That speaks to a visitor who has experienced the resort and said ‘I want to go back because it delivered on the promise of a great experience and great value.’”

While Washington state was rocked recently with the collapse of Seattle-based Washington Mutual — the largest bank failure in U.S. history until Wachovia went under two days later — Murphy says the research shows that people will still travel. Both banks were purchased by other companies, and the initial panic has subsided now that people know their savings are secure.

“They’re not getting on planes, but it’s still an opportunity because of our proximity and the fact that people are vacationing closer to home,” he said. “The tendency is not to not travel, but to adjust travel for shorter stays, maybe spending less on food and beverages, but they’re still coming.”

The regional market could also see a boost as gas prices decline from record highs, says Murphy, and as the Canadian dollar drops from a high of $1.10 last winter to the current U.S. exchange rate of $0.94.

Some initiatives that gave been underway for several years, including attracting more new immigrants to the Lower Mainland that don’t typically ski or snowboard, could also provide new customers.

Whistler is also hoping to buck a trend where visitor numbers to a destination drop off before an Olympics, partly because visitors believe the hosts will be busy with construction. Murphy says they have worked to get the message out that all of the Olympic venues are complete.

“We look closely at the profile and impact of the value offers we’ve had in the past, look at what has worked, and invest in those markets very specifically,” said Murphy. “We’ll continue to promote initiatives, but we will also be marketing in a very targeted way to get the most bang for our buck, so to speak. Different messages appeal to different markets, and for our regional market that might be the two nights for under $200 offer.”

Tourism B.C. does not forecast visitors, but collects reports from its member organizations to determine trends in the industry. As a result, a spokesperson said that their reporting is not fast enough to properly account for events like the banking crisis.

While visitor numbers were down across the board, increases were noted for Hong Kong, Australia, China, New Zealand, South East Asia, and parts of Europe like France, Italy and the Nordic countries of Norway, Finland and Sweden. Mexico was also up almost eight per cent.

Taken together, total overnight visitation in the first seven months of 2008 is down 5.9 per cent for the province and 4.0 per cent nationally.