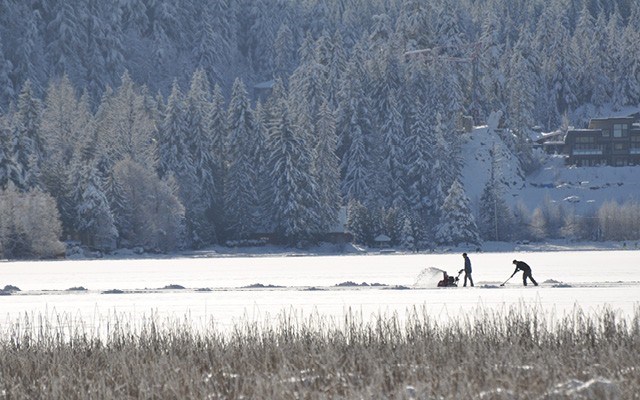 USER BEWARE Two people build an outdoor rink with a snowblower on Alta Lake not long before a Ladner man fell through the ice. photo by juste dupuis

The Ladner resident was tobogganing near Lakeside Park with his 10-year-old son when the pair decided to follow the lead of some outdoor-rink builders and walk out onto Alta Lake.

But the thick ice that was able to support two rink builders with a shovel and a snowblower wasn't consistent across the entire lake.

"There wasn't a whole bunch of cracking, so (I didn't have) any indication that something was going to happen. I literally just went straight through," Visscher said.

Visscher stayed calm, directed his son to carefully leave the ice surface, and was eventually able to pull himself from the lake after making it to a thicker patch of ice.

It was on the cold trek home, after pulling himself from the frozen water, that Visscher's son pointed out the Tough Mudder parallel.

"He said 'It's a good thing you've done all those Tough Mudders and that Arctic Enema dad, because now you could handle this,'" Visscher recalled, referencing the sub-arctic water obstacle included in Tough Mudder events.

"That's exactly what it felt like... The first hit of it absolutely took my breath away. Just knocked it clean out of me."

After drying off and warming up, Visscher was able to laugh about his experience, but the seriousness of the situation is not lost on him.

"I kind of had a little mental plan in my head, and 90 per cent of me knew what I needed to do," he said. "But as the ice kept breaking, there was a tiny, small part of me that thought, 'oh, I wonder if my son is going to watch his dad die today.'"

The Whistler Fire Rescue Service (WFRS) is equipped to do ice rescues, but when freezing water is involved it's never an ideal situation, said WFRS Chief Geoff Playfair.

"The bottom line is that time is of the essence, and by the time we are able to activate and respond it may be too late for somebody," Playfair said.

"So really the thing is for them to prevent themselves going through in the first place."

There are many factors that contribute to the thickness of the ice, including depth, size of the body of water, currents and tides, fluctuations in water levels and even changing air temperatures.

"Look around as you're moving around the lake, keep an eye open for any weak spots in the ice, any indications, or even known weak spots," Playfair said.

"If you've lived in the area for awhile you probably know where the creek inlets are, and where you know that that creek is going to create some movement in the water, it's not going to freeze as easily or readily, and won't be as thick as the rest of the ice around it."

It's also important to keep an eye on pets around the lakes, Playfair said.

The Resort Municipality of Whistler does not monitor ice thickness, but the Canadian Red Cross recommends 15-centimetre ice thickness for a single skater, 20 cm for a group of skaters and 25 cm for snowmobiles.

That being said, the WFRS itself does not provide a universal ice-thickness when it comes to safety.

"We don't give out a thickness of ice that's safe, because of course that is all subject to quality of the ice," Playfair said.

"So it's a matter of user beware."