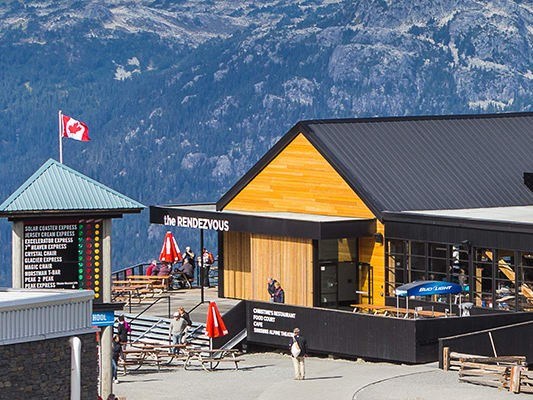 The Rendezvous Lodge atop Blackcomb Mountain is slated for the addition of 250 seats, expected in time for the 2020-2021 ski season. Photo by Brad Kasselman of Coast Mountain Photography / Courtesy of Whistler Blackcomb

The plans include the addition of 250 seats and related facility upgrades, according to Marc Riddell, West Coast director of communications for Vail Resorts.

The Rendezvous’ current capacity is 734, and the expansion will increase its seating by roughly 34 per cent.

Riddell said the additions are meant to reduce congestion at the mountain-top restaurant.

"Anyone who has been up the mountain [knows] that we sometimes do have overcrowding issues at our food and beverage locations. It’s also a good way for us to be able to improve what we have on Blackcomb, and then also to be able to hopefully split the crowds on [Whistler and Blackcomb] mountains,” he added.

The expansion is expected to be done in time for the 2020-2021 winter season.

Whistler Blackcomb last renovated the Rendezvous in 2015, increasing its seating capacity by 8.5 per cent, part of $5.8 million in upgrades to the restaurant.

The upcoming expansion is part of Vail Resorts’ 2020 capital plans, estimated at between US$210 million and US$215 million. That’s in addition to the approximately US$190 million to US$195 million the ski giant has slated to spend on capital improvement projects across its roster of resorts this year.