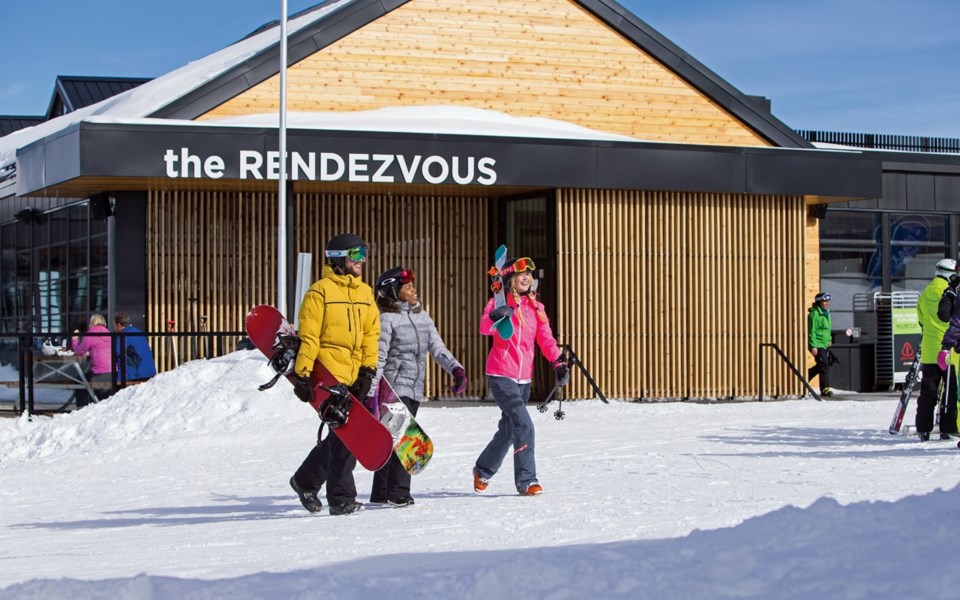 seeding seating The Rendezvous Lodge, last renovated in 2015, is set for an expansion next year, when 250 seats will be added to the restaurant. Photo by paul morrison / courtesy of wB

The plans include the addition of 250 seats and related facility upgrades, increasing the restaurant's current capacity by roughly 34 per cent.

In an interview, Whistler Blackcomb's (WB) new COO Geoff Buchheister said that increasing capacity across the resort's facilities is a "strategic focus" for the company.

The additional seating is expected to be done in time for the 2020-2021 winter season.

WB last renovated the Rendezvous in 2015, prior to Vail Resorts' takeover, which increased its seating capacity by 8.5 per cent, part of $5.8 million in upgrades to the restaurant.

The upcoming expansion is part of Vail Resorts' 2020 capital plans, estimated at between US$210 million and US$215 million.

Hundreds of local business leaders got a closer look this week at a Vail Resorts' initiative dedicated to promoting diversity that was inspired by a similar program at Whistler Blackcomb.

POWDER (Providing Opportunity for Women through Diversity, Equality and Respect) was launched last year, with plans to roll out the program across all of Vail Resorts' properties. The program was modelled after Women of Whistler Blackcomb, which began in 2015 when women leaders from every division of the company came together to ask how they could better foster a culture of equality. This led to a shift in how WB considered everything from its hiring practices to scheduling, career development and advocacy to education.

"POWDER is about creating opportunities, it's about inclusivity, it's about diversity, it's about conversations and having dialogue, and through that, creating stronger, better, more diverse teams," explained Kate Roddick, WB's manager of internal communications and POWDER co-leader. "It's something all of us can benefit from."

The program features internal events, such as a recent talk on "mindful communication," that each of WB's divisions are invited to. A series of six events is also being planned into next year in different regions where Vail Resorts operates. The goal is to expand the program to offer diversity-focused events in the wider resort community as well.

Initially, POWDER will remain focused on gender inclusivity, with plans to broaden its reach over the next three to five years "for inclusivity and diversity across the board," said POWDER co-leader and WB senior leadership member Miriam Macdonald.

Asked how the company intends to drive diversity in an industry that has, historically, primarily attracted a mostly white, upper-class demographic, WB COO Buchheister said while Vail Resorts' international programs "might not always bring ethnic diversity," they attract "diversity and different thought processes" in other ways.

"I think the approach is to be open and inclusive and also to be strategic about people who may want to be in this industry, and certainly at [a specific] time of their life," he added. "You're thinking about a younger demographic who want to come up. Maybe they're finished their high school and want to see what's out there in the world, and this is a great place to do it."

Riddell also pointed to a Vail Resorts' initiative, underpinned by a US$10-million donation over five years by company CEO Rob Katz and his wife, bestselling author Elana Amsterdam, to improve access to skiing and riding for underserved youth in urban areas such as Vancouver, New York, Philadelphia, Boston and Seattle.

"We understand we have a diversity issue in this industry, and we understand that it's stagnant in terms of growth, so we want to open opportunities for people from communities that may not necessarily come up to the mountains or think about a career in the mountains," Riddell said.

Three Whistler organizations were announced as the latest recipients of grant funding from the Katz Amsterdam Foundation, founded by Vail Resorts CEO Rob Katz and his wife, Elana Amsterdam.

Part of the more than US$2.8 million in grants the foundation will hand out this year, the Whistler Blackcomb Foundation, the Whistler Community Services Society (WCSS) and the Whistler Learning Centre will receive CAD$130,000, $120,000 and $103,270, respectively.

The Whistler Blackcomb Foundation, which works in conjunction with the foundation to determine grant recipients, will use the funds to help identify and fill gaps in local behavioural health programs and services.

At WCSS, the money will go towards bringing together key leaders to help launch a "crisis stabilization team" in Whistler.

The funds for the Whistler Learning Centre, meanwhile, will support its plans to expand First Nations programming, including life-skills training and peer support groups, that will be developed with members of the Lil'wat Nation. The funds will also help the learning centre, alongside its partner, the BC Institute of Technology, to apply for federal grants to build a national excellence centre that will "train First Nations therapists in Whistler in the kind of advanced therapies that I and other psychologists practise," explained Dr. Stephen Milstein, board chair at the Whistler Learning Centre.

The Sea to Sky Community Services Society, one of 40 non-profit grant recipients across North America this round, will also receive $75,000 from the foundation to support youth behavioural health services at the new Squamish Youth Resource Centre.

The continued push of Vail Resorts' suite of passes is paying off for the Colorado ski giant, according to a first-quarter earnings report this week.

In its earnings call on Monday, Dec. 9, the company reported a 17-per-cent bump in season pass sales dollars along with a 22-per-cent increase in units compared to the same period last year, ending Dec. 2.

'We are very pleased to see strong sales growth in our season-pass program that exceeded our expectations," said CEO Katz on the conference call.

"Our local markets continue to show solid overall growth, driven by favourable results among our local guests in the Whistler Blackcomb region, with particular strength in Seattle from the first full pass sales season with access to Stevens Pass."

Katz added that the majority of sales growth stems fro the company's Epic and Epic Local pass products, "where we saw solid growth in new pass holders and renewing pass holders, with less trade down to Epic Day Pass then we were expecting."

Katz also acknowledged the poor weather conditions at Whistler Blackcomb to start the season, calling them "more challenging that probably anywhere else in our network."

"The data points on Whistler generally look fine, largely in line with what we would expect, but obviously, in part, some of our resorts will depend of course upon the actual conditions when people come for the holidays and beyond," he added. "I think one of the good things about Whistler is that you obviously have a lot of people who book with longer lead times, and so long as conditions come before the holidays, I think that still gives us a good opportunity to essentially have a strong holiday period."

Net loss attributable to the company was US$106.5 million for the first fiscal quarter of 2020, compared to a net loss of $107.8 million in the same period last year. Quarterly losses included approximately $6.8 million in acquisition- and integration-related expenses as well as roughly $1 million of "unfavourable foreign exchange as a result of the U.S. dollar strengthening" over the past year compared to the Australian dollar, where the company operates three resorts.

"Our first fiscal quarter historically operates at a loss, given that our North American mountain resorts are generally not open for ski season operations during the period," Katz said. "The quarter's results are primarily driven by winter operating results from our Australian resorts and our North American resorts' summer activities, dining, retail/rental and lodging operations, and administrative expenses."