Vancouver Board Of Trade to honour Whistler Blackcomb, Audain family

WB, Audain and wife Yoshi Kurosawa will be recognized for their philanthropic efforts
Nov 2, 2016 6:00 PM By: Brandon Barrett 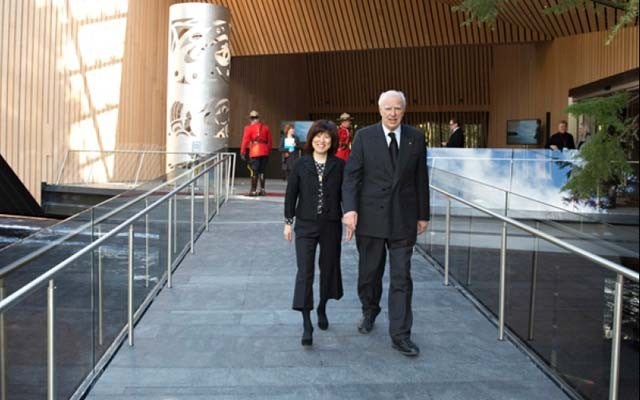 TOP HONOURS Michael Audain and Yoshi Karasawa will be the first couple to receive the Rix Award for Engaged Community Citizenship next year. File photo by David Buzzard / <a href="http://www.media-centre.ca">www.media-centre.ca</a>

The Greater Vancouver Board of Trade will honour two of the most recognizable names in Whistler next year, Whistler Blackcomb (WB) and Michael Audain.

In an announcement last week, the trade organization revealed that ski industry giant WB will receive the 2017 Rix Award for Engaged Corporate Citizenship "in recognition of the company's commitment to excellence for its customers, its efforts to foster a positive work environment for its employees, its environmental initiatives, and its dedication to the local community and making Whistler a great place to live and work," according to an Oct. 27 release.

"Our organization believes that it is as important to make Whistler a great place to live and work as it is to make it a great place to visit," said Dave Brownlie, CEO of Whistler Blackcomb, in an emailed statement. "This recognition is meaningful as it acknowledges our commitment to our people, our guests, our community, and the environment on which our business depends."

Real estate mogul and founder of the Audain Art Museum, Audain will be honoured alongside his wife, Yoshi Karasawa, with the 2017 Rix Award for Engaged Community Citizenship "for their community leadership, generosity, and unparalleled passion for the arts." It's the first time the award will be presented to a couple.

"I'm delighted that Yoshi is part of the team being awarded because over the years, I wouldn't have done very much without her support and enthusiasm," Audain said.

The Whistler Blackcomb Foundation has donated over $10 million to non-profits, health care and community initiatives throughout the Sea to Sky, and also matches employee donations dollar for dollar to its Envirofund. Since 2001, the fund has raised over $400,000 for more than 90 local environmental projects.

The trade board also recognized WB's commitment "to reducing the environmental footprint of its operations to zero one day." In recent years, the company has increased its focus on energy conservation, waste management and raising awareness of environmental issues among guests and staff. The Fitzsimmons Creek Renewable Energy Project, a run-of-river power-generating facility between Whistler and Blackcomb Mountains, now returns as much power to the grid as is consumed annually by WB's operations.

The chairman of Polygon Homes Ltd., Audain is also a fervent supporter of British Columbian and Canadian art, serving as chair of the Vancouver Art Gallery and the National Gallery of Canada. He currently sits as chair of the Audain Art Museum, which opened its doors in Whistler in March, the Grizzly Bear Foundation and the Audain Foundation, which supports the visual arts at major galleries and educational institutes. The Audain family has donated over $100 million through the foundation.

The philanthropist said he was happy to be sharing the stage with Whistler Blackcomb.

"Certainly all the support we've had from Whistler Blackcomb in marketing the (Audain) Museum has been absolutely tremendous and they've been a very supportive party to us in rounding out Whistler's appeal on the world stage," Audain said. "We wouldn't be coming to the attention of many people without the connection with Whistler."

The 2017 Rix Awards will be presented at the 30th Annual Governors' Banquet on April 3, 2017 at the Vancouver Convention Centre.