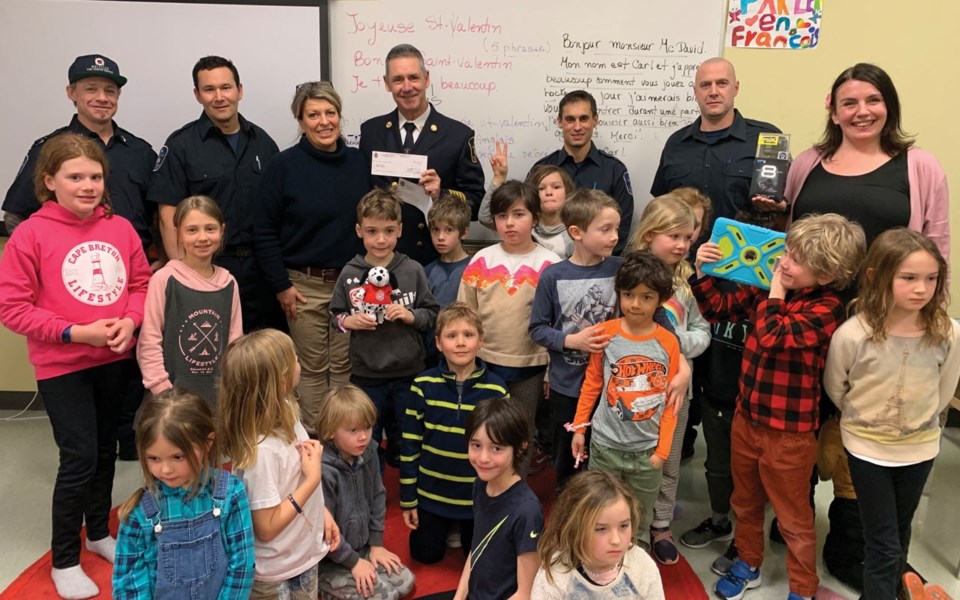 Students at École La Passerelle were bubbling with excitement last Thursday, Feb 13, as Whistler's fire chief and a group of firefighters visited the school to present a host of prizes for the students' winning submission to the Fire Prevention Week 2019 video contest.

In front of a room full of students, Whistler Fire Rescue Service chief John McKearney distributed the prizes, which included a new GoPro camera, a stuffed animal (to serve as the school's "new mascot," joked McKearney), as well as a cheque for $1,000 towards the school. The school will also be given $100 towards a pizza party.

In his short speech, McKearney said that the selection panel was struck by the creative thinking that went into the video.

"This young group here put on a video that was really well done, and really captured the hearts and minds of the panel," said McKearney. "They nailed it ... This school and class is really plugged into [the fire-safety message]."

Not Every Hero Wears a Cape, delivers important advice on topics such as planning escape routes from every room in your home and steering clear of dangerous items (dynamite, cigarettes, and stoves).

The advice is narrated over drawings by the students.

The video was produced by the school's first and second grades, with additional support from Anika Bougie (Grade 5), Annabel Maclennan (Grade 5), and Cedric Smerychynski (Grade 6).

André Morin, a special education assistant at École La Passerelle, said that she was thrilled with the results of the students' hard work adding that a lot of the ideas included in the video resulted from the drawings that students produced.

A former professional videographer herself, Morin explained that she worked closely with student Orson Graebling.

"He's really, really creative," she said. "He loves doing arts and crafts, so I [figured] this would translate really well."

While nothing is set in stone, École La Passerelle has a popular new robotics program, and Morin said that the $1,000 may be put towards that.

"We're using Legos and turning them into motor vehicles and the kids are loving it, so some of the kids are saying we should buy material for [the robotics program]," said Morin.

Asked about the end-goal for the video contest, McKearney put it simply: "To inspire young people to have top of mind being fire smart [and think] in terms of fire safety."