VIDEO: How to be a good ecocitizen 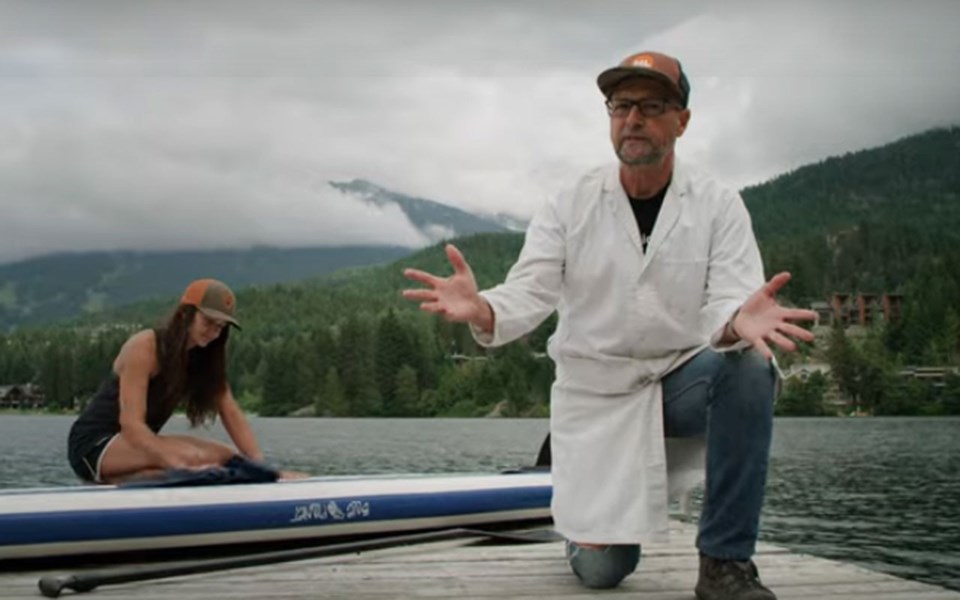 Invasivologist (and Pique columnist) Leslie Anthony is just one of several Whistler locals to cameo in a new video produced by AWARE in conjunction with Switchback Entertainment. Screenshot

AS WHISTLER has seen record-breaking visitation in recent years, the concern around the impact to the environment has been well noted.

But how do you tell people about the multitude of issues affecting Whistler's environment—things like proper backcountry etiquette, invasive species, wildfire prevention and bear safety—when they may only be here for a few days, or months?

"Those were our concerns—how do we just get the message out to people who are coming here, how do we do that in an engaging and a fun way that's in line with who we are as Whistlerites, but also will hopefully help protect some of these things that we value?" said Claire Ruddy, executive director of the Association of Whistler Area Residents for the Environment (AWARE).

With the help of filmmaker Mike Douglas and his team at Switchback Entertainment, AWARE put together a seven-minute video jam packed with information that manages to hit all the right notes.

And with Tourism Whistler onboard, the hope is its messages will spread far and wide (you can watch for yourself at awarewhistler.org/ecocitizen).

"The hardest thing with these sorts of videos is making them interesting enough so people will watch them," Douglas said, adding that he drew inspiration from some funny and entertaining safety videos produced by Air New Zealand.

"We set out to bring that same feel to this series."

Over seven minutes, the video covers topics like littering, waste sorting, reusable bags and bottles, invasive species, rock stacking and land disruption (to name just a few), and it does it in a way that is both charming and memorable.

Whistler locals populate the background as the video seamlessly transitions from one instantly recognizable locale to another, sourced from all around the valley.

"Writing the screenplay and location scouting was the most challenging part for me," Douglas said. "We brought Leslie Anthony in to help with the script and then it was lots of hours of trying to figure out how to bring it all to life with visuals."

Filmed over three days, the video—funded by the Whistler Community Foundation and Whistler Blackcomb Foundation—was a blast to produce, Ruddy said.

"There was a lot crammed into those three days in terms of location changes," she said.

"Having never really been involved in a video project like this, it was really interesting to see what goes on behind the scenes, but we were really fortunate with the people who said yes we'll be a part of this."

One cameo in particular is a highlight for Ruddy—firefighter and Whistler FireSmart coordinator Scott Rogers, in full turnout gear, showing up out of nowhere in the forest to offer some helpful fire safety tips.

"Scott just sidled in from the side—every time that just makes me laugh," she said.

With the video, Ruddy hopes the community gets a "baseline understanding" of the actions we can all take, whether we're here for a day or a lifetime.

"As a small organization we had to figure out what we could do that would help other people get the word out—we can't possibly be in touch with every guest, we can't possibly be in touch with every resident—but by creating something like this we give everybody the ability to share these messages that have been kind of curated by the environmental non-profit sector in town, as the priority messages," she said.

AWARE is currently running an online donation campaign to celebrate 30 years. Head to awarewhistler.org to contribute.