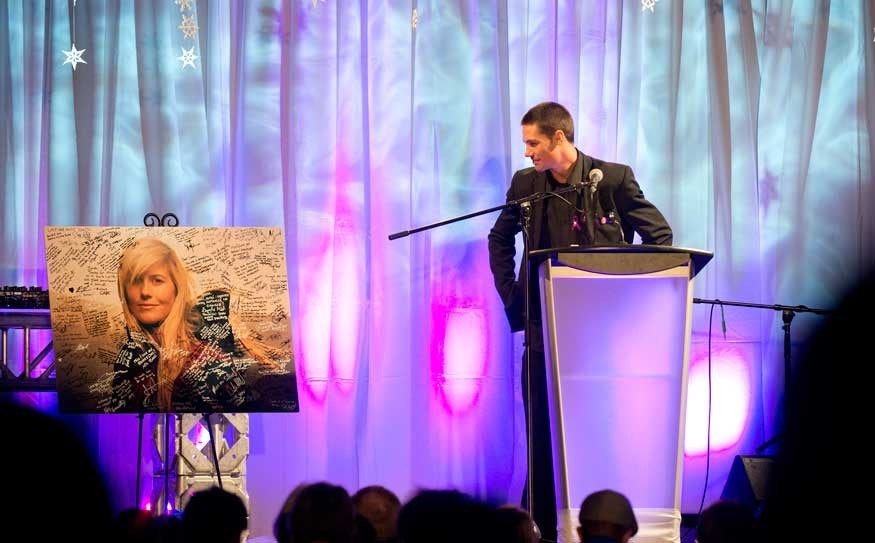 Strength in a smile An emotional Rory Bushfield draws strength from a photo of his wife Sarah Burke at her celebration of life on Tuesday. Photo BY bonny makarewicz<a href="http://www.bonmakphoto.com/">www.bonmakphoto.com</a>

Some came to mourn, others to celebrate a life that was almost too big, too extraordinary to be real — and one that ended far too soon.

But the celebration of life held on Tuesday night at Village Square for freeskier Sarah Burke was not about closure — nobody was saying goodbye. Friends and family members vowed that Burke's story would live on, and that they would continue to tell it. Words splashed across the screen in Village Square said it best — "One light will not go out if it lights 1,000 more."

Andrew Goatcher, a grade school friend of Burke's from Midland, Ontario who took the stage to share stories of their years together said: "Nothing will be the same without her, but everything is better because of her."

On Tuesday afternoon Burke's fellow skiers and family members held a memorial in the Blackcomb superpipe where she learned many of the tricks that made her an international star. Almost 200 attended that event, which included a three-helicopter flyby, and a speech and song by Sarah's sister Anna.

It was fitting, they felt, to celebrate Burke's life with noise rather than silence.

The evening celebration, which included a slideshow, speeches and another big "moment of loudness" — raucous cheers, loud applause, wolf whistles and more, instead of the more traditional moment of silence.

Burke, 29, passed away on January 19, after sustaining a brain injury several days earlier during a halfpipe crash in Utah. A funeral was held afterwards, but family and friends had always planned a Whistler memorial near the end of the freeskiing season so her extended "ski family" could be there. The end of the season starts next week with the World Skiing Invitational/Association of Freeskiing Professionals Championships in Whistler.

The crowd spilled out of Village Square down the stroll and the patios were filled with well wishers, including a loud group of Sarah's fellow freeskiers on the patio of the Amsterdam pub who would occasionally start chanting "Sarah! Sarah!" It was likely the largest gathering in the square since the 2010 Winter Games.

The crowd included Burke's family members, her closest friends, her colleagues, kids who looked up to her, or were lucky enough to have had her for a coach, as well as hundreds more who didn't know her well but had followed her amazing career.

But while Burke was a skier first and foremost, that wasn't the thing that her father Gord Burke was most proud of. He walked on stage in a t-shirt, overwhelmed by the show of support and sympathy.

"She's been a superstar in everything her whole life," he said, "but I've never been more proud of anything than for the kindness she showed other people."

He told a story of a trip to Whistler 14 years ago —Burke was 15 at the time, and would have been in her second year with Momentum Ski Camps on the Blackcomb Glacier. He gave his daughter some money to buy something special for herself to remember the trip while he enjoyed a drink with friends at a local pub.

An hour went by and there was a tap at the window. It was Burke. "And she had spent all of her money to remember the trip on a shirt. For me."

Gord wore that same cherished shirt to her celebration of life, by now full of holes from so much use. "I love this shirt," he told the crowd.

Kindness was also the theme that Burke's husband Rory Bushfield focused on in his speech.

He told the crowd about a day when he and Sarah were rushing from their Squamish home to get to the airport for a Costa Rica holiday. It was raining and Bushfield was anxious to get started.

Unfortunately Burke's jeep wouldn't start, so Bushfield jumped up and quickly transferred their luggage to his truck. When he was done, Burke was gone.

"I'm looking around, and there she is in the ditch," he said. "She's down there with a kid from down the street with Down syndrome who's always concerned with keeping the water moving through the ditch... She says to me, 'hold on a second, we're clearing the ditch here.'

"She drained the ditch and we made the flight like always... but the moral is that she was so kind. It wasn't the gold medals and all the amazing things she did, but all the little things."

Trennon Paynter, who has been Burke's halfpipe coach for years — back when athletes had to cough up their own money to hire a coach for a self-funded national team, with no official status or funding for the sport in Canada — talked about the influence she had on her sport and the tenacity that would help the sport into the Olympics in 2014.

She didn't do it for money or fame, Paynter said, but because she loved it, and she wanted other women to do it with her. Some of her toughest competitors on the pro circuit were her former students at Momentum — but on her best day, Burke was still the girl to beat.

Paynter said her death has brought the freeskiing community closer together, and especially the national halfpipe team.

"It will never be the same without her, but when we walk into the Olympic stadium in Sochi, Sarah is going to be the one leading the team."

In the crowd, Sophie McGregor said she was lucky enough to have Burke as a coach at Momentum one summer. An aspiring freestyle skier, she will always remember that summer.

"She was so nice and bubbly and friendly and happy," said McGregor. "I was worried that I wouldn't be included because I was so much younger than the other girls in the group, and she always made sure that I was included."

The first time she tried a 360 spin over a table, Burke was there to encourage her and boost her confidence.

"She was a great person. I'm here to show her how much she meant to me and all the girls in skiing," said McGregor.

Pemberton's Yuki Tsubota, one of the top up and coming freestyle skiers in Canada, had a breakthrough season of her own this year and placed fifth in a World Cup slopestyle event. She also had Burke as a coach one summer, and credits her for blazing the trail for other women in the sport.

"It was the coolest thing in the world to ski with her," said Tsubota. "I definitely looked up to her. I wanted to ski with her, ski like her. She always skied like a guy, she was so strong. She made all of us better. She was an icon for all of us."

The celebration of Burke's life will go on in many ways. The AFP has renamed their overall champion trophies, to be presented in Whistler on April 22, the "Sarah Burke Award."

Momentum Ski Camps is offering a Sarah Burke Scholarship to a young female skier that best embodies Sarah's spirit, and will rename their weekly "Happy Camper Award" as the "Spirit of Sarah Award."

Other tributes are also being planned by Momentum and others.