For first time, report data was benchmarked against other B.C. communities
Dec 10, 2020 7:00 AM By: Brandon Barrett 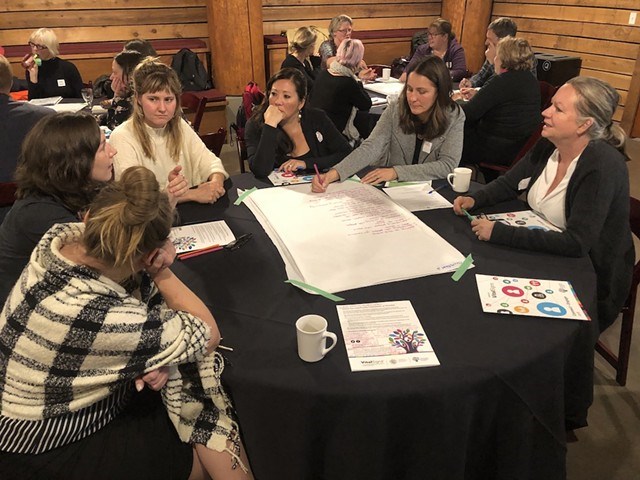 The recently released Vital Signs report—renamed “A Vital Exploration” for 2020—offers a snapshot of pre-pandemic life in Whistler that was, for the first time, benchmarked against several other B.C. communities.

Compiled by community foundations in Whistler, Squamish, West Vancouver, Sunshine Coast and Bowen Island, the report gauges the well-being of each respective community, and was based on 2016 census data, Vital Signs reports from the participating foundations, and several research studies from the past four years.

Whistler Community Foundation (WCF) executive director Claire Mozes said the intent was “to see what other communities were doing well and where other communities had gaps, and to use it as a learning tool for all of us.”

There were several notable trends from the report, including changes in population growth, the workforce and housing.

(The report can be read in full at whistlerfoundation.com/work/vital-signs.)

Whistler experienced the highest population growth among the benchmark communities, growing by nearly 21 per cent between the 2011 and 2016 census. And while it is no surprise that Whistler’s demographics skew younger than the average community, it’s notable that almost half—49 per cent—of the resort’s resident base falls in the 20-to-39 age bracket, with no other community hitting higher than 31 per cent (Pemberton).

The data, along with the WCF’s recent Vital Café on youth health and wellness, convinced the non-profit that more outreach needs to be done to engage Whistler’s young adults on the issues that matter most to them.

Mozes said engaging youth is a challenge across the participating communities, but particularly in Whistler, with it’s annual influx of seasonal workers—who, it should be noted, are not counted in the census.

Coun. Jen Ford believes Whistler might benefit from a program similar to one in Abbotsford, where young adults shadow council members to learn the ins and outs of local government.

“They are the frontline workers of our community. They are pouring coffee and running chairlifts,” she said. “This town doesn’t operate without that demographic. Sure, they may not have a vote in a municipal or a federal election, but does their impression make or break our community? Absolutely.”

“I think the 2020 census, we’ll see a different makeup here in Whistler,” said Vital Signs project coordinator Libby McKeever, noting the recent shift in immigration patterns (at least, pre-COVID) with, for instance, an emphasis on bringing in trained chefs from Morocco over the past year-plus.

“I know the Whistler Multicultural Network has done great things as far as getting into businesses to try and talk to employers about cultural shifts and opening their minds up to how people do things. It’s slow, but it’s coming.”

Whistler and Pemberton led the way in terms of employment among the benchmark communities, with 86 per cent of residents employed in both communities, compared to just 52 per cent among the admittedly older population of West Vancouver, for instance.

Unsurprisingly, Whistler’s primary employment sectors looked much different from the other communities, with sales and service making up the lion’s share of the workforce, followed by trades and transport, management, and other sectors.

“If you look at the employment sector compared to some of these other communities, sales and service stands out hugely,” said Mozes, highlighting the volatility of the sector that has been put into full view during the pandemic. “When you think about those jobs, they’re not jobs you can generally do from home. They’re not jobs that you can generally do in the same amount of hours, so if those fold, that’s pretty big compared to some of the other communities. I think Whistler’s more volatile in some ways.”

Housing and affordability, as they have for years, remain top of mind for many Whistlerites, with 45 per cent of renters considered to be in “core housing need,” which occurs when housing falls below at least one of Canada Mortgage and Housing Corporation’s adequacy, affordability or suitability standards, and occupants spend 30 per cent or more of their income on housing. That is just above the B.C. average of 43 per cent, and below West Vancouver (58 per cent) and the Sunshine Coast (52 per cent).

Only West Vancouver renters pay more in shelter cost than Whistlerites, who pay, on average, roughly $1,800 a month. Owners, meanwhile, pay close to $2,000 a month, which, again, was only eclipsed by West Vancouver.

Thirty-two per cent of Whistler homeowners are considered in core housing need, higher than the B.C. average (21 per cent), and higher than all of the other benchmark communities.

Whistler also had the lowest proportion of residents in subsidized housing, at eight per cent, when compared to the other communities, and, remarkably, a whopping 61 per cent of privately owned dwellings in Whistler are unoccupied or temporarily occupied. In Squamish, by comparison, that number is only at four per cent, while the B.C. average is nine per cent.

“I don’t really know what that answer is, but when I look at it, that is unused housing, and it’s a lot,” she said. “We have the space here, we just have to figure out how to fill it.”

Overall, Sea to Sky residents reported being in relatively good health, although either end of the resort’s age scale were more likely to feel social disconnection.

Based on 2018 survey data from School District 48, nearly 20 per cent of youth in Whistler, Squamish and Pemberton (grouped together in the survey) reported experiencing depression, while 24 per cent reported feelings of anxiety or panic attacks, and just over 20 per cent reported needing emotional or mental health services, which mostly aligned with provincial averages.

“I think those numbers are high and a lot of it has to do with belonging,” McKeever said speaking generally about young people. “A lot of youth here, 18 to 35, are here on their own and they’re away [from home] for the first time.”

Whistler seniors, meanwhile, were more likely to live alone than the other comparative communities, with a third, or 950 people, living on their own.

It is admittedly a tough data point to interpret, as Whistler’s seniors are typically more active and self-sufficient than in other regions, but the lack of specialized healthcare services here could also skew the numbers, as seniors may be more likely to leave Whistler in search of care.

McKeever said COVID has only exacerbated the social isolation Whistler’s seniors may be feeling.

“Because of COVID, there’s a lot of mental health issues and as people retire, not being out in the community meeting and greeting people and having that social interaction is difficult,” she said.