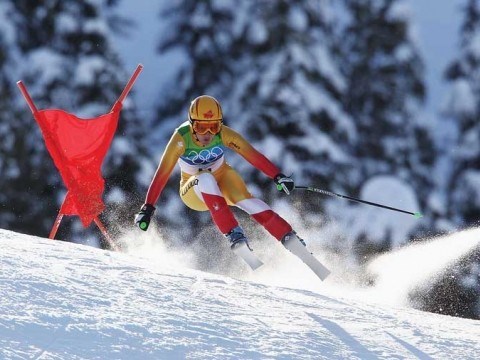 The women's downhill course was nothing short of unforgiving Wednesday, with girls crashing, going off course, landing on one ski in the off-camber sections, getting air off every knoll and bump, and generally holding on for dear life.

But American Lindsey Vonn didn't seem to be bothered by the rough course and crashes. She put in a near-flawless run down the Franz's course to claim the Olympic downhill title.

Vonn, who was said to be nursing a deep shin bruise, finished in one minute, 44.19 seconds. Teammate Jula Mancuso picked up the silver medal with a time of 1:44.75. Austrian Elisabeth Goergle took the bronze in 1:45.65.

Split times told the story, as only a handful of skiers managed to get faster as the day went on.

At one point Britt Janyk was within 0.12 seconds of the lead, but after going wide on a turn she was dropped off the pace.

"It is a bit of a momentum course," Janyk said. "I think the snow is in great shape so any error, any slip-up, and you lose time. I was a little too low on one gate, but when you're in a race you just have to go with it. I was really happy that I was pushing the limits, pushing the line, while trying to stay really relaxed on my skis and be in the moment. I wouldn't have changed anything."

Janyk's time of 1:46.21 was good for sixth place. She finished less than half a second off the podium.

After one official training run - which was actually two partial runs - freezing temperatures overnight and clear skies meant the course was hard, rough and fast. It surprised and intimidated many of the racers.

The course got bumpier as the race went on, with some of the top-ranked skiers in the world struggling - including past champion Anja Paerson of Sweden, who joined the long list of DNFs after a huge flight ended in a crash just before the finish.

British skier Chemmy Alcott says the crashes only prove how difficult the course can be.

"We've had crashes, DNFs, that's kind of what you want to see because this course was really hard and you want to challenge the top skiers," she said. "It seemed like you were either in the air or on edge the whole time, you can't relax for a second."

Janyk had similar respect for the course.

The other Canadians didn't fare as well as hometown skier Janyk. Emily Brydon finished 16th and Shona Rubens 24th. Georgia Simmerling, a rookie on the team from the Grouse Mountain Tyees, elected not to race in order to concentrate on other events.

For her part, Mancuso said the race was a redemption. She has not earned a podium since the World Cup test events in Whistler two years ago, battling an injury and a slump.

"I really liked the course," she said. "There wasn't a lot of tucking going on up there. It was pretty high-speed, the snow was really firm and out of the start it just turns. I like when you don't get into your tuck and (a course) follows the natural terrain. There was a lot of jumps, a lot of stuff going on, and it was a really good race."

There were a few scary moments. Paerson went down hard but managed to stop herself on the edge of the run. Edith Miklos of Romania did a somersault on the course when she botched a landing and slid through two sets of safety gates. She was taken off course by a helicopter long line. She was later diagnosed with a torn ligament.

As a result, the course crew made a few changes before Thursday's super combined.

While the U.S. has had some dominating skiers in the past, Vonn is easily the most dominant of this generation and will be remembered as one of the best American racers of all time. She has won two overall World Cup titles and is on pace to win again in 2010. She also has 60 World Cup medals to her credit.

But all that pales next to her gold medal in the women's downhill on Feb. 17. With her bruised shin there was some question whether Vonn would even be able to compete. But with training on the women's downhill postponed by weather, and freezing cream and daily treatments of everything from cheese to lasers, she was able to suit up and win the first Olympic gold medal in downhill by an American woman.

"This is probably the bumpiest course I've ever run and that's the worst thing you can have for a shin injury. It was definitely a challenge to make it down," she said. "I was focused and determined and tried to think about it... but the last jump definitely made me think about it more. It's all over now, I finished, I won and I'm really happy."

Vonn decided to become a ski racer after meeting U.S. legend Picabo Street in a ski shop when she was nine years old. She says she hopes to be the same kind of role model to the next generation of American skiers coming up behind her.

Coming into the Games, Vonn was expected to win as many as five medals. However, with her shin injury she said she may have to pull out of the technical events.

"The pressure for me is gone, I got exactly what I came here to get," she said. "I know everyone expected me to do it, but it's not as easy as saying 'you can do it.'
"I'll go home happy no matter what happens."