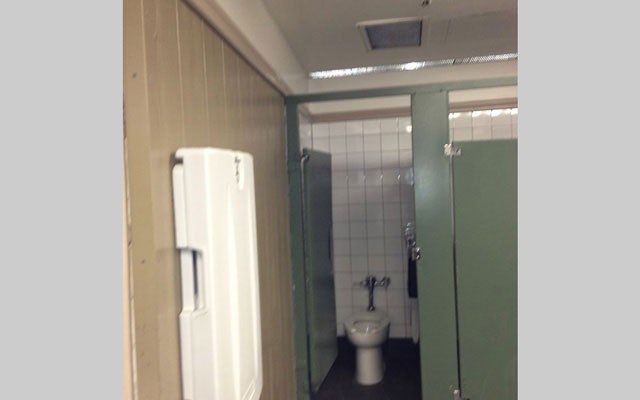 A woman who was covertly recorded using a Whistler Village washroom last summer is calling the recent sentence handed down by a North Vancouver court too lenient.

Jonathan Stringer escaped jail time after he was given a suspended sentence and put on three years' probation after pleading guilty to voyeurism charges in provincial court last Tuesday, March 10.

The 28-year-old man was arrested on July 20, 2014, after a Vancouver woman noticed the blinking light of a camera phone recording from the ceiling of a washroom stall in the Carleton Lodge. After the phone was turned over, police discovered 18 seconds of shaky footage recorded inside the washroom that also showed Stringer's face.

"I think (our justice system) is way too lenient and it's sending sexual predators back out into society who still have these demons they haven't dealt with, and they're just going to prey on the next victim," said the woman, who cannot be identified.

The North Vancouver man has been convicted twice previously on similar offences, and Ashton noted numerous mental health assessments that have determined he is at a moderate risk to reoffend.

Defence lawyer Nancy Adams noted her client is "significantly developmentally delayed" with a low IQ, which contributed to his voyeuristic tendencies.

Stringer graduated from high school and had been working for 10 years stocking shelves at a grocery store. He was fired shortly after his arrest, but has recently been employed as a dishwasher at a North Shore restaurant.

Since his arrest, Adams said, Stringer has attended a psychotherapy outpatient program and reduced his alcohol and pornography consumption, which doctors said have contributed to his addiction.

When delivering his sentence, Judge Steven Merrick told Stringer, "I accept that you are genuinely ashamed."

Stringer's probation conditions prohibit him from possessing a recording device, unless it is a phone with the video function disabled. He is also banned from entering unisex washrooms or accessing pornography, conditions that his victim feels aren't enough to stop him from reoffending.

"I'm really not convinced (his conditions) are going to rehabilitate him in any way. They mentioned he's a moderate risk to offend, and that's scary," she said.

The woman also spoke about the lingering effects Stringer's crime has had on her over the past months.

"I have post-traumatic stress disorder from it. I was off work for a couple months, I was having problems sleeping and having weird dreams about being watched. It definitely affected me and made me fear for my safety."

-with files from the North Shore News.