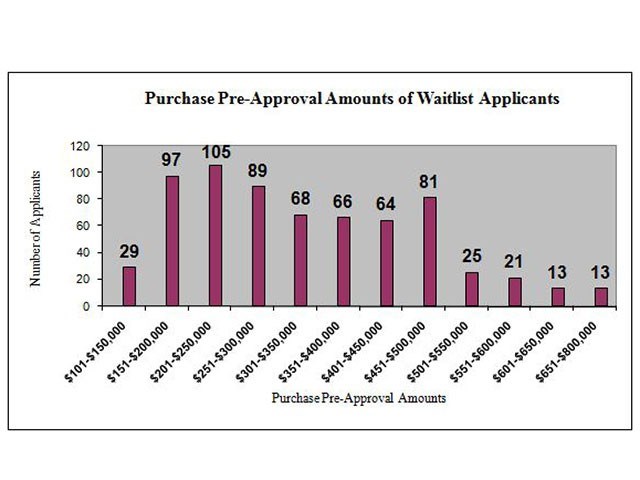 When her name came up recently to buy a two-bedroom unit in Spruce Grove, she grabbed the opportunity because the home was close to the village and the sports centre and was a good fit for her and her eight-year-old daughter.

She put her three-bedroom unit at Bear Ridge up for sale at its maximum resale price at $379,000.

After more than three months, it still hasn’t sold.

“With restrictions and over $350,000 the places are very, very difficult to sell,” said Taguchi.

The end unit, which is more than 1,300 square feet, has been offered to everyone on the Whistler Housing Authority waitlist.

Now any employee in Whistler has the chance to buy the home and Taguchi has been running ads in the paper to entice buyers.

This is happening despite the fact that there are 670 applicants on the waitlist for employee housing. That’s the most ever in the WHA’s history.

WHA general manager Marla Zucht believes two reasons are at play — affordability and the opportunity to buy at new projects.

Roughly one year ago the WHA noticed a push back from the waitlist applicants as those units tied to the Vancouver housing index climbed out of their price range.

The units were then switched, upon resale, to a much more modest appreciation formula.

She does not believe the switch to a new formula on the Bear Ridge units, is a factor affecting sales. Rather, Zucht believes the price of the units is the reason there is less interest in places like Taguchi’s.

The smaller units, which are cheaper, sell quickly — after being offered to the first few people on the waitlist.

Likewise, Taguchi had several offers on her place in the $320,000 range. She was not willing to part with it for that price.

Statistics from the WHA show more employees are pre-approved for mortgages up to $350,000. As the price-point gets higher, the numbers drop off.

“We’ve been seeing this for probably the last six months,” said Zucht. “We started seeing it when the units crested about $350,000. That seemed to be the affordability threshold for people.”

Fewer people can afford to buy at the higher prices and those who can have other options in the unrestricted market.

The other factor at play is the promise of new projects on the horizon, in particular the Rainbow development, which will deliver duplexes and single family homes — targeting the higher end of the waitlist.

The WHA is trying to encourage people not to hold off for the promise of Rainbow. If they buy a different unit they can still keep their names on the Rainbow waitlist, albeit at the bottom of the list.

“We keep telling people not to do that, really, because they’re putting their eggs in that basket,” she said.

“But people don’t want to lose their position if they’re close to the top of getting a high priority selection at one of those new projects.”

Almost every day new applications for the waitlist come through the WHA doors.

Of the 670-plus people on the list, 21 per cent already own in other price-restricted units and are looking to move within the WHA inventory, two per cent own market units, five per cent live in Pemberton and two per cent in Squamish. The majority live in market rental units.

The pressure does not appear to be easing off.

Every year the WHA processes approximately 100 applications. This year it has surpassed that number in July.

Hundreds of new employee-restricted units are approved for development, made up of Rainbow, the athletes’ village, the Shoestring and Lakeside projects. Some of the units are expected to be ready for occupancy sometime in 2008.